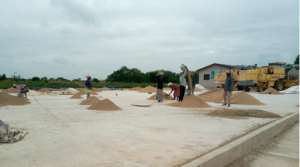 Rice farmers who are cultivating at the Weta irrigated field in the Volta Region have called on government for support to enable them reclaim the hectares of irrigable lands which is submerged under water. The farmers spoke to officers from the National Commission for Civic Education in the Ketu North Municipal Directorate when they visited Avalavi Rice Farm.

According to Seth Amamu, who is a farmer and machine operator at Avalavi Rice Farm, nearly a quarter of the irrigated area allocated to the farmers has been submerged underwater for some years now, causing farmers to lose millions of Cedis every year.

The farmers have tried helplessly to reclaim the land by their collective effort but to no avail, hence the call on government, especially Ghana Irrigation Authority to intervene.

Government’s intervention they say will help them contribute more effectively to avert the looming food insecurity in Ghana.

Some of the farmers also complained bitterly to NCCE officers that, the cost of fertilizer, herbicides and insecticides are something they can no longer afford due to the high cost of purchasing these chemicals. They also need of machines that can separate chaffs from the rice and also help them dry the rice, since it is becoming hectic and affecting their health.

According to the farmers, they cannot work in the drains for the water to run past the farm causing the whole area to flood. Humans and combine harvesters cannot go onto the field to work, the land has become too swampy, and they are losing all their produce.

Some youth in the Weta and its environs told the Ketu North NCCE Officers that, they are interested in farming, so government should also come and work on that land for them.

The Weta irrigation project owned by the government of Ghana was constructed by the Chinese in June 1982. The field is being cultivated mostly by women.