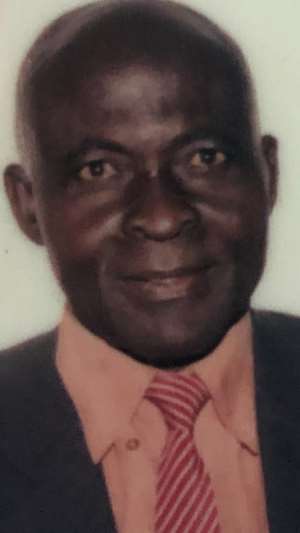 William Wilson Kwakye, who died in Accra on 11 April 2022, aged 83, was an exemplary businessman who, single-handed, built himself a business empire as resourceful as it was enigmatic.

His nephew, Professor Kwame Karikari (former Director-General of the Ghana Broadcasting Corporation and now one of the most prominent educators of journalists in Africa as well as Ghana) describes Kwakye as “a very strong- willed person”, who “was eager to leave the small town of Awisa for adventures in the city of Accra and beyond. To begin with, he moved to Accra and enrolled at the Secretariat Business School (now Accra Technical University.)

After qualifying at the Secretariat Business School, he obtained employment as a clerk at the then Industrial Development Corporation (IDC). Prof Karikari says “it was by his own hard work and vision that he saved enough money to travel to seek a better life in the UK, arriving there in 1959.” He qualified as a chartered accountant in the UK in November 1961.

During his student days, William Kwakye was a resident of Birmingham and Coventry. He had a very good sense of humour and he once recounted to me that whilst working part-time in Birmingham, his boss, unable (or unwilling) to learn how to pronounce the name “Kwakye”, chose, instead, to call him “Mr Kaunda”.

(Dr Kenneth Kaunda, the late former President of Zambia, was one of the few African leaders who used to be seen on television in the UK at the time. That was the period during which many African countries (like Zambia) were fighting for their independence. Dr Kaunda as leader of the Northern Rhodesian African Congress (later United National Independence Party, UNIP) was one of the African leaders one of those leaders fortunate enough to be noticed by the British populace. So his name stuck in the mind of Kwakye’s British boss.

Said Kwakye: “Everyone burst out laughing whenever the boss yelled loudly: “Mr Kaunda, over here pleases!" We couldn’t tell whether he was doing that in jest or not. But I didn’t show any resentment, and as a result of accepting this anomalous treatment of my name by the boss, I became quite popular at the work-place!”

It was during the time Kwakye was a student in the UK that I met him in London, through a mutual friend, my class-mate from Kyebi Government School, Kwasi Frempong. He also knew my brother and his name-sake, Ernest Kwakye (who later changed his name to “MacKwakye”, presumably because he wanted the British to be able to pronounce his name correctly, without having to call him Mr ‘Nairere’ or something -- after another African leader of the time, Julius Nyerere of Tanzania!! )

William had managed to acquire a small car in the UK, and I recall with fondness, many a time when we went to enjoy ourselves in a pub or visited friends’ homes. I never ceased to marvel at his ability to find his way round London’s millions of sometimes obscure streets.

I lost touch with him until 1970, when unexpectedly, he came to pay his respects to me in my office at the Daily Graphic, w hen I was editor of the paper. He was then importing goods from the UK to Ghana, at a time when there was a shortage of many goods here. His energy and business expertise were enormous and unknown to me, he was engaged in several business ventures in Ghana. He acquired land in many areas of Accra and built houses on them, which he either sold or hired out.

He had several houses in North Labone, the Trade Fair area and East Legon. He also expanded his business interests into the exportation of pine-apples to the UK – a most complex business which involved mastering the demands of airfreight and complicated customs requirements. Simultaneously, he was operating a salt business in Accra.

Although he was obviously doing very well, Kwakye’s life-style remained simple. And he never lost his gregarious nature. He had a winning smile, and never forgot an old friend or acquaintance.

Kwakye’s beginnings showed no sign that he would grow up to become a wealthy businessman of great substance. The third and youngest of three brothers, he shared the name “Kwame” with the elder two. So at home, he was called “Kwame Kuma” (Little Kwame).

His biological mother was called Abuakwaa. She died when Kwakye was a baby of less than two years of age. Thus, he was breastfed and brought up by his mother's elder sister, Abena Agyekumwaa.

As a young boy, “Kwame Kuma” was noted for his great interest in practical, technical activities, such as working with machines and building things. His business acumen led him, whilst in middle school, to make artificial flowers which he sold in Awisa as well as further afield – at Swedru and Akim Oda – which showed how adventurous he was, even at that early age.

Those who knew his roots respected him greatly and he was enstooled in August 1982 at Anyinase Akim and given the stool name, Nana Okyere Krofa the 2nd. His chiefdom was over Adumadum in Akim Awisa, and also covered the Bodwesango people, who had migrated to Akim Awisa in ancient times. It was not a small chiefdom, for he had to be sworn in at the Akim Oda palace.

Kwakye was a “traditional” chief in outlook, and is survived by no less than thirteen children.

My wealth exaggerated; it’s crass to define me by my wealth ...
33 minutes ago

We need peace in Bawku, we cannot make our children inherit ...
33 minutes ago