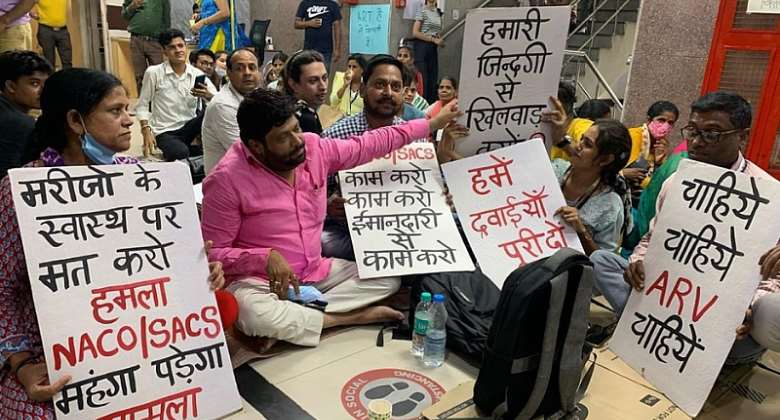 Indefinite sit-in began on 21st July 2022 outside the offices of India’s AIDS programme of Ministry of Health and Family Welfare to demand an end to the frequent stockouts of lifesaving HIV antiretroviral medicines. “We will not end the sit-in in Delhi outside the office of National AIDS Control Organization until there is a concrete action taken by the government to end the stockout, and our people in different states of India confirm that medicines have reached them,” said Hari Shankar Singh of Delhi Network of Positive People (DNP Plus).

“Dolutegravir and some antiretroviral medicines for children are out of stock at several places across India. These lifesaving antiretroviral medicines are very important for people living with HIV as it helps them live normally, fully, and stay virally suppressed (which also makes HIV undetectable, and untransmittable). In some states of India, drug stockouts are occurring since last five months. In Delhi, some antiretroviral treatment centres are giving medicines for only three to seven days. At some centres, there is no medicine left,” said Manitosh who is taking HIV medicines since 2013. He is also a part of DNP Plus.

Hari Shankar Singh added: “People in Delhi should get antiretroviral medicines for a month but in several hospitals these medicines are out of stock. As a result, people are given medicines for three or four days, due to which they have to run around the hospitals more often to collect the doses. More out-of-pocket expenditure on transport, loss of work and loss of wages, waste of time, and sometimes, this frustration and difficulty in coping or adhering to treatment, leaves them little choice but to stop taking the medicines altogether. In several parts of India, medicines have been out of stock for past five or six months.”

Taking antiretroviral medicines regularly is vital if one has to stay healthy and virally suppressed. That is why they are demanding that stockouts must end, and people should be given at least a month’s supply of medicines in advance (and not asked to come back for re-fills every three or four days).

Hari Shankar Singh confirmed to CNS (Citizen News Service) that several rounds of meetings and negotiations were held with the officials of Government of India’s National AIDS Control Organization in the past five months. But sadly these talks have failed in ending the stockouts. That is why communities of people living with HIV were left with no option but to go on an indefinite sit-in outside the offices of National AIDS Control Organization in Delhi to press for their demands.

Officials of National AIDS Control Organization came out to meet the peaceful protestors who were demanding end of drug stockouts. These officials gave several reasons for the stockout or action they have taken to address the issue, such as, process of tender or bidding for procurement of medicines is underway, or they have asked State AIDS Control Societies or antiretroviral treatment centres of the government to purchase medicines meantime, or other such stopgap assurances. But people living with HIV are not convinced by these so-called assurances.

“HIV virus circulating in our bodies will not listen to these assurances and pleas, it will not respond to tender process or bid process or paper work or administrative delays. HIV virus will only respond to antiretroviral medicines, if we take these medicines on time regularly,” forcefully said Hari Shankar Singh.

On one hand government is promising to deliver on 95:95:95 goals (95% of people living with HIV should know their status (so they need to get tested), 95% of these are receiving antiretroviral medicines, and 95% of these are virally suppressed.

Vijay Singh, who is part of Love Life Society, said that "Government says that we should take medicines without any interruption, as adherence to antiretroviral medicines is so important. But failure to prevent frequent stockouts is making it very difficult for people to adhere."

Health is a human right

“We are demanding what is rightfully due to us, as a matter of human right. It is our constitutional right to take care of our health, and protect our health and wellbeing. People must be able to get their HIV medicines on time, and there must be no stockout - this is the assurance we need from government of India,” added Mona Balani, who is also a part of National Coalition of People Living with HIV in India (NCPI Plus).

Sahil, is living with HIV since he was 13 years old. He is the President of Om Prakash Network of People living with HIV (OPNP Plus) now, and echoed Mona’s statement that “I am joining the sit-in because getting lifesaving medicines is a matter of human right.”

Sadhana Jadon of NCPI Plus is living with HIV since 2003. She pointed out that “Not just we but even children are not able to take medicines without interruption due to these stockouts. It is a matter of our life and our children’s life too to ensure uninterrupted drug supply becomes a reality. Parents of these children often leave their work or suffer loss of wages and go to hospitals repeatedly to collect medicines for their children. How many times will they have to make these hospital-rounds to get the medicines? Why cannot they get longer duration supplies?”

Sadhana Jadon questioned that on one hand government rightly says that it wants to reduce “Lost to Follow Up” – that is, when people discontinue HIV treatment in-between. But on another hand, government itself is creating a situation like stockouts of medicines which will make it very difficult for people to adhere to the lifelong treatment."

Jai Prakash, who is part of DNP Plus team, said that "government is asking us to check files that why are so many people becoming "Lost To Follow Up" so we are supposed to visit them and try to bring them back to HIV care. But are these people in the government doing their work earnestly and sincerely? We have been raising the issue of drug stockout since past five months, we met the officials, wrote emails, called them on phone, but now we are so fed up and frustrated. Some people even had to sell their household valuables to purchase medicines from the private sector."

"We are not asking for alms but our right to seek healthcare and treatment. We are not begging, but demanding what is due to us - lifesaving medicines. They treat us as if they are doing an obligation by giving some medicines for few days only," added Jai Prakash.

Priya, who is part of Love Life Society, said that "One of the responsibilities of National AIDS Control Organization is to ensure uninterrupted supply of antiretroviral medicines for people living with HIV across the country. It exists to do this work among other responsibilities. At least they must do their part honestly."

India has estimated 2.1 million people living with HIV. If government has to deliver on the promise of ending AIDS by 2030, then it is vital to ensure that every person living with HIV receives antiretroviral therapy and remains virally suppressed - so that undetectable equals untransmittable becomes a reality. We can end AIDS now as we have the proven tools and approaches that work.