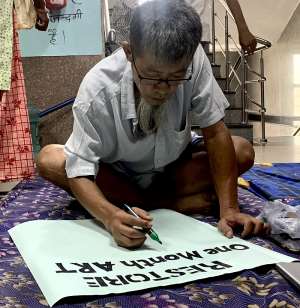 The indefinite sit-in of HIV affected communities which began on 21st of July 2022 has continued for over a month to demand end of stockouts of lifesaving antiretroviral therapy across India, and minimum one-month dispensation of medicines to people living with HIV nationwide.

2018 guidelines of India’s AIDS programme (formally called the National AIDS Control Organization of Ministry of Health and Family Welfare) states that people who are stable on HIV medicines should get medicine-supply of three months at every visit to the clinic. But people with HIV are reporting from several states that they are only getting medicine supplies for seven to ten days, after which they are supposed to go back to the medicine dispensing centre for a re-fill. Antiretroviral therapy is a lifelong and lifesaving therapy that helps people with HIV stay virally suppressed, live a normal and healthy life, and also become undetectable and untransmittable (science has proven that when HIV virus becomes undetectable then it also becomes untransmittable). Without these medicines, HIV virus will not be suppressed.

More alarming is that some people with HIV are being given medicines which are supposed to be given to children (paediatric doses). Jai Prakash, former President of Delhi Network of People living with HIV (DNP Plus) is one such person who has to take 11 pills daily as he has been handed over paediatric doses.

“One of our friends from Mizoram has shared with me about a small boy who developed full body rashes after being given antiretroviral medicines which were for adults (and not children),” shared Loon Gangte of DNP Plus who has led HIV and hepatitis-related treatment access movement for almost two decades from the frontlines.

Networks of people living with HIV are reporting HIV medicine shortages in several states of India such as, Uttar Pradesh, Bihar, Punjab, Haryana, Chandigarh, Uttarakhand, Manipur, Assam, among others. There was shortage in Delhi too but now situation is improving, said Hari Shankar Singh of DNP Plus. Hari has been part of the indefinite sit-in since its beginning on 21st of July 2022 when CNS (Citizen News Service) had spoken to him too.

“We are exercising our fundamental right to life as it is guaranteed by our country’s constitution in Article 21. So, we have the right to access lifesaving treatment because this antiretroviral therapy is our lifeline medicine,” asserts Cycy of DNP Plus.

Cycy rightly demands accountability as drug stockouts or shortages happen because “some concerned authority was not doing their job diligently or honestly.” India’s rollout of free antiretroviral therapy began in 2004. India has made commendable progress in expanding world’s second largest antiretroviral therapy rollout but there is no scope for complacency. For example, drug shortages will not serve anyone’s interest – it causes avoidable human suffering and pain, and harms progress of the government on its promise to end AIDS by 2030. We can only end AIDS if every person living with HIV can get uninterrupted supply of antiretroviral medicines, stays virally suppressed, and makes undetectable equals untransmittable a reality. This is not merely an #endAIDS goal but also a human rights imperative.

Loon Gangte said: “During past 17 years of India’s antiretroviral therapy rollout, this is the fourth time we are forced to sit-in to demand end of stockouts.” In the past 17 years, the supply chain issues should have got resolved as these essential medicines are lifesaving and treatment interruption is counter-productive and violation of human rights.

Previously, Loon Gangte and several other HIV activists had to stage a sit-in to demand end of medicine stockouts which lasted for one to six days at most, as authorities had swung into action, resolved problems and resumed supplies, thereby ending the sit-in. But this time the indefinite sit-in has entered day-32 (as on August 21, 2022), and still ongoing.

The government has been denying that there is any stockout. But then, why are people being handed over medicines for only 7-10 days, rightly questions Loon.

Hari Shankar Singh of DNP Plus said: “The National AIDS Control Organization or NACO is not accepting that there is a problem. They have done 7-8 rounds of meetings with us and given assurances that ‘they are trying’ and ‘only few people are affected’. But almost a lakh (100,000) people could be affected. Even if one person is not getting a month's supply of most effective antiretroviral therapy, then it is a problem and is not acceptable. Problems with tenders or supply chain had caused this issue, but the problem is not being addressed as fast as it should. There have been improvements since the stir began. For example, shortage of dolutegravir in Delhi is over now and one-month dispensation has commenced since few days. Paediatric medicines continue to be in short supply though.”

Is 17 years of managing India’s rollout of antiretroviral therapy programme not long enough to iron out supply chain related problems? “Those officers who are responsible for managing tender or other related tasks to ensure smooth supplies of essential medicines should work smartly, diligently and honestly,” said Hari. It is also high time to fix accountability.

Virus will not be suppressed by government's assurances but by medicines

Government officials are trying to persuade the activists to call off the stir. But activists including Loon Gangte are resolute and determined to continue the sit-in till minimum one-month supply of medicines becomes a reality for every person with HIV across the country. Ideally, the government should walk the talk and hand out three months of supply at every visit of those persons with HIV who are stable on the treatment, as per government's own guidelines.

“We are not sitting-in indefinitely to have meetings after meetings with officials of National AIDS Control Organization. We want them to work diligently and urgently, and resolve this issue instead. Unfortunately HIV in our blood will not get suppressed with official memos or government’s inventory or lists. HIV will get suppressed only with effective antiretroviral therapy. We want the medicines to be in the hand of people with HIV and not in warehouses. On one hand, the officials are denying the problem exists but on other hand, several of our people with HIV have ‘green books’ (document to keep a record of their treatment) which shows that they are getting supplies of few days only. If there is no shortage then why not give them a one-month supply?” rightly asks Loon Gangte. In fact, government should handout three months’ supply at every visit to the clinic (for people who are stable on the treatment as per the guidelines).

Loon added: “India takes pride that it supplies Indian generic antiretroviral therapy to most of the people on these medicines globally (over 90%). But in our own country why is there a shortage?”

“We are not fighting against any official or government but defending our lives as our life is at stake. Antiretroviral therapy is our lifeline. Our lives depend on these medicines. That is why we are asking for uninterrupted supplies of these lifesaving medicines nationwide,” said Loon.

India is undoubtedly recognised as the pharmacy for the world as it supplies majority of essential medicines in low- and middle-income countries. "We do not lack money, medicine, human resource, or a national programme, but because someone has not done his or her job earnestly, there are stockouts that affect our lives. Stockouts or shortages of medicine is so avoidable if adequate attention was paid timely and sincerely at every step," said Loon.

"We are fighting for our lives. These medicines help us stay healthy and live a normal life. Our life depends on them," added Hari Shankar Singh.

The goal of all governments globally is to end AIDS by 2030. With 100 months remaining, we cannot deliver on the tall promise of ending AIDS unless every person with HIV is able to get effective and uninterrupted supply of lifesaving medicines, and remain virally suppressed. There is no scope to fail: stamping out stockouts is an urgent priority if we are to deliver on the Sustainable Development Goals.

(Bobby Ramakant is the Editor of CNS (Citizen News Service) and a World Health Organization (WHO) Director General’s WNTD Awardee 2008. Follow him on Twitter @CNS_Health or read www.bit.ly/BobbyRamakant)