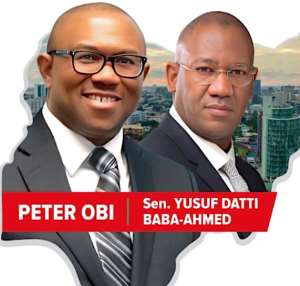 Peter Gregory Obi and Datti Yusuf Baba-Ahmed joint ticket has all the required capacity to unlock the chains of captivity Nigerians have been caged in by selfish politicians in a corrupt riddled economy for so long and to liberate them. With the opportunity the Labour Party has given Nigerians in the duo’s joint ticket – if one goes to north, east west and south one will understand that – hope has been awoken in the hopelessness of the nation.

Nigerians are very conscious of this opportunity especially the youths who do not want the golden chance to slip away have shown enough willingness for self-emancipation. They have grabbed the project with every sense of sincerity, power, enthusiasm, passion and commitment. Their campaign has been very consistent and emphatically clear, they want good and qualitative leaders, and in Obi and Baba-Ahmed they have scrutinized and found what they seem to have been searching for in leaders. The ovations from every part of Nigeria that welcomed Baba-Ahmed as the running mate of Peter Obi were very huge, massively impressively, pleasantly joyous and extremely intimidating.

I have said this severally that ordinary Nigerians have no problem with one another, as long as one is doing what is good, right and legitimate they embrace that person irrespective of the person’s religion or where she or he comes from. The problem has always been the policy makers – the politicians – who are supposed to be pacesetters, but always play the card of ethnicity and religion to divide us for their selfish interests. This bunch has held us in captivity for too long and Nigerian youths are in unison this time to say enough is enough.

While these politicians have always found ways to settle their differences, swum together in corruption and stuck with one another in their exploitation of the masses, we the ordinary Nigerians they exploit have not found a way to say no to their manipulation. Instead they use us and make us to fight each other while they share our collective wealth, and even sometimes they make us kill ourselves in defending them and their evil. The only time we summoned courage, did what was right and came together like them was the time of the #EndSARS protest, and we saw how scared and trembled they were. But again they had the upper hand as they forgot their political and religious differences and came together, planned their evil attack and brutally descended on us militarily and mercilessly. We will never forget this and it is pay back time. With our experience and the elders joining our OBIDIENT and YUSUFUL movement now we are currently more resolute and extra formidable to take back our country and they cannot defeat us again – we are better equipped now and armed than them. Our Permanent Voters Card (PVC) is our AK47 and we are going to “shoot at sight” any recognized destiny destroyer since 1983 who wants to become a governor or a lawmaker etc. We will show no mercy in this mission.

Nigeria is a hijacked country that is at the verge of collapse. In security, terrorists are firmly in control of some parts of the country with the advancement to capture more places. They collect taxes in areas they invaded and occupied with citizens gnashing their teeth in agony, helplessness and disheartenment. In the judiciary, people grief that justice could elude the innocent or be bought by the highest bidder based on controversial and questionable judgments judges have given in recent times. The worst was the shocking Supreme Court judgment that brought Hope Uzodinma of APC as the governor of Imo State. That judgment was a terrible blunder and a judicial tragedy, and there was nothing supreme about it. INEC, the constituted electoral body declared Hope as coming fourth in that election. But supposedly Supreme Court judges accepted votes that came from people that were not even registered voters and gave them to Hope and declared him winner. In that Supreme Court judgment on Imo State justice died in Nigeria.

Obi and Baba-Ahmed joint ticket is a masterstroke. The duo is young, intelligent and with inspiring, clean and successful records as public servants and in their private lives. They are not corrupt. Their academical records, age and sources of wealth are not in question or doubt. So they do not need to pay any SAN or swear any affidavit to defend a very simple question that needs a very simple answer. Therefore, while it is true that Nigeria is a hijacked project by political monsters and corrupt leaders and the country is at the verge of collapse, it is equally a fact to note that the emergence of Obi and Baba-Ahmed have risen hope of liberation and the hijacked country is at the verge of salvation.

Spread this message to those people who are still living in fantasies of how they will bribe us, and inform those dreamers who are equally asking for our political structures that in our quest for a better working Nigeria, we are strongly united, resolute and formidable, no religion, ethnicity, amount of inducement or political party can divide us. The voice of the people is the voice of God. Inform them that Obi and Baba-Ahmed are coming. On May 29, 2023the duo will be sworn in as elected president and vice unless something drastic and unexpected happens which is unlikely. Obi and Baba-Ahmed only need to be very conscious of their security now than ever.

While our hearts ache for the state of the nation today, hope beckons in Obi and Baba-Ahmed for redemption that the economic revolution happening in Rwanda is also possible in Nigeria.

I am just being OBIDIENT and YUSUFUL to Nigeria.