With vast lands, resources and bulge of youth, why must Africa go hungry and depend on imports for survival? 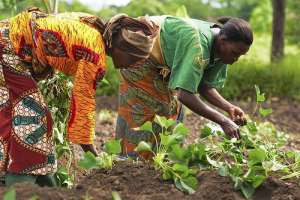 According to Luc Christiaensen, a lead Agriculture Economist with the World Bank, Africa’s food import bill has more than tripled, reaching about US$35 billion a year. Perusing the article further, one notices that much of this imported food could be produced locally, creating much-needed jobs for the bulge population of African youth which averages 19.5 years.

According to the World Food Programme, Conflict, COVID, the climate crisis and rising costs have combined in 2022 to create jeopardy for the world’s 811 million hungry people. According to the WFP, Conflict is still the biggest driver of hunger, with 60 percent of the world's hungry living in areas afflicted by war and violence. Events unfolding in Ukraine are further proof of how conflict feeds hunger, forcing people out of their homes, wiping out their sources of income, and preventing exports of goods from these countries. Also, the DW has reported that the ripple effects of Western sanctions against Moscow have raised food, leaving millions of Africans facing a serious food emergency.

Traditionally, it is more profitable for Africa to grow and export cash crops that rack in millions in foreign exchange crops like cocoa, coffee, cashew, rubber, etc whiles opening the import doors to bring in indigenous crops that are needed for everyday survival. Whiles the continent gets the needed foreign exchange from the exportable crops, we must now have a rethink with all that is happening in Europe, Ukraine-Russia to be precise, and maximize the opportunity of the gap this has presented and fill it.

It is a herculean task because the agriculture systems in Africa are as structured and organized as in Europe. The farming practice still dates mostly led by smallholder farmers, largely women. These women lack the financial strength to mechanize their farms and get modern technology to improve their yields and expand. Also, access to credit is another huge challenge to surmount to attain food sustainability. Still, on the finances, there must especially be more and sustained investment in rural public goods such as agricultural research and development, extension, irrigation, and rural infrastructure. African governments have only been spending 3-4 percent of their total spending on agriculture since the 1980s compared with around 8 percent in East Asia and about 35% in Europe according to the EU.

We must also remove trade restrictions. These restrictions should be left at the stage of pledges and promises and in speeches. It must materialize practically because whiles there may be excess milk in Uganda, Kenya will be buying milk from Switzerland. We create jobs and build economies of Europe whiles our youth in Africa remains jobless, farmers impoverished and currencies depreciated. Africa must trade among herself to retain most of the finances here.

We also lack the means to process their needed food. This point to one thing, Africa and the leaders of the day need better-coordinated planning and programming to overhaul Africa’s agriculture system.

In most African nations today is it cheaper to import because of the economies of scale because farmers cannot match the levels of production; the cost of production. This makes importation attractive to many more than going into farming which is all its associated challenges I have mentioned earlier.

The critical missing variables and why we are facing these food crises and soaring prices in Africa, especially in West Africa are labor (human capital), finances, and technology. If we cannot feed ourselves with all the freely given natural resources the creator blessed this continent with, then what we do? We must pet our get our acts together and prevent a cataphoric future about food, survival, and sustainability.