Is the late Sir John the epitome of official corruption in Ghana? 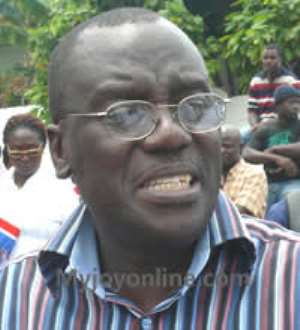 It is normally against the culture of any tribe worldwide, to speak ill of the dead. However, to succeed in the war being waged against official corruption in Ghana, if at all there is any such war, I shall discuss what has become the public knowledge about the level of official corruption allegedly perpetrated and perpetuated by the late Mr Kwadwo Owusu Afriyie aka Sir John.

Why is it that the Ghanaian politician, civil servant in higher position and a traditional overlord, see it as their right to use their offices to acquire huge illegal personal wealth within the shortest possible time of their assumption of office? I can’t get my head around this infatuation with corruption by our Ghanaian leaders.

In Ghana, sadly, politics has become an arena for people to amass great illegal wealth. The Ghanaian politician does not know what is to be of service to their country and humanity when they get the chance to be in office. For them, to hell with good name, although it is said in Proverbs 22:1 – “A good name is more desirable than great riches; to be esteemed is better than silver or gold”, thus, “a “good name” really speaks to your integrity”

For a period under former President John Agyekum Kufour’s administration, Sir John was appointed the head of legal services at the Ghana National Petroleum Corporation (GNPC). He was later made to act as the Deputy Chief Executive Officer of the corporation, only to be removed after a few months into the post, I heard.

His removal was alleged to have been caused by some malfeasance of the sort of embezzlement he committed. If it was true, then it was very disgraceful of him.

In the few days following his demise, a certain Kumasi Asokwa-based guy he had employed along with many other such workers for the forestry department came out weeping his eyes out in denial of killing Sir John through a curse he was alleged to have invoked on him (Sir John).

Nonetheless, he stated that Sir John had not paid him and many others he had employed into the forestry department for the past few months and again, he had reduced their wages or salary from the agreed contractual sum of eight hundred Cedis (Ghc 800.00) a month to four hundred Cedis (Ghc400.00) without informing them.

The man, an active member of NPP, had furiously stated his mind about the disgusting behaviour by Sir John to him (Sir John), amid probably threatening to curse him but which threats he might not have carried out. No wonder that when Sir John succumbed to an untimely Covid-19 infection, accusing fingers were pointed at the guy as the author of his death.

Let me ask a few questions in my attempts to prove whether or not Sir John was corrupt as per the immense wealth and properties he acquired within such a short period of time into his official political appointments.

1. Why did Sir John on his own reduce the salary/wages of those people he had employed contrary to the terms of their probably non-written but verbal contract?

2. Did he keep the difference of the salary/wages as reported, to himself, or he made it official to the Accountant Generals Department to save money for the country and his Forestry Commission at the expense of the poor workers?

3. What made him decide to half the salary/wages of the workers without their consent and still thought he had even done them a favour employing them in the first place?

4. How did he come to acquire the many properties he willed the members of his family and friends as has become a hot topic of discussion in the country to the detriment of the NPP government?

5. Was his salary that big enough to acquire him all the various plots of land at the Achimota forest and other such sought-after places in Accra and other parts of the country as stated in his will?

6. Did Sir John declare his properties before assuming the political posts he held in the country?

7. Is his will genuine or just a propaganda like any other by some political opponents to make the NPP government unpopular? I am only asking to build up my case of proving whether Ghanaian politicians are honest or dishonest.

I don’t feel the need to ask any further questions since in my candid opinion, he could never have acquired all the willed properties by his genuine annual salaries without resorting to embezzlement of some sort, if his will is authentic.

He is not an exception. Most, or almost all, of the politicians in Ghana are excessively corrupt and embezzlers.

Considering the period within which he acquired most of his properties, one can only agree with Fela Aníkúlápó Kuti’s lyrics of there being Vagabonds in Power (VIP) in Africa, although VIP means “Very Important Person”.

When will black people, especially native Ghanaians, learn that acquiring immense wealth through corruption is not good?

In both Matthew 16:26 and Mark 8:6, it is said, “For what profit is it to a man if he gains the whole world, and loses his own soul? Or what will a man give in exchange for his soul?”

How has it profited Sir John by acquiring all this wealth, if he had done so dubiously, only to lose his soul and become an object of laughter and a person of public discussion for all bad reasons?

I shall have proper time to write about the disgraceful infatuation with corruption by Ghanaian politicians, civil service bosses and traditional overlords.