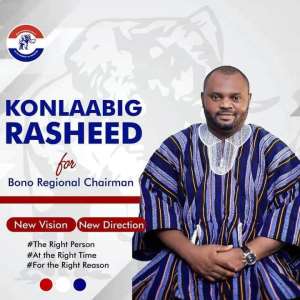 A Bono NPP Regional Chairman hopeful, Rasheed Konlaabig, says his major priority when given the nod to lead the party in the region would be to map out effective and results-oriented strategies that would ensure that the party recaptures all the seats it lost in the last elections.

Speaking to the media after submitting his nominations forms and a cash of Ghc 5,000.00 to the Bono Regional Executive Elections Committee at the regional NPP office in Sunyani last Tuesday, Mr. Konlaabig said he was extremely confident of becoming the next regional chairman of the party to provide a better leadership required to deliver a resounding victory come 2024 and beyond.

He further said “my campaign is purely issue-based. It’s a home affair. It’s not a contest that we need to wash our dirty clothes outside so I focus on the issues and educate the delegates on them. The decision lies in their hands and Insha Allah when the time comes, I know by the grace of Allah, I’ll emerge victorious at the end of the day.”

According to him, his message to the delegates is centered around hope and the need to reorganize the party, especially at the grassroot level, saying; “I am bringing a new energy, a new direction, bringing the entire party together to energize the grassroots for them to put up their best for us to consolidate our gains as a party.”

Mr. Rasheed Konlaabig is currently the Bono Regional NADMO Coordinator and has been a key figure in the party’s campaigns over the years.

Hottest Photo Reports
Catch up with all the political quotes from our politicians.
Advertise here
More from NPP News
ModernGhana Links
[Video] NPP can break the 8 with a new face, not Bawumia – Addai-Nimo
NPP elections; I stand tall among the other candidates - Prince Kamal Gumah
Break in communication affected NPP's performance in 2020—National Youth Organiser aspirant
TOP STORIES