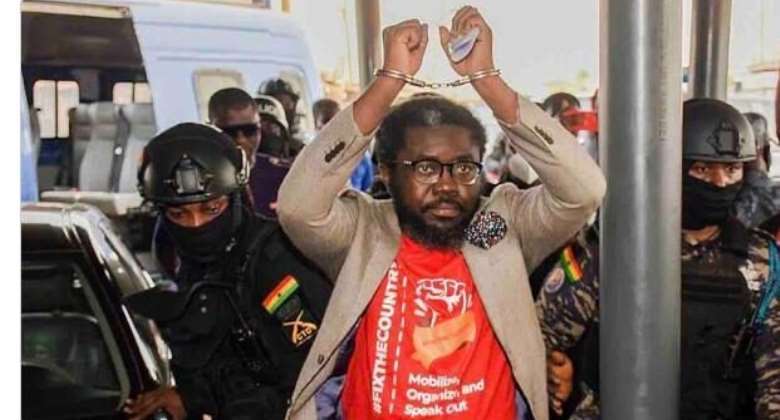 Convener for the #FixTheCountry Movement, Oliver Mawuse Barker-Vormawor has finally been released from police custody after his arrest on Tuesday morning.

Reports of the arrest of the activist went rife in the early hours of today as some members of the movement said his whereabouts were unknown.

From a post on his Facebook page, Oliver Mawuse Barker-Vormawor has confirmed that he has finally been released from cells.

According to him, he was made to spend eight hours in police cells having been apprehended at 7:30 am.

He was charged with careless and inconsiderate driving for failure to comply with road markings contrary to Section 28 (b) of the Road Traffic Act 761/08 on the East Legon Underbridge stretch.

“Just released. Arrested at 7:30 am. Stripped down and kept in police cells for 8hours, for a “road traffic offense” apparently,” Oliver Mawuse Barker-Vormawor has said in a Facebook post this evening.

His post adds, “I am not above the law. But why did the 7 Police officers take Albert Donkor from the Police cell, and go and shoot him inside the bush? Then for three weeks lie to his mother that he was assisting with investigation?

“How is this still a democracy?”

Meanwhile, Oliver Mawuse Barker-Vormawor has disclosed that he is not perturbed by his recent ordeals with law enforcement agencies.

He has revealed that the #FixTheCountry Movement has been awarded an amount of $50,000 by the Open Society Foundation to continue its activism.

More from Headlines
ModernGhana Links
'Shame on you; we were there to protect you but you throw stones at us, injure us' – Police to Arise Ghana protesters
Arise Ghana demo: Chaos erupts as protesters pelt stones, Police fire tear gas
E-Levy uncertainty should not be grounds to go to IMF; it will be suicidal – Prof. Lord Mensah
TOP STORIES