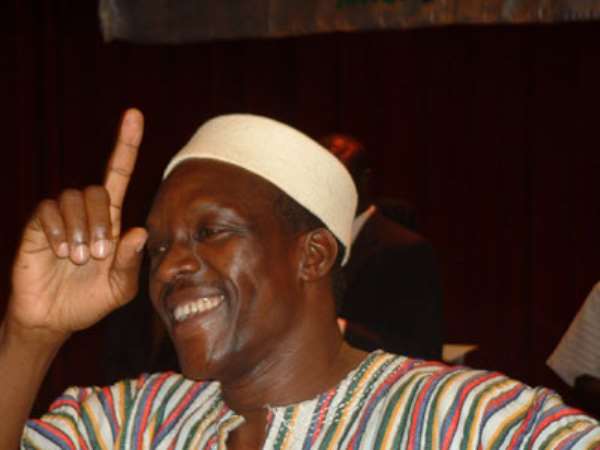 THE report of the UN arms embargo on La Cote d'Ivoire, and the invitation of South African President Thabo Mbeki to intervene in the crisis, compel us to revisit that grave subject of the Ivorien crisis as it seems to have finally vindicated Ghana Palaver's position on the subject, and possibly that of Minority Leader Alban Bagbin on Ivorien President Laurent Gbagbo's perception of Ghana's President Kufuor's role in the attempt to broker peace among the warring factions of that fractious country.

The truth is that La Cote d'Ivoire is for now a "former" sovereign state. It is presently split into two countries: the so-called rebel "North", and Laurent Gbagbo's "South".

Intensely nationalistic, patriotic sentiments with hate speeches and marches, the once peaceful streets of Abidjan where sex workers and revellers freely mingled with successful businessmen caught in great drinking and feasting, is now a dead city. Shootings, killings, muggings and vigilante operations top all.

Yet a President of the State is in office, sworn to protect the state of La Cote d'Ivoire and to do justice and protect all citizens without fear or favour, affection or ill-will.

The perambulations and sweet-talking, champagne-toting, plane-junketing, diplomatic exploits of our President Kufuor as Chairman of ECOWAS was predicted as being paternalistic and a great waste of time, to the extent that the "jaw-jaw" was more of "carrot-carrot" and not a "carrot-and-whip" affair. The pity is not that the numerous efforts of President Kufuor ended up a great waste of time and the resources of our HIPC country but just more the loss of early opportunity to heal the Ivorien wounds.

As time for the cat-and-mouse game stretched out, the hurt and animosity deepened. One of our columnists called for tougher sanctions very early and a rejection of the quaint concept of sovereignty, so long as the consequence of the "stupidity" of the leadership in conflict in the neighbouring state was destined to rebound and affect us economically, politically, socially and diplomatically.

The columnist also called Dr. Chambas and Nana Akufo-Addo names and tried to tease Mr. Kufuor and his team out of their outmoded diplomatic suits and 'agbadas' without success.

Appeasement in international relations has never worked, and it is a wonder that in Year 2004, this moribund doctrine is being perpetrated by the ECOWAS leadership. To the extent that Laurent Gbagbo saw himself as a President of a sovereign state, he was bound to deride proposals from his colleagues which he considered "unworkable" and unrealistic in his circumstances, never mind that this may be an egotistic and parochial position.

Several Ivorians and West African citizens, including Ghanaians, have died and lost property in this imbroglio. ECOWAS leaders and governments could do little to stop further pogrom or talk down the parties who rather were granted VVIP treatment over the two years or so period.

It is again a shame and a disgrace to our 'Africanness' that it has to take the death of nine French soldiers to bring the Ivorian leadership including a sovereign President Laurent Gbagbo into submission.

The UN embargo imposed on Monday, November 15, was unanimously carried by the UN Security Council which called for an immediate arms embargo with a threat of sanctions 30 days later.

More than 4,500 foreigners have been evacuated, and it is distressing that the African leaders who proposed the sanctions could muster strength to make such a call only after Chirac and France had unequivocally laid down the line for the Ivorien government of Laurent Gbagbo and the rebel "New Forces" of the North.

The UN embargo is expected to ultimately impose sanctions on individuals in La Cote d'Ivoire standing in the way of the peace process. With over 4,000 French troops and 6,000 UN peacekeepers in tow, Cote d'Ivoire is still a fragile "state". Laurent Gbagbo as President is obviously caught as hostage by an intensely rabid military and youthful "patriots". The spectre of his being dislodged by his own, allegedly for not being radical enough could have led him to order or not to restrain the ill-advised aerial bombing which did maximum damage to the French troops and the consequent fallout.

France is in the eye of the storm and in a revenge retaliation bombed the two offending flying objects, which were used by the Ivorien army to snuff out the lives of the 9 French soldiers.

The world's geo-politics has changed and our Ghanaian diplomats and political leaders must break out of the old school. Serbia, Afghanistan, Iraq and other recent hot spots espouse a new doctrine in international relations. Africa and African leaders who prefer to fly to Brussels and the EU to witness the great economic and political détente must commit themselves to the greater interest of Africa beyond the rays of sharp-tongued Dr. Apraku and his elements.

With all the beautiful prose and agreements captured in the NEPAD and AU documents, Africa is still nowhere near real unity. Cross-country travelling remains hazardous and corruption-prone. Neighbouring countries remain alien and strange territories.

Inter West Africa/African movement is lower than some 50 years ago under the colonial masters when Gold Coasters moved freely and settled in Freetown, Lagos, Brazzaville, etc.

So-called petty sovereignty is killing our unity. A West African Court of Appeal, West African Airlines, etc and more are of archival stuff. Yet our leaders have to fly from one country to another to sign meaningless and unenforceable agreements and top it with some fine champagne amidst back-patting and occasionally some tidy bucks and guns to back our election, re-election and continued stay in office. What moral strength would such a leader have to subsequently criticise his benefactor and "guardian angel?

And so Laurent Gbagbo refused to abide by the Limas-Marcoussis and Accra III Accords. He simply had a dim view of President Kufuor's capacity as Chairman of ECOWAS to broker peace. Uncharacteristically, Minority Leader Alban Bagbin shot at the truth too much, too early and came under great flak, orchestrated and delivered by a powerful NPP propagandist media led by Kwabena "Squealer" Agyepong. In the end, the poor Honourable Minority Leader had to eat humble pie and regurgitate a token diplomatic apology.

As Thabo Mbeki of South Africa flew over Ghana into Cote d'Ivoire to calm nerves over and above the sub-region's capo, and as AU Chairman President Obasanjo of Nigeria convened summit meeting on the Ivorien crisis in Abuja to which ECOWAS Chairman J. A. Kufuor is summoned, it became clear that ECOWAS and its leadership had failed to deliver and has had to call on greater forces and authority - the AU and the UN.

But what do we expect, with the likes of our Honourable political dinosaur to our East with 38 years of isolationism and political exclusion as President Kufuor's mentor or "guardian angel", as he prefers to describe him, how can such a Chairman broker peace in Cote d'Ivoire?

How many of our leaders today are prepared to submit their hollow titles to the greater African good?

It is a shame that in the recent Ghanaian Presidential Candidates' Debate, disappointedly boycotted by incumbent President Kufuor, not a single question on Africa and African Unity was asked. We are still concerned with our little political corners.

As NPP eats NDC and vice versa, the bigger and real problem hides from the view of the ordinary Ghanaian - an Unjust International Economic Order, an Unequal International Political Order, and an Unfair International Information Order.

NDC Presidential candidate John Evans Atta-Mills came closest to this subject by referring to the harsh international economic order of 1999/2000. The NPP exploited those international difficulties, and they are now in power reaping the whirlwind, rolling and billowing as Ghana remains HIPC for the next 20 years. RIP Ghana?

Komenda Sugar factory to be operational in 2022 — Akufo-Addo...
9 minutes ago

MMDCEs confirmation: Henry Quartey is a master tactician, I ...
9 minutes ago