No #HealthForAll without peace: Attack on healthcare facilities is war crime, must stop 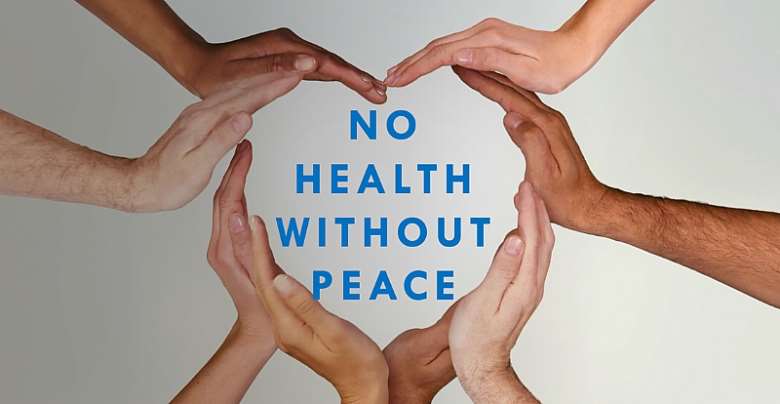 Slogans like 'every life matters' sound so clichéd and hollow when we see the ground reality in the ongoing Ukraine-Russia armed conflict: healthcare workers, healthcare facilities and transport are getting mercilessly attacked causing immediate and long-term damages as well as menacingly threatening the progress made on right to health in the past decades. Former Secretary General of the United Nations had condemned attacks on hospitals as war crimes.

In 2016, the United Nations Security Council had unanimously adopted resolution number 2286 strongly condemning attacks against medical facilities, transport, and personnel in conflict situations. Back then, governments had strongly condemned attacks and threats against the wounded and sick, medical personnel and humanitarian personnel exclusively engaged in medical duties, their means of transport and equipment, as well as hospitals and other medical facilities.

Dr Tedros Adhanom Ghebreyesus, Director General of the United Nations health agency, the World Health Organization (WHO), said last week: “So far, WHO has verified 18 attacks on health facilities, health workers and ambulances, including ten deaths and 16 injuries. These attacks deprive whole communities of healthcare. More than two million people have left Ukraine and WHO is supporting neighbouring countries to provide healthcare for refugees, most of whom are women and children. Some of the main health challenges we see are hypothermia and frostbite, respiratory diseases, lack of treatment for cardiovascular diseases and cancer, and mental health issues.”

Some healthcare facilities are being abandoned by the authorities because they simply cannot function in this crisis situation. In some situations, there are attempts to move hospital equipment and healthcare workers around. "This is becoming an extremely complex health response with frequent population movements, shifting lines of control, increasingly difficult access and very asymmetric type of warfare" said Dr Ryan.

WHO is continuously sending medical and health related supplies to Ukraine. "Sending supplies to hospitals is great but those hospitals need power, they need clean water, they need engineers to be able to help, they need fuel supply for generators. All of this infrastructure and engineering support is needed to keep your average hospital running in a normal situation. In the middle of a shooting war, it is almost impossible" shared Dr Ryan.

The WHO had recently raised an alarm about depleting oxygen stocks in Ukraine and the looming threat of oxygen crisis. “This oxygen shortage is not due to the corona virus but because of armed conflict - which is essentially preventable” said Shobha Shukla who leads CNS (Citizen News Service) and Asia Pacific Media Alliance for Health and Development.

There is no doubt that the only real and lasting solution to the ongoing Ukraine-Russia conflict is through peace. “WHO continues to call on the Russian Federation to commit to a peaceful resolution to this crisis and to allow safe, unimpeded access to humanitarian assistance for those in need. A peaceful resolution is possible and that is true in every war and humanitarian crisis to which WHO is responding around the world” added Dr Tedros.

In 2016, Peter Maurer, the President of Red Cross, had said that 2,400 targeted attacks had been carried out in the last three years against patients and healthcare workers, transport, and centres in 11 countries. The then-head of MSF (Doctors Without Borders or Medicins Sans Frontieres) Joanne Liu had said in 2016 that 300 air strikes on Aleppo, Syria occurred within 10 days. She added back then that in Afghanistan, Central African Republic, South Sudan, Syria, Ukraine and Yemen, hospitals were routinely bombed, raided, looted or burned to the ground, and medical personnel were threatened and patients were shot in their beds. While the United Nations Security Council was responsible for maintaining peace and security, four of its five permanent members had been associated with coalitions responsible for attacks on health structures over the last year, she noted.

How can we forget heart wrenching incidents when hospitals in Gaza were hit by Israeli strikes in which thousands of people had been killed, or when an MSF hospital in Afghanistan was attacked by the United States military forces?

Since the beginning of the Syrian conflict, Physicians for Human Rights had documented more than 360 attacks on around 250 medical facilities. More than 730 medical personnel were killed. Almost half of all medical facilities in Syria had closed then or were functioning only partially. A similar pattern of systematic destruction of health facilities was evident in Yemen. More than 600 medical facilities were shut because of damages sustained in the conflict and shortages of supplies and medical workers.

Until recently over three-quarters of the health facilities in Afghanistan had reported stock-outs of essential medicines and there was a looming threat to sustain the health workers in their posts.

In the Tigray region of Ethiopia even UN agencies, like the WHO, have not been permitted to deliver medical supplies since mid-July of 2021. This is despite repeated requests from the WHO to provide medical supplies to Tigray, to help meet at least some of the humanitarian and health needs of people living there. Even in the toughest periods of conflict in Syria, South Sudan, Yemen, and others, WHO and partners have had access to save lives. But Tigray is out of their reach, where the de facto blockade is preventing access to basic humanitarian supplies, which is killing people.

More importantly, let us remember that even before the COVID-19 pandemic, a very large proportion of the human population has been living in appallingly squalid conditions (in slums and otherwise) sans proper sanitation, sans potable water, sans access to basic healthcare. The vast range of inequalities and social injustices within nations, and between rich and poor nations, is well known and documented.

(Bobby Ramakant is part of CNS editorial team and was awarded the WHO Director General’s WNTD Award in 2008. Follow him on Twitter @BobbyRamakant)