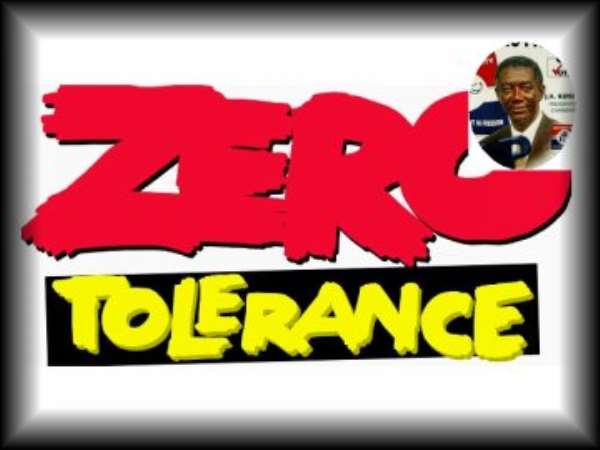 This year’s Corruption Perception Index released by Transparency International indicated that Ghana dropped to 72nd position, out of a list of 133 countries. Its score was 3.3 (same as 1999), and down from 3.4 in 2001 and 3.9 in 2002. This news may have shocked many, taking into account the fact that the Kuffour administration came to power principally on the electoral platform of zero-tolerance for corruption. Having thus performed poorly, one would have expected the government to admit, at least, that it was failing in the fight against corruption and promise to reinvent itself and do something about it. But for the President to say that “show me the corruption and I will deal with,” and for the Attorney-General to follow in the heels of his boss and say it is just a perception so its fine is really bad news for the government. Let’s recall that quite recently at the UN, South African President Mbeki made a similar remark during an interview with a New York newspaper. The Honourable South African President said that he did not know anybody who had died of AIDS in South Africa and that they should show him one. This kind of condescension by African leaders is pitiful. The fact is that corruption is a fact of political life. It is pervasive even among the so-called advanced democracies. Let us not forget the financial scandal that rocked the European Union a few years back and repeated itself this year in Euro-Stat, the statistics division of the European Union. Let us not overlook the corruption scam that has shaken Italian politics and which has even extended its long smearing arm against the current European Commission President, Romano Prodi, former Italian Premier. There is more and more. The so-called “good governance” with its accompanying mantra (transparency and accountability) has not proven effective in dealing with corruption. The reasons are varied and complicated. But an obvious one is that the good governance concept is skewed in favour of promoting the interests of Western states and corporations, to facilitate repatriation of profits and security of their investment. The rest is secondary. If there is a knock-on effect, well and good. But that is not to excuse the NPP government for its dismal and appalling performance on the CPI scale. We do not have to wait for external forces to tell us what to do and how to do it in order to make it. If the government will be honest with itself, it should tell the people of Ghana what steps it has taken on its own, apart from the World Bank and IMF policies and other prescriptions by donor states, what unique steps it has taken to tackle corruption. It should tell the people of Ghana what effort it has made to cut down on unnecessary expenditure, institute some financial discipline on its own, and reduce the over-reliance on foreign aid to top up our budget. This is where the issue of perception comes in. Much as the Transparency International process is not without its imperfections, it is time the government realised that perception about corruption is truly the scientific measurement for exposing sleaze. So the asinine brushing-off attitude displayed by the Attorney-General in reaction to Ghana’s corruption record is very unfortunate indeed. Mr. Attorney-General should be reminded that in law bias is not only what is actually bias but what is perceived to be bias is taken into account in measuring bias. So perception is very crucial. And in my opinion, the perception of the people about corruption actually relates to what may seem legal and legitimate but in actual fact contributes towards entrenchment of poverty, the production of poverty and the widening of the gap between the have and have-nots. Let us take the example of the frequent flyer status of the President. His globetrotting adventurism has done no good to whip up investment interest in the country. Rather, investment is down by 70% since 2000. Did not somebody tell him that we have to put our house in order first and then the investors will come by themselves? Meanwhile, he is collecting a hefty sum of $1,000 a day as per diem. This amount can be used to pay the monthly salary of at least 30 minimum-paid workers. What if the President decided to limit his foreign trips and also say that for every trip, “I will take just $100.” What a huge impact and change in perception about corruption that this gesture will give! What if the President decided to cut down on his long list of friends, family members and relatives who are on the pay list of the government? It may be that indeed, the President’s coterie is made up of people who possess the calibre of doing those jobs assigned them. But people will certainly have the perception that there is bias, nepotism and cronyism. What if the President will dismiss the so-called Special Assistants to the Ministries? Will not that remove part of the perception of corruption and favouritism? If Parliamentarians are given $20,000 loans each to buy a car and statistics indicate that there is no way they are going to be able to pay back, even if one factors in some financial scandals they would dabble in, would not the people perceive corruption? And they are given some fat rent allowances to boot. What if the President, after all the hullabaloo about declaring his asset on the assumption of office, had actually made the declaration public, like President Mbaki of Kenya did? What if the government comes clean on the World Bank loan that was awarded to the Akim and Ashanti traditional areas and admit there was a bias here for the Akans?

The list can go on and on. And so the government should not feel that perception is not important. Perception is what at the end of the day translates into reality. And the reality is that corruption is rife in the country. So Mr. President, do something about it. Kwadwo Appiagyei-Atua Irish Centre for Human Rights Galway, Ireland Views expressed by the author(s) do not necessarily reflect those of GhanaHomePage.