NDC will protect your votes in 2024 – Joshua Alabi 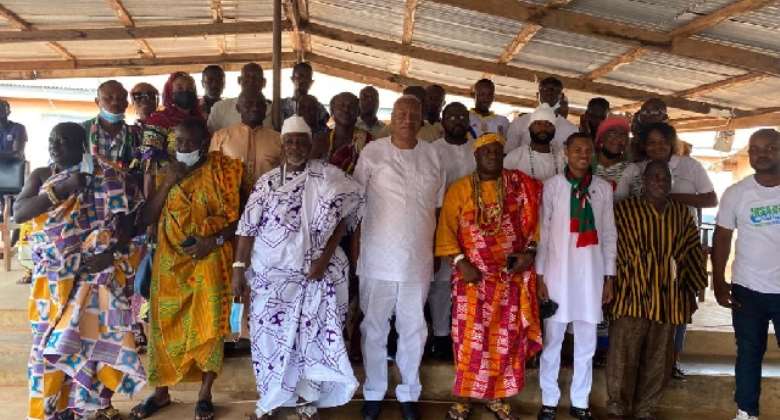 The Campaign Manager for the 2020 general elections of the National Democratic Congress (NDC), Prof. Joshua Alabi, has stated that the party will do all that is legitimate to protect the votes of Ghanaians in the next general elections slated for December 2024 at every polling station.

He said the party will not permit any form of rigging from anyone.

This, according to him, is what the 2020 flagbearer of the party, Mr John Mahama, meant when he said the 2024 polls will be a “do or die” affair.

Prof Alabi was speaking at a meeting with Ga chiefs in the Madina/Abokobi area at the palace of the Teiman chief.

He was there to thank them on behalf of former President Mahama who, before the 2020 presidential and parliamentary elections, sought their blessing for victory.

Prof Alabi said Mr Mahama saw it proper to call on them again to thank them especially, as the NDC won the Madina parliamentary election while Mr Mahama polled more votes than his closest competitor in that constituency.

Prof Alabi is confident that former President Mahama will lead the NDC in the 2024 general elections and will be counting on their prayers and support even more than before.

According to the former Vice-Chancellor of the University of Professional Studies, Accra (UPSA), the vast majority of Ghanaians believe the integrity of the last elections were compromised.

But for that, he said Mr Mahama would have been president again with 145 NDC MPs.

This, he said, cannot and will not be tolerated in the 2024 general elections.

Nii Teiman was grateful to former President Mahama for showing gratitude to them and wished him well.

Prof Alabi was accompanied by the MP for the Madina Constituency, Mr Francis-Xavier Sosu and the party’s Constituency Chairman and other executives.

Latest Photo Reports
Catch up with all the political quotes from our politicians.
Advertise here
More NDC News
ModernGhana Links
Don’t compare E-block to our infrastructural development – NDC advised
Teachers are now under threat in Ghana – NDC’s Osei Akoto
E-levy: 'Shut-up and learn from us" — Musah Superior blasts NDC
Youth must be desperate to retire failed Akufo-Addo — NDC's Julian Cobinnah to Ghanaians
We know your phony deals when you were Mayor; be wary of your utterances – Baba Jamal cautions Kojo Bonsu
2024: Mahama's name is too 'soiled' with 'corruption', 'women affairs'; floating voters will reject him, I'm the man – Kojo Bonsu
NDC flagbearer race: Mahama is a great gentleman but I will still contest him – Kojo Bonsu
Former TTAG National Treasurer eyes NDC deputy communications position in Sagnerigu
If E-levy has been passed then implement it – NDC MP to Kyei-Mensah-Bonsu
TOP STORIES