N/R: A revolution needed to regain its enviable position as world bank of NDC — Hardi Pagazaa 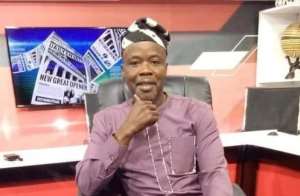 Deputy Communications Officer of the opposition National Democratic Congress (NDC) for Northern Region, Mr. Hardi Pagazaa, has said a revolution is needed in the Northern Region to regain its enviable position as world bank of the NDC.

He added that he is worried the party will win the 2024 election without Northern Region as its world bank as it used to be.

"A revolution is needed in the Northern Region to regain our enviable position as world bank of the NDC, both physical and mental revolution is urgently needed now.

"My deepest worry, however, is that the great NDC and John Mahama shall win the 2024 election without Northern Region as a world bank if things remain same", he bemoans.

He also waded into the comments made by President Akufo-Addo and Lord Commey in two separate videos that the current NPP government will hand over to an NPP government after the 2024 election.

"I am not worried. The statement made by Nana Addo and the speech by Lord Commey have no bearing on the outcome of the 2024 do or die election. HE John Mahama and the NDC shall win the election and power handed over to us with no difficulty," he stated.

According to him, the desire by Nana Addo to hand over to an NPP government is a ploy to cover alleged corrupt officials in the current government.

He alleged that President Akufo-Addo would resign in 2023 for his Vice to be sworn in as President.

"In his desire to cover corrupt officials in the current government, and to further ensure the dominance of the 'Akyem Sakawa boys' in the financial sector, Nana Addo will step down in early 2023 before the NPP National Congress. Dr. Bawumia would then be sworn in as President with Alan Cash, Dr. Mathew Opoku Prempeh or Dr. Osei Akoto as Veep," he stated.

He continued, "this they think would give the NPP an opportunity to win the election with the subtle support of Jean Mensa and Dr. Bossman's EC. Little did they know that John Mahama lost the 2016 election as a sitting President and same will happen in 2024."