A Salute To President Kufuor on African Union Day 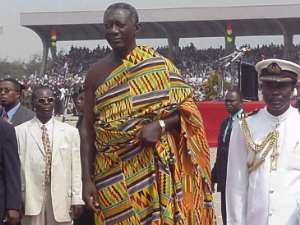 In his address to the assemblage at the All African Peoples Conference in Accra, December 1958, W.E.B. Du Bois said the following: “If Africa unites, it will be because each part, each nation, each tribe gives up a part of the heritage for the good of the whole. That is what union means, that is what Pan-African means.” In accord with the foregoing perspective of the father of Pan-Africanism, President Kuffour must be highly commended for declaring May 25 an African Union holiday in Ghana. This, in effect, affirms Ghana’s pioneering role in the formation of the Organization of African Unity. Until the overthrow of Nkrumah’s government by the traitors on February 24, 1966, (John Stockwell’s In Search of Enemies: A CIA Story) Ghana was not only the vanguard of continental African unity, but was also the shining star of the entire Black race. Perhaps, a brief summary on how Nkrumah spearheaded the cause of the African Union will dismiss as senseless, the criticisms mounted against this authentic African holiday.

In 1945, Du Bois invited Nkrumah to the membership of the international committee, which drew up the four resolutions on the colonial question for the United Nations; these resolutions became part of the UN’s Charter on the Declaration of Human Rights. Also Kwame Nkrumah and Du Bois authored the two declarations at the fifth Pan-African Congress in Manchester, 1945. These declarations provided the ideological framework and plan of action for the decolonization of the entire African continent. Hence, on the eve of Ghana’s political independence on March 6, 1957, Nkrumah enshrined the Pan-African project with a political will stating that, “the independence of Ghana is meaningless unless it is linked up with the total liberation of Africa.” And indeed, Ghana provided logistical support, financial, material and human resources (including civil service personnel and teachers) to some of the newly independent African states and the liberation movements, from Algeria to South Africa. As the internationally renowned African prolific novelist and political activist Ngugi wa Thiong’o noted, Ghana, between 1958 and 1966 (February 23), became the “Mecca” of Africa for all African people.

To match words with action, Nkrumah summoned the then seven independent African heads of state to a historic meeting that took place in Accra between April 15 and 22, 1958. In addition to resolutions on political, economic and culture, Nkrumah urged the African leaders “to assert our own African personality and to develop according to our own ways of life, our own customs, traditions and cultures.” Kwabena Onyina, for instance, composed a song in commemoration of this historic meeting. In December 1958, an All-African Peoples Conference was also held in Ghana. Diasporan Africans and the would-be leaders of the liberation movements within the continent attended this conference. Then, a series of meetings which took place between 1959 and 1963, amidst ideological differences, eventually culminated in the birth of the Organization of African Unity. Ghana, as the mother of the African Union is unquestionable. Jomo Kenyatta acknowledged this at a public meeting in London, 1959, when he stated that the independence of Ghana marked the end of the European domination of Africa. Certainly, Ghana paved the way for closer relations and cooperation among African nations as well as Africans in the diaspora. And one of the many manifestations of the OAU is today’s African football competition, for which Ghana spearheaded.

In fact, history is replete with leadership roles that Ghanaians have played toward the course of African unity. They include J. E. Casley Hayford and Kobina Sekyi (both of the National Congress of British West Africa), Seth D. Cudjoe, J. C de Graft Johnson, and J. B. Danquah. The rest are Joe Appiah, G. Ashie-Nikoi, Kojo Botsio, Kankam Buadu, Kurankyi Taylor, J. S. Annan, Ako Adjei, Kwame Nkrumah and many others. Even today, wherever there is an African social, cultural or students’ organization in the US, Ghanaians always find themselves in leadership positions. I recall in 1977, when some African residents in New Haven, Connecticut (including some university professors) pleaded with some of us Ghanaians to accept the leadership role of a newly formed African organization.

It is against this backdrop that I question the rationale of the critics of President Kuffour’s historic declaration marking 25th May an African Union holiday in Ghana. Surprisingly, the critics of the holiday closed their eyes to the May Day holiday; and the irony is that the commemoration as regards the hanging of four of the falsely accused overworked industrial workers in the 1886 Chicago's Haymarket incident is not even celebrated by the labor unions in the US. Second, the critics did not use the same argument against the many non-African religious holidays in Ghana.

The arguments advanced by the opponents of the president’s declaration that it impedes productivity and economic activities of the country are inconclusive. In my view, the holidays that have had substantial adverse impact on the economy and productivity, which eluded the critics, is the observance of sacred days of foreign religions in the country. The first of these are Easter holidays which occur on Good Friday and the picnic, the following Monday. This does not take into account the waste of working hours on the travels on the Thursday preceding the Good Friday and Tuesdays after the so-called picnic. Though they are not statutory holidays, public offices and work places (with a few exceptions) on the Thursday and Tuesday just cited, are partially empty of workers.

Perhaps, the most devastating of all the non-African religious holidays in terms of the economy and productivity is the Christian sacred rituals on December 25 and 26 commemorating the birth of Jesus (Greek word for Hebrew Joshua) on December 25. Furthermore, December 24 has become an occasion for different governmental departments and public corporations/institutions to hold Christmas parties. Between December 27 and 31, one would again find some offices and work places of public institutions with partial ghost workers; and, woe unto any person who travels to Ghana to transact some important business or conduct research that week. Next are the two new statutory holidays for observing Islamic sacred rites. The question is, don’t these non-African religious holidays have the greatest adverse effects on Ghana’s economy and productivity as compared to the African Union holiday?

It would have made sense had the critics suggested a reduction in the number of holidays set aside for the rituals of these two foreign religions. For instance, Boxing Day on December 26 in Britain is for the opening of boxes containing gifts for loved ones and friends; whereas in the US, the boxes are opened on the morning of December 25. The next day, December 26, people are back to work in full force and on time. Easter, for instance, is not a statutory national holiday in the US. I know some leading divinity schools in the US, where classes are held on Good Fridays; and, Rev. Dr. Brew Riverson and Rev. Dr. Asante Antwi can bear me out.

The following are my recommendations: First, in addition to discouraging Christmas parties on December 24 at all public facilities by public employees during working hours, the national observance of the Christian rituals should be limited to the Good Friday and the Christmas day, December 25. Second, believers in African religions and their saviors/saints like Okomfo Anokye, Kofi Gyeprem of Akyem Tafo, Krakye Dente of Kete-Krakye and many others should also be given a holiday in the year to observe their sacred days.

My other suggestion to President Kuffour’s government and the parliament is to annul their aggressive obsession about the study of European languages in the public schools, and consider setting up a national commission to develop an African-centered curriculum on African history and culture, from the Nile Valley civilizations to the present. The commission should take into account J. E. Casely-Hayford’s vision of an African university on the African soil. If considered, I would add that the study of African history and culture (including the languages) should be made mandatory for all students from kindergarten to the university. This is because culture is the keystone of socio-economic transformation. Otherwise, the African Union holiday on May 25 would become a cosmetic proclamation. I salute President Kuffour for his historic declaration! Views expressed by the author do not necessarily reflect those of Ghanaweb. Address of the author: 507 W. Manheim St. Bldg. 11A Philadelphia, PA 19144

People who collapsed GN Bank three years ago had ‘Kerosene’ ...
33 minutes ago