The Self-Styled “Homeland Study Group Foundation” in the Volta Region 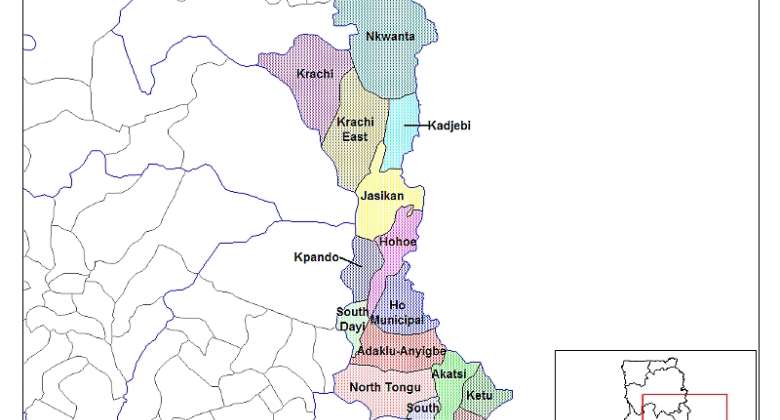 To H.E. John Dramani Mahama and All Patriotic Ghanaians

Introduction.
The sudden reemergence of the self-styled “Homeland Study Group Foundation” ( HSGF) in the Volta Region, threatens the security of Ghana and that of the West African sub-region. Its claim of “homeland” is unfounded, and its demand for a semi-autonomous region for a so-called “Western Togoland” is bogus; and, thus violates the constitution of Ghana between 1957 and 1992. Their perceived “homeland” was the western part of the former German colony, which was placed under the British colonial administration by the League of Nation in 1922, and the UN Trusteeship Council in 1945. The western part of the UN Trust territory included: (1) the northern Ewes in the Volta Region (Ho-Hohoe-Kpandu environs), (2) Jasikan-Worawora-Buem-Kete-Krakyi environs, (3) the eastern part of Northern Region (east Gonja-Salaga area, Dagbon kingdom of Yendi), and (4) the eastern part of Upper East Region (Mamprusi and Kussasi district, Pusiga/Nalerigu-Bawku-Bimbila-Gambaga). The key question is, who appointed the HSGF in the southern part of the Volta Region to speak for the Akans and Guans in the northern part of Volta Region, as well as the people in the eastern parts of the Northern and Upper East Regions? A closer look at their ridiculous demand and the ethnic makeup of their leaders clearly tie them to the activities and objectives of the “All Ewe Conference” and its offspring “Togoland Congress” (the thesis of my 1977 MA degree in history). But what makes the HSGF a toxin in our midst is its deliberately concocted interpretation of the terms of the 1956 UN Plebiscite, during which the majority of the citizens in the UN Trust territory (under the British colonial administration) freely voted for integration with the Gold Coast. The ludicrous demand of the HSGF therefore violates Article 4 (1) of the 1992 constitution. As well, its false claims and demands are typical of all terrorist groups across the world. Hence, it must be outlawed, and its leaders apprehended and tried in accordance with the laws of the land.

Mischaracterization of British Togoland as “Homeland” and “Western Togoland.”

First, to refer to the western portion of the former German Togoland, which was placed under the British colonial administration after the First and Second World wars, as “homeland” is incomprehensible. Prior to Germany’s arbitrary demarcation and colonization of a territory it called “Togoland” in 1884, there was no kingdom or territory called “Western Togoland.” No ethnic loyalty on a larger scale was realized throughout Germany’s occupation. When Britain therefore took over in 1922, there were no remains of large Ewe states as was the case of the Akans or Ga-Adangme on which to build. The western portion of the UN Trust territory was, therefore, not a homeland to any particular kingdom (Kwame Botwe-Asamoah, 1977 MA Thesis; F. M. Bourret).

Secondly, “homeland” refers to an unlawful occupation or annexation of a kingdom or country by a powerful external force denying the birth rights of the natives, including the right to self-determination, freedom of expression or speech, freedom of association and freedom to choose their leaders. Fact is, it was the Germans, who in July 1884 unlawfully announced protectorate over 21, 260 sq. miles of land and named it Togoland (UN Trusteeship Council Document T/pet). So to refer to the western portion of the former German Togoland (now forming part of the Eastern, Volta, Northern and Upper East Regions of Ghana) as “Western Togoland” and “homeland” by the so-called “Homeland Study Group Foundation,” is out of sync with the political history of the territory.

In the accounts of F.M. Bourret, the Ewes had acknowledged British protection, even before the German occupation. During its colonization of Togoland, the German atrocities led to the adage that “Death is better than a German prison” (Katharine Skinner). That notwithstanding, the whole Eweland on both sides of today’s Ghana and Togo came under British control throughout the First World War. In 1922, the Mandated Commission received reports indicating that the inhabitants in the Eweland “appeared more satisfied to return to British rule” (Bourret). It meant that if the League of Nations were to consider the consensus among the Ewes, their land, property and family ties would have remained undisturbed. In other words, all the Ewes would have come under the British colonial administration (Kwame Nkrumah). Had that become a reality, would the HSGF be referring to their invented “Western Togoland” as their “Homeland,” and making an outrageous demand for a semi-autonomous region? What about the desires of the Akans and Guans in the northern part of the Volta Region, as well as the ethic groups in the eastern sections of the Northern and Upper East Regions?

Here, it is important to elucidate that the southern and some parts of the Eweland, including Anlo, Tongu, Peki and Awudome and their environs were organic part of the Gold Coast Colony by 1850; this was before “Asante [including the Bono kingdom] and the Northern Territories were annexed to the British crown under the Governor of the Gold Coast” on Sept. 26, 1900, effective January 1, 1902 (Daniel M. McFarland and David Owusu-Ansah). As well, the Eweland in the British colony was slightly larger than that of the British Togoland in the north. So why include the former in the fictitious “homeland” of the so-called “Western-Togoland” in the outrageous demand? How and when did they (Anlo, Tongu, Peki and Awudome) become part of the German colony?

Brief History of British Togoland from Mandate to Trustee.

As indicated above, between 1914 and 1920, the greater half of German Togoland, including Lome and its hinterland were controlled by Britain (UN Trusteeship Document T/pet. 6/5-T/pet. 7/6 1947). Practically, this meant that all the people of Eweland came under one administration, namely the British colonial government

But during the Paris Conference of 1922, the Supreme Council of the League of Nations mandated the Western portion of the German colony, an area of about 13,000 square miles to Britain. Subsequently, in 1924, a royal order-in-council made specific provision for the government of the mandate. Under that provision, British Togoland was divided into two sections, and placed under the jurisdiction of the Governor of the Gold Coast in accordance with section 9 of the mandate treaty. It says: “this area shall be administered in accordance with the laws of the mandate as part of” the Gold Coast Colony. “The mandatory shall therefore be at liberty to apply her laws to the territory subject to the mandate with such modification as may be required by local conditions” (Bourret). The ordinance of 1924 thus made it possible for Northern Eweland to be united with the Eastern Province of the Gold Coast.

Five districts were created in the whole territory, one in Ho and the remaining four in the northern section of the mandate. The commissioner for Ho district, an area of about 2,607 square miles, had its own court with jurisdiction up to £100 fines for both civil and criminal matters. Any case beyond this legal limits, had to be passed on to the Gold Coast courts in Accra or Koforidua (Botwe-Asamoah; Bourret).

Though the Ewes (like all colonized people) demanded the removal of the arbitrary international frontiers that had deprived them of their kinship bonds and allegiance to their kings/queens, their right to visit their families, and their right to cultivate their farms on both sides of the UN Trust territory, the Gold Coast colonial administration continued to administer the western part of the UN Trust territory till the 1956 Plebiscite.

The United Nations Plebiscite of 1956.
The UN Plebiscite was based on a recommendation by 1954 UN Trusteeship Visiting Team that a plebiscite be held in the British Togoland for the people to decide whether they wanted (1) a union with the Gold Coast at the time of its independence or (2) a continuation of the Trusteeship under British administration as a separate entity from Gold Coast, pending the ultimate determination of its political future (Kwame Nkrumah).

Two main political organizations campaigned for and against the union with the Gold Coast. While branches of the CPP in the Trust territory, especially in the north, stood for the union, the Togoland Congress (an offspring of the All-Ewe Conference) opposed it. The British Togoland, as earlier pointed out, stretched from the northern Ewe territory (Ho-Hohoe-Kpandu environs through Jasikan-Worawora, Buem-Krakyi, eastern part of Northern Region (East Gonja, Yendi/Dagbon kingdom) to the eastern part of Upper East Region (Mamprusi and Kussasi). The Ewes constituted 1/3 of the population in the UN Trust territory (Botwe-Asamoah; UN Trusteeship Council Document T/pet).

The UN Plebiscite Commissioner, Senor Eduardo Espinzosa y Priesto and Plebiscite Administrator, Sir John Dring, assisted by a team of United Nations observers, supervised the plebiscite on May 9, 1956 (Nkrumah). The people in the British Togoland voted in favor of the unification with the Gold Coast colony by overwhelming margins. The greater part of the Ewes in the southern part of the Trust territory, led by S.G. Antor of the Togoland Congress, voted against the union.

From the Union with the Gold Coast to Ghana’s Independence

So why after Ghana’s independence in 1957, would this self-styled “Homeland Study Group Foundation” come out again in this election year to demand a semi-autonomous region for “Western Togoland,” which never existed? More to the point, there has never been a sovereignty called “Western Togoland” in Africa. There is thus no legal basis for referring to the former British Togoland as “Western Togoland.” On hindsight, it is an insult to the dignity of all people who lived and hail from the western part of the UN Trust Territory that they once “had a country of themselves before” Britain made it a part of the Gold Coast (ghanaweb.com, 11 Feb. 2016). What an insult!

Likewise, the HSGF’s claims that there were some “conditions agreed for the union at independence” (ghanaweb.com, 11 Feb. 2016), which had been betrayed is absolutely fallacious. This is the kind of claims terrorists groups often use to incite the vulnerable youth in societies to cause mayhem. For instance. the Togoland Congress, which joined forces with the NLM and NPP (Northern People’s Party) to counter the CPP Unitary campaign in the 1956 general election, resorted to terroristic act after Nkrumah’s CPP won the election. On the eve of Ghana’s independence on March 6, 1957, remnants of the Togoland Congress, led by S.G. Antor (Danquah’s buddy and Busia’s ally), formed themselves into a ragged guerilla army in Alavanyo and prepared for an armed insurrection with homemade guns against the CPP government. The Governor-General sent troops to the region to put down the revolt (Kofi Awoonor). For their part, the NLM and NPP, on November 20, 1956, sent a resolution to the Secretary for Colonies in London, demanding a separate independent state for Asante and the Northern Territories, since they were not part of the Gold Coast Colony (McFarland and Owusu-Ansah).

The CPP government of Ghana at the time of independence, inherited the territorial frontier called Gold Coast, including the British Togoland, from the British Crown on March 6, 1957. It is therefore illogical for the latent terrorist “Homeland Study Group Foundation” to address their unfounded claims and demand to President John Dramani Mahama. They can take their unfounded claims, if they think they have a case, to the United Nations.

Meanwhile, given the proliferation and influx of weapons into the country, as well as the on-going political tension during this 2016 election year, the government of Ghana must waste no time in dealing with the group as a covert home-grown terrorists, under the 1992 constitution.

Conclusion.
Since independence, Ghana remains one of the few lucky African countries that has not been visited by civil war, violent (political) dissention and terrorism. The saying is that “big things have small beginnings.” For this reason, all political parties, religious bodies, National House of Chiefs, National Peace Council and other civil societies must rally behind the Ghana Government, represented by the National Security Council and Attorney General and Minister of Justice, to flush out this dangerous group from Ghana and the West African sub-region.

Attention:
His Excellency John Dramani Mahama, President of the Republic of Ghana