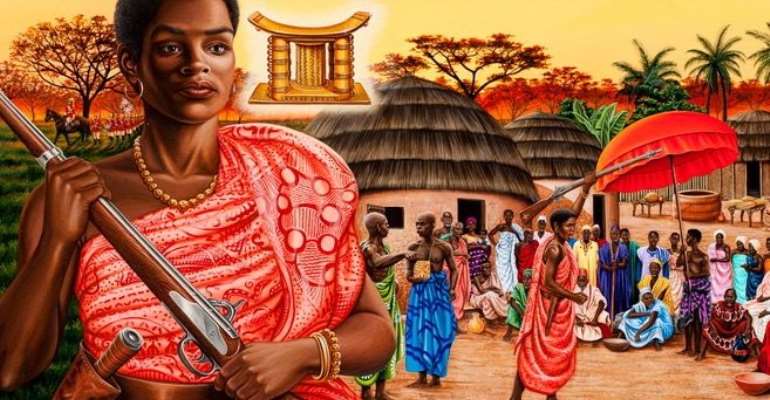 In 1896, the very year in which my maternal grandfather, The Rev. T H (Yawbe) Sintim-Aboagye, better known as The Rev. T H Sintim, of Akyem-Begoro, Asiakwa, Old Juaben and Asante-Mampong was born, The Asantehene, Otumfuo Osei-Agyeman-Prempeh, I, aka Kwaku Duah – I stand to be corrected on the latter count – was exiled by the British imperialist invaders, first, to the then British West -African Colony of Sierra Leon and then, finally, to The Seychelles, a chain of Islands in the so-called Indian Ocean, near South Africa; Edwesohemaa/Ejisuhemaa Obaapanyin Nana Yaa Asantewaa would shortly become a member of the Ghanaian exile community of the Seychelles.

At any rate, what is most significant to observe here and that which the anonymous Ghanaweb.com reporter of the news article captioned “Yaa Asantewaa Was Gyaasehemaa of Besease, not Ejisu Queemother – Historian” (Ghanaweb.com 9/19/21) glaringly omitted in his report, is the stark and incontrovertible fact that Obaahemaa Nana Yaa Asantewaa is globally recognized by scholars of Modern African History as a brave war shero. Yes, “Shero” is the correct descriptive and not the traditional “Heroine,” which actually means “A Little Hero,” as a personage who singularly and/or uniquely wrote herself by her rarefied valor into the Resistance History of the European Conquest of the Asante Kingdom or Empire, by dint of her sheroism and sheroic achievements as the Greatest of the Asante Queenmothers and, to be certain, The Greatest of All Asante Warriors, both men and women, at the turn of the Twentieth Century.

Now, we may quibble over the fact of whether, indeed, Osagyefo Nana Yaa Asantewaa was only a Gyaasehemaa or a marginal subchief or queenmother of Edweso-Besease and not Edweso Proper; or the verifiable historical fact of whether, indeed, she was even an Edweso-Besease native at all. Very likely, contrary to what Prof. Baffuor Agyeman-Duah would have his audience believe, Nanahemaa Yaa Asantewaa, who has been recently confirmed to have been the sister of The Okyenhene or The King of Present-Day Akyem-Abuakwa (See Yaw Afreh’s “Nana Yaa Asantewaa Was Edwesohemaa, and Not ‘Gyasehemaa of Besease’” Modernghana.com 9/20/21), from Adanse/Adansi Akrofrom and Kokobiante, was not a native of Edweso-Besease at all but as authoritatively noted by Mr. Yaw Afreh, a member of the Royal Society of Asante Culture and History (ROSACH), a bona fide descendant of the Pre-Akyem Kingdom of Adanse, depending on the narrator of this period and version of Asante History.

We are also well aware of the fact that ever since the “Akyem Identity” of Edwesohemaa Yaa Asantewaa became common knowledge, spirited and jaundiced and inexcusably mendacious attempts have been made by some Asante intellectuals, not necessarily scholars, to diminish the historically prominent and indispensable significance of this most famous and illustrious of Asante Women Leaders and Heroes or Sheroes, in suave and subtle hopes thereby of making this most remarkable “leaderess” assume the marginal status of a very ordinary and pedestrian figure. This latter-day “Asante Project,” unfortunately, comes rather too late in the canonical narrative of Asante History to register any momentous impact or dent. You see, Nana Yaa Asantewaa is no making of either clinically prejudicial European historians and/or determined detractors of Asante Supremacy, Might or Dignity. Like the proverbial Phoenix of Greco-Roman Mythology and classical European literature, Osagyefo Yaa Asantewaa is largely and primarily an iconic and mythical figure of her own making or autogenerated.

Furthermore, as the purported Gyaasehemaa of Edweso-Besease, the claim that has been attributed to Prof. Baffuor Agyeman-Duah, which would make the protagonist of this column a very marginal leader and personage in Asante History, in the very conspicuous absence of the Edwesohene, Osagyefo Yaa Asantewaa could not have cavalierly shown up at a conference of Otumfuo’s War Council. You see, in 1901, there was absolutely no Otumfuo Osei Agyeman-Prempeh, I, on the legendary Golden Stool, to begin with. We are not even certain of the fact of whether the original Komfo Anokye-commandeered Golden Stool from the late 17th Century is that which exists today, although we are officially informed by some historical accounts that the original Golden Stool may very well have been seized and shipped off to England by that ragamuffin lieutenant of the British Army who burned down Kumasi and ransacked The Asantehene’s Palace at the time.

Other accounts also claim that it was only a hastily minted replica of the Golden Stool that was presented to the “Mecca-bathed” British lieutenant who forced King Prempeh, at gunpoint, to lip-kiss his indescribably fetid boots. The picture of this most traumatic event was once published in the New York Times’ Book Review. The “Money-Stool Friday” may very well have been squirreled for successful safekeeping by my Barekese relatives and ancestors. We simply cannot confirm the truth or veracity of this version of the various accounts. But even more significant to note here, there is absolutely nothing “Afrocentric” about this devious and mischievous attempt to falsify the globally renowned and celebrated Yaa Asantewaa Story. As well, not even Prof. Albert Adu-Boahen, the most authoritative and foremost postcolonial Asante historian and scholar of his generation – and you can bet your proverbial bottom-dollar that Prof. Adu-Boahen was as “Afrocentric” as they come – would have left out this most significant narrative of Osagyefo Yaa Asantewaa’s biography from his considerable corpus of “Asantecentric” writings if the same were pregnant with any verifiable factual reality.

Which ought to make those of us avid students of Akan and Asante history take Prof. Agyeman-Duah’s version of the Yaa Asantewaa Story with a grain of salt. Indeed, not very long ago, a videotape was widely reported to have been making the rounds on which the current Asantehene, Otumfuo Osei-Tutu, II, was reported to have warned some Edweso royals to stop peddling a version of the history of the Edweso Royal Family that had some descendants of Osagyefo Yaa Asantewaa tracing the moorings or ancestry of the Edwesohemaa to present-day Akyem-Abuakwa, or Otumfuo Osei-Tutu would be left with absolutely no alternative but to turn over the Edweso Stool to the Asona Clan of Akyem-Abuakwa.