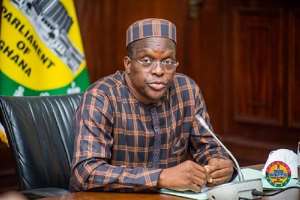 It was published in the media that Parliament under your watch approved a 13.3 million US Dollar tax waiver in favour of all MPs and Council of State Members to import cars for their personal use. In the case of the MPs, they are going to enjoy a 13.1 million dollar tax waiver on cars they will import in addition to Government paying on behalf of the MPs, 60% of the car loan being facilitated for them at the National Investment Bank with the accrued interest.

Mr. Speaker, a new Parliament comes into existence every four years. For how long are we going to go through this cycle and expect that the country should develop? Don’t you think arrangements of this sort will continue to fertilize corruption among the neglected populace? Akans say Adidi gya eyε ya (it hurts when others enjoy something good and neglect you), that is if I get the expression correctly. It is the favorite adage of two of my friends, Vivian Adobea Obeng of Ada East District Hospital and Princess Yvonne Awuah of Achimota Hospital.

Mr. Speaker, what creates more room for raised eyebrows under the circumstance is the fact that the MPs approved these packages for themselves at the time that the Public Servants including public sector health workers were given only 4% salary increment. To Government, this 4% salary increment for public servants may amount to huge sums of money spent but to the individual public servant, the benefit is insignificant- a drop of kerosene in the ocean.

Mr. Speaker, the 1992 Constitution makes the MPs the representatives of the people but I do not think that a representative must be enjoying more than the people he or she represents. Despite the fact that most of the citizens filed their displeasure against the proposed package for the MPs, Parliament went ahead and approved it.

Mr. Speaker, I recall vividly that once upon a time, you were Ghana’s Health Minister. You would, therefore, recall that health workers used to enjoy tax waiver on personal car importations. Sadly, Government cancelled that package for health workers on grounds that there was no money to continue granting the tax waivers. The health workers were equally accused for selling the cars they imported under the tax waiver arrangement.

Mr. Speaker, it is obvious that Government now has the money to pay 60% of the car loans on behalf of the 275 MPs and grant them tax waiver for them to import the vehicles. As such, it is just fair to restore the same tax waiver for our health workers who work for 24 hours to save the lives of the people of Ghana including the MPs, their constituents and relatives.

Mr. Speaker, in the case of the poor health workers, they did not and they will not benefit from any governmental part payment of car loans. They only need the tax waiver to import the cars themselves with their personally procured loans.

If the accusation that the health workers were selling such vehicles still holds, then I respectfully submit that we are currently in a digital age so such alleged sale of the vehicles by health workers can be tracked and prevented.

Since the inception of the COVID-19 pandemic, the health workers have been working tirelessly in saving lives and in most cases with inadequate healthcare commodities. It is, therefore, sad that the MPs who are already catered for in many ways still enjoy tax waivers to the neglect of the health workers.

There are times that some health workers on afternoon duty close at night and in their bid to go look for a commercial vehicle to go home, their personal effects such as handbags, mobile phones and other valuables are snatched from them by thieves. Should the Government make it possible for the health workers to acquire their personal means of transport, they will not be going through these life-threatening challenges. Quality healthcare delivery thrives on a motivated workforce and other factors.

To this end, Mr. Speaker, I beseech you to equally push for the restoration of the tax waiver for health workers to import vehicles for their personal use. Should this be done, all health workers should benefit from the package. The usual discrimination among them just as we saw in the case of payment of allowances to frontline ones at the onset of the pandemic should be eschewed. Healthcare delivery is teamwork and it takes the whole team to make the patient happy so no one-health professional should be made to feel more important than the others.

Mr. Speaker, you may agree with me that Ghana has been running an elite-centred democracy under the 1992 Constitution and this is dangerous for peace and stability. I say so because, making the elites enjoy the better and bigger portion of the national cake to the near total neglect of the masses can lead to government incurring their wrath through demonstrations and other forms of protests. The weak has been compelled to carry the strong for far too long and the poor has been made to feed the rich perpetually. If this is not unfair, then I do not know what other adjective to use.

Mr. Speaker, I have had two meetings with you when you were the Health Minister. I gathered from those meetings that you are a fair-minded person who has the welfare of the masses at heart. I thus hope that you will not hesitate to do something good for the health workers of this country should this piece come to your attention.

Fortunately, Mr. Speaker, Ghanaians are not on George Orwell’s Animal Farm so they should not be made to believe that “All animals are equal, but some animals are more equal than others." Doing so will make the Ghanaian health worker and other people of Ghana believe that even though the health workers deserve the vehicle importation tax waiver, the MPs are more important in this regard. Mr. Speaker, do something good for the health worker. Let us discourage the elite-centric democracy.

Crowd jeers, boos Akufo-Addo on stage; chants 'away!' amidst...
3 minutes ago