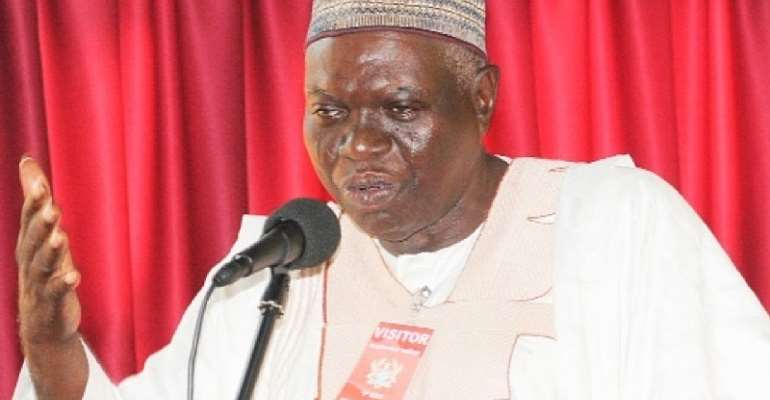 ONE FINE DAY IN 1986, I attended a ceremony held in Lagos to celebrate the award of the Nobel Prize for Literature to my friend, the Nigerian playwright, Wole Soyinka.

After the ceremony, I was looking for a taxi to take me back to my hotel when I heard my name shouted out from amongst the throng: “CAMERON!”

I turned round. Who in Lagos knew me?

A tall, smiling guy approached me and threw his arms around me.

“I am Razak El Elawa. I used to work at the Daily Graphic!”, he said.

I now had one of those moments that those who have clocked long years on earth are often confronted with: I didn't remember the guy!

“Gee!” I thought. This guy had probably worked for me when I was editor of the Daily Graphic, and I didn't remember him?

I was confused. I had always prided myself with possessing a prodigious memory. Was it gone?

But Razak soon put me at my ease by telling me that he arrived at the Graphicfive or so years after me! He had also been Press Secretary to our 1979-81 President, Dr Hilla Limann, he said.

Saved from the embarrassment of not recognising him, I said enthusiastically: “We must meet!”

But we didn't (as usually happens). I regret that fact very much, for Alhaji Razak El Alawa passed in early May 2021, at the age of 76 -- bringing to a disappointing end, my hope of getting to know him much better.

We had laughed at each other for missing the opportunity to hang out in Lagos, when, years later, he invited me to his house in Accra to enjoy the main annual Islamic Festival celebrations, with his good self and a number of guests from the media, including my old colleague, the sports writing ace, Ken Bediako, and a few other friends.

What I didn't know when I got to Razak's house was that he had a nice surprise in store for me – one of his other guests was Joe Lartey, the legendary football commentator!

Now, Joe and I went back a long way: as editor of the Ghana edition of Drum Magazine in the 1960s, I had been privileged to publish Joe's heart-stopping account of how he survived being torpedoed into the sea during World War Two, when he was serving as a sailor in a British warship!

But what brought down the house was when Joe and I narrated our separate tales of running into each other by accident on a Lagos street in the 1980s.

Wasn't it amazing that I had once run into both Joe and Razak by accident in Lagos, and we were, all of us, thanks be to God, socialising together in Accra? What are the chances of meeting someone familiar in the streets of an over-crowded, hyper-bustling city like Lagos? And doing it twice over? Was it a million to one chance? It was quite incredible.

I say all this to highlight the fact that being with Razak was tremendous fun. He had imagination – imagine inviting Joe Lartey to a party and not telling the other guests that “OVER TO YOU, JOE LARTEY!” would be there. The laughter that Joe and I belted out, as we recalled how he had insisted -- successfully -- that I should jettison my programme for the day and go with him to the house in Lagos which he shared with two of our former GBC colleagues – the brothers Sidi Ali – could have enlivened a meeting of 'The Dead Souls' Society.'

Razak had a generosity of spirit that was absolutely unsurpassed. Over here, too, I chanced upon him one day at the History Department of the University of Ghana, where I was doing research into my forthcoming book on the life of the late Prof. Albert Kwadwo Adu Boahen.

Quick as a flash, Razak arranged to meet me later, and out of our subsequent conversations, he published some biographical articles about me in his readable column in the Daily Graphic.

He won my heart with the series because he was not only accurate in what he wrote, but also, he was empathetic. His own background of being brought up in suburb of Kumase enabled him to fully appreciate the difficulties I had passed through in early life, as a village boy who, unlike him, had never seen the inside of a secondary school, but had endeavoured to acquire qualifications through private study by correspondence courses. He noted with exactitude, that I had studied "mostly under candlelight" (!) after a full day's hard work as a pupil teacher in a primary school.

Razak was, in fact, that not-so-rare bird in Ghanaian history: a person of Yoruba extraction, born and bred (as I have said before) in Kumase, and thus totally bilingual. Or trilingual, if one adds English. I had attended school with a boy of a similar background – my best school friend, Ladipo Joseph. Others in my school were Tafa and Raimi, all of whom spoke Twi without the slightest accent, unlike their parents.

Culturally “multi-ethnic”, thus, Razak was also a very cultivated individual as a person. Well versed in history, his interests cut across the disciplines that journalism tends to force upon some of its practitioners. For instance, I once encountered him engaged in a spirited technical discussion of railway and road-building projects in Ghana, with a European engineer whom he'd invited to the International Press Centre in Accra!

Perhaps I shouldn't have been surprised at that, for Razak was the three-times winner of the coveted “Journalist Of The Year” award of the Ghana Journalists Association. This award took him to Liverpool, in England, where he must have taken the opportunity to exchange ideas with all manner of businessmen, thereby acquiring an interest in developmental matters.

There is so much to say about Razak – how he was uniquely blessed in being one of the pioneers of the University of Ghana's Department of Post-graduate Communications Studies, both as a student and as a teacher. (His students, I believe, included ex-President John Mahama).

And one can only contemplate with envy, his service as a leader, both in and out of campus, of the famous (notorious, I should say) “Vandals” of Commonwealth Hall, Legon!

He also distinguished himself as a thorough-going professional journalist, by enthusiastically embracing a posting to Northern Ghana as the Daily Graphic'sregional correspondent, based in Tamale. A more superficial character would probably have considered the posting to that remote area of Ghana as the manifestation of being sent into 'exile'! Yes – too many journalists do want to be based only in the 'metropolis' – the centre of things. But, of course, it is in the remote areas that some of the most important stories unfold which, if covered properly, can bring real transformation into the lives of the journalist's local hosts and increase his influence in the locality.

In fact, cosmopolitan ingénue that Razak was, he adopted the local, (then) obscure football club, Tamale United, as a fan and mentor, and helped it to become a formidable team in the national league.

My final sight of Razak occurred at the 70thanniversary dinner of the Daily Graphic, where, like me, he was given an award and had his name mentioned by President Nana Addo Dankwa Akufo-Addo as one of the unforgettable writers of the paper. Sadly, our face masks made it impossible to exchange anything but a few cursory words at that meeting. Of course, I didn't realise that those muffled words would be the last I would ever hear from him.

Truly, my colleagues and I have lost an immensely sociable, erudite character, who enjoyed conversation and was endowed with the one quality that, above all, marks a journalist out as an excellent 'Pro' – curiosity. (For instance, he was one of the few people who researched and knew the origins of the moniker I use for emails! (He always greeted me with the full nomenclature, to the puzzlement of those not so curious!)

Well, he will have no regrets about being granted time to rest – for I think he used the time granted him on earth to enjoy life as much as possible.

I pray to the Almighty to look after the large family that he has left behind. I urge any organisation that benefited from his expertise not to close the book on him but to take an interest in the continued welfare of his family, for life for freelances in Ghana is anything but rosy, as publishers (especially electronic ones) hardly pay anything to the writers whose untiring efforts earn publishers plenty of adverts!!

[PS:By the way, the Ghana media, in its coverage of Razak's life, has done one of its practitioners proud: for if you GOOGLE Razak's name, you will be pleasantly surprised at the number of warm-hearted entries you'll find!]