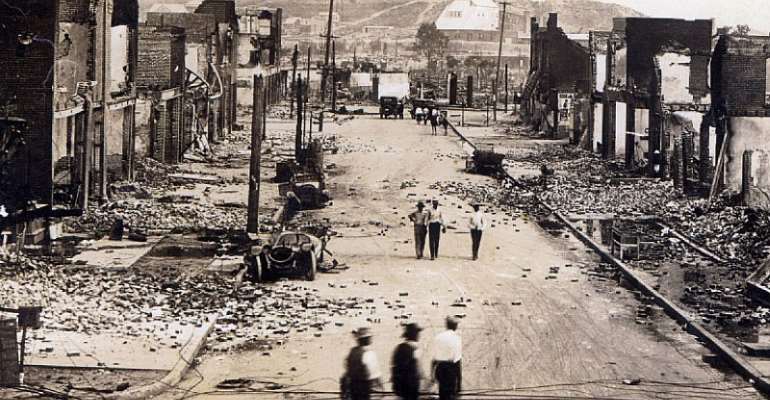 There are abuses everywhere. Abuses in one place does not make abuses in the hands of others justified. When abuses are based solely on ethnicity, color, religion or creed; others must stand up and speak out against it. If you do not, sooner than later, your turn will come. The last to be abused only makes it easier for abusers; since nobody is left to protect and defend you. No one and no where should mankind tolerate discrimination.

One hundred years ago, there was a Massacre of about 300 African Americans and thousands wounded in Greenwood Tulsa Oklahoma USA while defending their own “Wall Street”. Markets flourished based on their local intellect in businesses, trade and commerce run by different professionals that were supported and patronized within their local community. It is contrary to the label by which African Americans were given. The Greenwood massacre was not an isolated case in America. https://photos.app.goo.gl/vgjfUXv1LfLjMYYP9

These incidents and the sixties Civil Rights Protest were enough for some African parents to dissuade their children from going to the United States because of the riots in the 60s and 70s. Some students settled for Europe and Canada instead. Canada had comparatively, had less Blacks in the 60s and 70s.So Caribbean and African students were better tolerated. Canadian Blacks, a minority in Nova Scotia and St. Catherine in Ontario ran away from the United States or were again relocated from the Caribbean. https://photos.app.goo.gl/C3ZXvTG2gPo4PhXa8

Canada North of the United States, where slaves escaped during the "Underground Railway" had their own blemish against Native Indians. Some remains of Native children abused were dug up recently. The report documented horrific physical abuse, rape, malnutrition and other atrocities suffered by many of the 150,000 children who attended the schools, typically run by Christian churches on behalf of the Federal Government, from the 1840s to the 1990s.

It found more than 4,100 children died while attending residential school. The deaths of the 215 children buried in the grounds of what was once Canada's largest residential school are believed to not have been included in that figure and appear to have been undocumented until the recent discovery as reported by Anna Mehler Paperny, (Edited by Rosalba O'Brien).

An Ethiopian saying that when you dine with strangers, you must save your love for your family. We must not lose sight of the fact that wherever we are, we are Africans. Since many African Youths see no way out of the class and outcast system that treats them like serfs at home, they are willing to endure worse treatment outside which natives in abysmal situations in those countries reject: as long as Africans make enough money to claim bragging rights in Africa. They naively translate money into human dignity their old freedom fighters fought for.

Like other atrocities until phone cameras captured them, these abuses were defended, denied, or hidden in the court of laws. But resulted in the disproportionate number of African Americans in the Correctional system. Any flimsy excuse to kill a Black man can be defended to a chosen receptive jury in a court of law on the hypocrisy that the victims were the violent and unpredictable ones. The benefit of doubts given to abusers based on hypocrisy, knowing history of injustice fuel impunity.

Africans do not experience the history of injustice against African Americans but it also turns out that some African American descendants from Tulsa never heard of the Greenwood Massacre because it was kept and hidden from later generations. Indeed, there are middle class African Americans that grew up in middle class neighborhoods. They have never been to the ghetto but would be less than candid if they claim they never experience discrimination.

Many people wonder how Africans have survived all the cruelties from the time of Slavery in Africa to the present injustice at home and in Diaspora. Usually white people would unite to fight Natives and newcomers within them. But Africans and even Blacks in Diaspora would rather fight one another to death than concentrate on the discrimination that ails them. Blacks disrespect their own Black in most situations.

An Igbo proverb warned us that when brothers fight to death, strangers inherit their fathers’ estate. You can hardly find a Black man from General Colin Powell, the former United States Secretary of State to the present Republican Senator Tim Scott from South Carolina, that has not been stopped while driving Black. During the trial of O. J Simpson, Mark Fuhrman, one of the investigating officers said that any Black man that was not in a three piece suit driving a Cadillac, would be stopped. https://photos.app.goo.gl/XovLoENKBymnSVKe9

Nevertheless, we had this uncle that told us how white people are the best of all humans, unlike Africans that would pull one another down in a minute. Our uncle spent years in Europe and always spoke glowingly about white people. It was stories like this plus the branding, glamor and propaganda of today that lured most Africans Youths willingly overseas. Some sell all they acquired in properties and wealth to pay agents, buy tickets and visas.

Mind you, in our uncles and fathers’ days, African children were put in cages for display like zoo animals in Europe. Azikiwe called America God’s own country but was shocked into reality when J.F Kennedy and later Martin Luther were shot. They were quite aware of Africans that fought World Wars I and II that were told to fight for freedom in Europe in order to get their own freedom at home. Our uncles never told us any of these.

The rush by African Youths to foreign lands is based on stories told by those that left on the character and reputation of those they met and were generous to them. Africans' love for adventures in foreign lands is a common curiosity in humans. Movements into arable and more favorable environments have been going on for years.

People wonder where the hatred against African comes from. It is a desperate act to make money out of cheap labor and demonize a group of people for life by laws and regulations that keep them useful serfs. It is a philosophy upon which political parties are based and leaders elected. If the right to vote goes against them, they storm the seat of power and restrict votes.