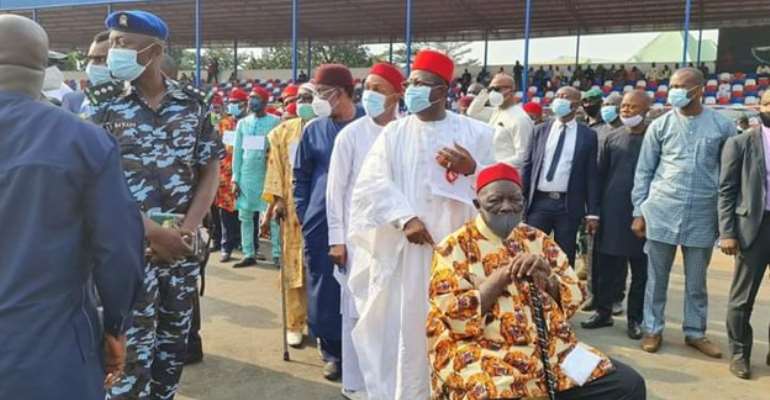 A video clip is right now making its rounds in the public arena. In summary, the clip wired on WhatsApp and other social media forums, shows the President-General of Ohaneze-Ndigbo, Professor George Obiozor advocating for the Presidency to revert to the South-East, come 2023. I think, the Igbo are far more creative, far more innovative than that. One fact they contemplate, in the first place, is that the way things are happening in Nigeria today, given social values that deeply denigrate the very essence human life and dignity with unprecedented impunity, no one is very sure that there will even be an election in 2023. Indeed, some political observers have actually suggested that General Muhammadu Buhari might go down in history as the last President of Nigeria, if the rate with which the country is sliding into a failed state is not halted in good time.

To that extent, Obiozor’s concern about an Igbo Presidency in 2023 will definitely leave many Igbo elders baffled at his style of leadership. His seeming theatrical approach to the underprivileged conditions the Igbo find themselves in Nigeria could as well suggest that his long stay away from his people while he served his country as ambassador in some oversea countries actually alienated him from the understanding and appreciation of the true position and need of the Igbo in Nigeria.

Our people have a proverb that you struggle to acquire the land first before you look for a mat to sleep on. (Ana ebu uzo zota ani ma azoba ute)

And so, the first thing Professor Obiozor has to bear in mind as the leader of Ohaneze-Ndigbo, the apex socio-cultural organization of the Igbo tribe of Nigeria is that there is a dire need to scuttle the old ways of doing politics and go for the modern style which is prevalent in established democracies around the world. How to ditch the current political understanding among Nigerians and move on to a more progressive, more equitable political dispensation should be his first concern and his first task. Unless the proper conditions for the emergence of the right caliber of leadership Nigeria deserves, and which the Igbo can conveniently offer to Nigeria are laid down, every effort to maximize the country’s vast potentials in the service of the people of Nigeria will fail, no matter where the President hails from.

The point to consider is that when Nigeria acquired self rule from Great Britain in 1960, the country’s politicians of the First Republic inherited the “politics of power” from their colonial masters. Although, at that time, the federal constitution gave a reasonable scope for regional autonomy, tribal allegiance was subtly woven into the system. Nigerian politicians saw themselves as hailing from Hausaland, Igboland, Yorubaland, and impressed that notion on their followers. Together, they consolidated political power within their regions.

Britain knew that by such an arrangement it would always have an edge over its former colony and so remain relevant in the scheme of things in Nigeria – which some scholars have termed “neocolonialism.” The British left the scene through the door and came back through the window.

But a cursory look at the history and current political dispensation of fore democratic countries shows that they have long ditched politics of power in favour of politics of service delivery.

When Boris Johnson took up the mantle of leadership as the Prime Minister of Great Britain on 24 July 2019, he made this very revealing statement which is what modern politics is all about. “The time has come to act, to take decisions, to give strong leadership and to change this country for the better. And though the Queen has just honoured me with this extraordinary office of state, my job is to serve you, the people. If there is one point we politicians need to remember, it is that the people are our bosses. My job is to make your streets safer – and we are going to begin with another 20,000 police on the streets and we start recruiting forthwith. My job is to make sure you don’t have to wait 3 weeks to see your doctor (GP) and we start work this week with 20 new hospital upgrades, and ensuring that money for the National Health Service (NHS) really does get to the frontline. My job is to protect you or your parents or grandparents from the fear of having to sell your home to pay for the costs of care and so I am announcing now – on the steps of Downing Street – that we will fix the crisis in social care once and for all, with a clear plan we have prepared to give every older person the dignity and security they deserve. My job is to make sure your kids get a superb education wherever they are in the country and that’s why we have already announced that we are going to level up per pupil funding in primary and secondary schools and that is the work that begins immediately behind that black door. And though I am today building a great team of men and women, I will take personal responsibility for the change I want to see.”

If we take a good look at events in the last 50 years in Nigeria, we will easily discover that the reason the country is failing is because Nigerian politics has consistently been based on the acquisition of power. It is all about grabbing power and authority and not about service to the people which is actually what politics should address. Service to the people!

Rightly or wrongly, Nigerian politicians have often been blamed for not getting it right. There are the seemingly intractable activities of Boko Haram and other insurgencies in the north and parts of the south. There is the menace of Fulani herdsmen which has taken on national dimension. There are kidnappings almost every day somewhere in both the south and the north. There are cult activities everywhere, especially in the south. There is massive unemployment of even university graduates. There is the epileptic supply of electricity and no clean drinking water in the towns and in the villages, even in the urban cities. Even ordinary food to eat has become a luxury in Nigeria today. The people groan under a heavy yoke, suffering and smiling, as Fela Ransome Kuti would put it.

Politicians are blamed. No one seems to appreciate the fact that the problem with the country was inherited by the first set of politicians from the first day Nigeria had self rule. Everyone seems to forget that right from the first day Nigerians had self rule, the seed was sown for the wrong type of political dispensation. Over the decades, Nigerian leaders continued in that direction of political correctness, oblivious of the fact that the country could no longer continue to move in that direction without damaging its own very existence.

That main problem with Nigeria started when the first politicians were introduced into the politics of power. At that time, we heard people talk of power. Ahmadu Bello, Tafawa Balewa, Obafemi Awolowo, Nnamdi Azikiwe, Okotie Ebo and the rest of them practised and paid glowing tributes to the politics of power. They inherited it from Britain but never suspected it was diplomatic manipulation. Today, we still hear everybody talking of power. Nothing has changed.

So, Nigerians need to move from the politics of power to the politics of service delivery, if they want to save their country. And that is where Professor Obiozor should start from and concentrate on – advocating for the Igbo to speak with “several voices” for a change in the brand of political dispensation that Nigerian politicians are currently practising in the name of democracy.

Fortunately, the Igbo are on the lead in this creativity and innovation. Professor Kingsley Moghalu who vied for the presidency in 2019 under the banner of Young Progressives Party has instituted an organization that aims at switching Nigerian political practice from politics of power to politics of service delivery. That organization is known as TBAN – “To Build A Nation” and it already boasts of several intellectuals and concerned youths of Nigeria who are disillusioned and dissatisfied with the trend of affairs in their beloved country. They have come from many countries across the world for register with TBAN.

My take is that Professor Obiozor should lend his weight to this organization and with the massive efforts of all Igbo, no matter where they live, help wrestle authority from the current greedy politicians who have bluntly refused to see that politics of power is what is ruining Nigeria. Once the Igbo are able to institute modern politics in clear, unambiguous terms, possibly at the state and local government levels, an Igbo President would be able to make the difference in our service of God and our countrymen. Igbo business men and women can start complementing TBAN by beginning now to invest in their own home towns and local government areas to create jobs for their teeming population of young people. To make this dream come true is Professor Obiozor’s most challenging task.