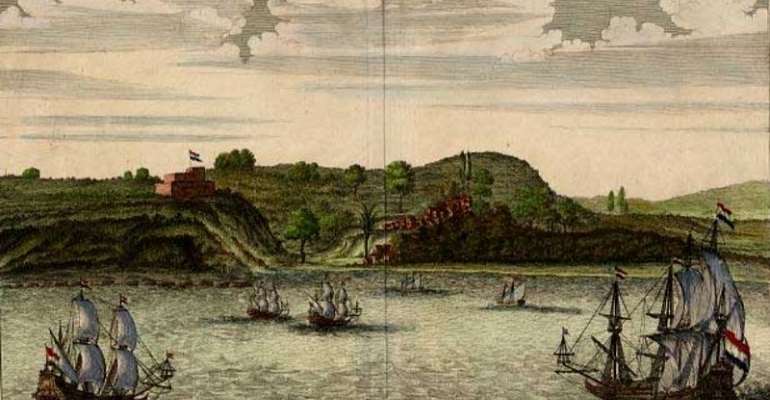 Takoradi has always been the pride of Ahanta and will continue to be despite the language shift from Ahanta to Fante. There are many factors to that and hopefully history will correct itself someday for Ahanta to gain its lost glory in Takoradi. Natives of Takoradi have always identified themselves to be Ahantas and that alone brightens the future for us and hopefully with concerted efforts, we will make things right.

As far as Ahanta is concerned, there has not been any group of people who have been loyal to the traditions of Ahanta more than the people of Takoradi. It used to be one of the strongholds of Ahanta in ancient times until very recently when everything turned upside down in Takoradi making it to lose its Ahanta fragrance.

I hear there has always been litigations to cede Takoradi from Ahanta Traditional Council and that saddens me a lot. Oh my beloved Ahanta! Where did we go wrong? How did we get here?

Know and understand that unity is strength and for that matter no combined forces can break brooms if tied together. It is time to pull our strength and come together as one people with common destiny than continously allow ourselves to be used to serve the interest of others against our own collective well-being. We still have chance to make things right for ourselves and our future generations.

Takoradi has always remained the largest, prominent and most influential town in the history of Ahanta. Whereas Owusua (Busua) remained the central seat of government, governance and politics, Takoradi remained the seat of commerce and the "life wire" of ancient Ahanta. When the Europeans came to Gold Coast, they described Takoradi as "populous" and why popolus? They found more people living in one town or village in Takoradi more than all other places they have been, especially along the coast of West Africa.

Life in Takoradi was already "cosmopolitan" and booming before the arrival of the Europeans. Life there has always been vibrant with trading and commercial activities way before our European friends arrived on the shores of Takoradi. The Ahantas of ancient days were converging there for their trading and commercial activities. It also served as a link between the coast and those Ahantas in the hinterlands. In fact, we were told that it used to be a large market center in ancient Ahanta.

Whereas the native name of Takoradi has been buried deep in the crust of the earth, the current name traces its origin to Fort Tacaray also known as Fort Wisten which was built by the Dutch in 1665. I have heard several accounts and narrations including one of a certain "Ntakor tree" under which the forefathers of Takoradi were believed to have first settled but that narration is actually very inconsistent with Ahanta. The argument that Takoradi means "NTAKORASE" which is translated to mean under the "Ntakor tree" does not resonate with Ahanta but this is academic exercise and a subject of research. I on the other hand find the Tacaray narration more appropriate and convincing as it shows how the "Tacaray" became corrupted and eventually came to be known as Takoradi that we know today.

Fort Tacaray as I earlier mentioned was built in 1665 as a trading post for the Dutch but the native Ahantas protested them constantly. The natives of Takoradi have a long history of protesting and resisting the Europeans, particularly the Dutch. They never wanted to have anything to do with them and let alone to find them on their shores so they were constantly at war with them. Whereas the Europeans seemed to have found comfort in the neighboring town of Sekondi, the natives of Takoradi were always at war them and that made Wellin Bosman the Dutch explorer who toured Gold Coast in 1700s to describe Ahantas as martial. Martial because they were always protesting and fighting them.

In 1864, Fort Tacaray was again destroyed probably because of Ahanta resistance and left abondoned by the Dutch. In 1864, Badu Bonso II had been killed and for more than 10 years the Dutch had prevented installation of a new Ahanta king by maintaining large presence of military and deployments in Ahanta particularly in Busua but the Ahantas were involved in guerrilla tactics with the Dutch. However, a Dutch map of 1791 showed that the Dutch renewed their presence there and actively involved in trading activities until 6th April 1876 when the Dutch sold Fort Tacaray together with all their possessions in Gold Coast to the British and left.

That very action of Badu Bonso II attracted reprisal attacks from the Dutch when the news reached Haque and in July 1838, the Dutch launch a reprisal attack on Ahanta after they brought mercenaries from Haque lead by General Verveer. In second Dutch-Ahanta war of 1838, Badu Bonso II himself was killed and several Ahanta nobles and royals were captured and sent to Elmina to be transported to Dutch West Indies. Takoradi was completely destroyed and left in ruins. After the war, the natives returned and resettled until the Dutch left in 1876.

Where we see as Takoradi of today is is not the original township. The original settlement is somewhere near Takoradi Harbour along the Coast. In fact, there were dotted Ahanta settlements there but were all relocated to pave way for the construction of Takoradi Harbour in the 1920s by Gordon Guggisberg's colonial administration. It the reason why the current city of Takoradi is one of beautifully outlayed cities in Ghana. The English modelled it to look like their cities in England.

As years go by the name Tacaray corrupted and by 1700s, the Dutch themselves called the place Taccorari and similar pronunciations by other Europeans like the Portuguese, the Germans, the Danes and the Swedes. In 1880s the place had come to be known as Takorady and then eventually Takoradi as we know today.

Takoradi is Ahanta land and remains our pride.