Ahanta Wars Of Resistance, The Story Of Female War Captains From Pretea 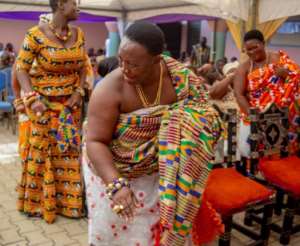 The Ahanta state was built through blood and toil of men and women who sacrificed their lives and comforts to protect and safeguard Ahanta and its future descendants. They gave their all to ensure that Ahanta does not go extinct.

We are here because our forefathers and ancestors gave up their lives and comforts for us but it is sad that these days we are not living as Ahantas enough. Everything about Ahanta has fallen apart and we are losing everything including our very language.

Today, Ahanta is not at war or under attacks from neighboring tribes but we has lost our sense of pride, dignity and identity as people. I just hope our forefathers and ancestors will forgive us for not giving some reverence to their sacrifices. We just getting too selfish with our ways of lives hence the reasons Ahanta is being teared apart by ourselves.

Ahanta was borne out of war and for Ahanta, if it comes to war, though women are the last resort, and anytime the women get involved, the situation turns in favour of Ahanta. One of such situation is the story of female captains from Pretea who saved Ahanta when all hopes were lost.

When strength of men failed, the mantle always fall on women as a matter of necessity, the women of Ahanta were always able to turn situations to their favour.

On several occasions, women fought along side with men to ensure that Ahanta prevails over its enemies. Both men and women have contributed their quotas in equal measure and proportions to bring Ahanta where we are today.

Today, I recount the heroic exploits from the war captains of Pretea who were all women. For them, it was desperate measures and means to protect their lands from invasion.

The late Kojo Andoh, one of the refined sources of Ahanta oral traditions described them as women of bravery, courage and valour. They defied all odds and stuck to fate and fought with destiny to make Ahanta prevail over its enemies.

According to Kojo Andoh, Ahanta would have fallen to Wassa invasions if the Pretea women had not intervened. They are the ones who saved Ahanta from incessant attacks from the Wassas and it is because of them that we still have a tribe called Ahanta.

Had it not been the interventions of the Pretea women, we would have gone extinction by now. They were the ones who resisted the Wassa people and fought on the brink of their lives to protect and safeguard Ahanta.

In the war of resistance, Ahanta lost most of its lands to Wassa. It is the reason why the Wassa people have advanced beyond the Bonsa river and encroached on the banks of river Pra.

The wars of resistance were several attacks launched on Ahanta by Wassa, Adom and Encaser. Ahanta at the time was facing attacks from all angles - Fantes, Wassa, Adom, Encaser and other neighbouring tribes and so various towns were left to their fates to defend themselves. It was such a difficult time for Ahanta because Ahanta has lost most of its warriors due to years of prolonged and protracted wars but in the midst of the attacks, the war captains of Pretea emerged.

Pretea at the time had fallen to the Wassas and its citizens have fled for their lives but the women of Pretea were going to organize themselves into groups of bandits and launch attacks on Wassa in guerilla manner. The Pretea women deployed heavy machinations of guerilla warfare.

In the wars of resistance, the Wassa people fought their way and reached places like Sekondi, Shama and were closing up on Busua which was Ahanta's last stronghold. In fact, they had planned capture Busua and behead the king and declare victory over Ahanta.

In the Pageant of Ghana, Freda Wolfson described Wassa and Adom people as conquerors who fought their way almost to the coast and taken over most of Ahanta lands. The wars were intense to the extent that Ahanta Ahanta had ran out warriors but the Wassas and Adom tribes kept closing up on Busua but from nowhere Pretea women started attacking them from behind.

The Pretea women intensified their attacks to the extent that the Wassa and Adom people run out of food supplies and started to retreat from the war fronts. Other women were also going to join the men at the war fronts and to some extent, children were involved.

With breath of hope, Busua with little forces available to them started advancing as the enemy tribes were retreating. After the enemies retreated, the Pretea women still going to launch series of attacks on them in a very uncoordinated manner.

They would attack farmlands of the enemies and burn them. They attacked enemy tribes villages and fought in guerilla manner till they gained control of their lands. At last Ahanta Ahanta had prevailed again and thanks to the female war captains of Pretea.

Why are the refers to as war captains? According to the late Kojo Andoh, they were numbering about 20 to 25 group of women with each of the group having a well laid down system and structure of command. They operated and attacked enemy tribes from diverse angles thereby making it difficult for them to concentrate where to deploy their forces.

Their story and success at war fronts remains a mystery till today. In fact, the enemy tribes believed that they were being attacked by spirits or ghosts and as a result they abandoned the war and retreated. Even when they had retreated, the war captains of Pretea continue to launch attacks in a very sporadic manner.

If today, we still have a tribe call Ahanta and have some lands to ourselves and our chiefs are litigating over these lands, we should always remember the Pretea women who saved Ahanta from extinction.