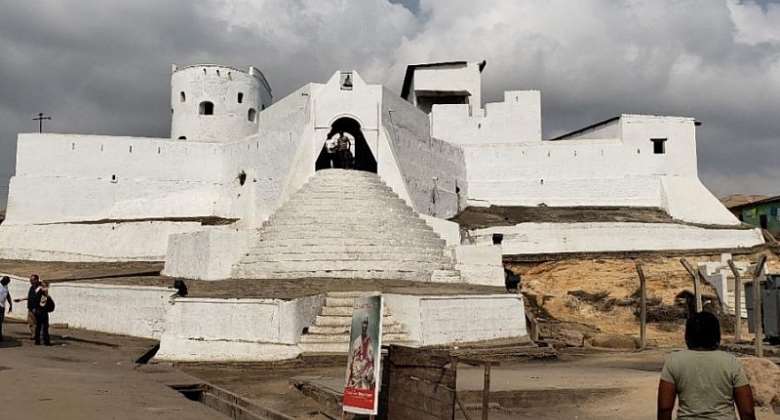 Could the white man be the devil that the Bible mentioned as the thief who came to steal, kill and destroy us? I think they are. If I look at present state of Ahanta, I am of the firm conviction that the Europeans were actually the devil that came to Africa to steal, kill and destroy and for Ahanta, they succeeded in robbing us of everything including our identity as people and it is the reason why we have the people of Shama constantly say that they are not Ahantas.

Today, it is a taboo in Shama to say that they are Ahantas. If luck is not on your side, they will lynch you to death but can we blame the people of Shama for this? I don't think so.

Whether Shama is Ahanta or not, one needs to look at the Ahanta state prior to the arrival of the Europeans and then we can put all the arguments in their right contexts and perspectives.

Early European explorers like Jean Barbot and William Bossman and others who toured the coast of Guinea referred to Ahanta as a country that lies between river Pra, Bonsa, Ankobra and the Atlantic ocean. By their definition for what was then the country of the Ahanta people, Shama certainly falls within its territories and even when Jean Barbot was mentioning the major Ahanta towns in writings "Source for Slave Coast of West Africa", he mentioned Shama as one of them so how come that the people of Shama say they have never been Ahantas?

Shama was in the center of affairs as far as European invasion was concerned. The Europeans maintained a constant eye on Shama for one reason - gold. In fact, Shama is on record to have been the first place in the history of Gold Coast where the Portuguese undertook large scale mining before eventually settling at Elmina. After facing hostilities in Shama, they resorted in building their castle in Elmina but kept eye on Shama until they built Fort Sebastian there in 1523.

The presence of Fort Sebastian in Shama begun the "Fantenazation" of Shama and by the mid 18th century, Fante had become a popular language more than native Ahanta language due to the ongoing trade at the time. The sighting of Fort Sebastian by the Portuguese in Shama made the Portuguese to indirectly administer Shama from Elmina and when the Dutch dislodged the Portuguese and took over their Fort and Castles, they also continued to administer Shama and Axim from Elmina as well.

But what is the position of Shama in oral traditions of Ahanta prior to the arrival of the Europeans? This year, I interviewed Nana Badu Bonso XV, paramount chief of Ahanta Traditional Area as part of a research project and he referred to Shama as "Ɛsa", the place where all Ahantas came before finally moving to their respective destinations. If that is really the case, why then do the people of Shama still insist that they are not Ahantas? I guess the rhetorical question are becoming too many but they are necessary for emphasis.

Ahantas are believed to have migrated from Sudan around 1070 AD and finally crossed the Pra River around 1229 and settled in their present locations. Soon Ahanta was going to become targets for attacks by other tribes who were also migrating and were looking for places to settle and in order to survive the incessant attacks, they organised themselves and formed a kingdom which though smaller in size, they defended their territories and managed to prevail over attempts by other tribes to subdue them.

In oral Ahanta narrations, the people of Shama had distinctive role to play and they were to ensure that the king of Ahanta never lack food in his palace. Why so? It so because they were asked to stay close to the Pra and the sea so that they can watch on Ahanta from attacks from the east and so farm the fertile lands to feed their relatives at Owulosua now Owusua or Busua.

It is also said that when Ahantas got to where it is called Shama today, the leader at the time said that it will not be wise for them all to go in the forest as they do not know what lies there, so some were selected to remain as others move ahead. The idea was that if they go to the forest areas and do not find the place habitable, they would come back and join their relatives at where is presently knowns as Shama but also if they find place suitable, they would come back for them to join them wherever they may be.

So, Shama was strategically placed by our forefathers to watch over Ahanta. Those were the days when the whole of Ahanta was under the authority of the king who ruled from Owulosua and it is said that during the days of Kwamnla Kokolor, he divided Ahanta into three blocs for military reasons. The people of Shama who are direct relatives of the people of Owulosua fell under the Sekondi bloc and gradually they were drifting from Owulosua and were reneging on their roles of ensuring that there is always food in the palace of Ahanta kings. They thus felt more responsible to themselves than their old roles of bringing food to the palace of the king.

It said during the "war of destiny" which was fought at present day Anoe near Kojokrom or Kojosua, it was Oduku Nyanke from Shama who offered his blood as a sacrifice just for the people of Shama in particular and Ahanta in general. It is said that the war got intense so when the oracles were consulted, it came apparent that Ahantas were to perform some sacrifices and nobody was prepared to do so until Odoku Nyanke placed his sword down offered himself.

In the end, Ahanta succeeded in overrunning the enemies and drove them away but that could not have happened without the blood of Oduku Nyanke from Shama hence the name war of destiny. For many years Ahanta were celebrating the the sacrifices of Oduku Nyanke until the advent of Christianity because it was considered to be fetish and evil.

In 1656, Ahanta chiefs signed the Butre Treaty and then all the land areas including Shama which were considered to be the country of Ahanta people came under the administration of the Dutch. Then in 1830s Badu Bonso II assumed the reigns of Ahanta as the king and realized that the towns with Castles and Fort of Europeans were claiming their independence of Ahanta. They were refusing to recognize him as the king of Ahanta

Towns like Sekondi, Shama, Axim and others were going to claim that they have never been under the rule of Ahanta kings and so that made Badu Bonso II to begin to protest the terms and conditions of the Butre Treaty and he was going to go on execution spree for people who would go against his directives. He was going to ban the sale of gun and gun powder from Ahanta. Badu Bonso II became dreadful and ruthless.

After the death of Badu Bonso II, the Dutch disbanded the office of Ahanta kings and dealt with individual chiefs and appointed some paramount chiefs whom they would trade with until 1871, when the Dutch sold all their trade possessions in the Gold Coast to the English and left the Gold Coast for good.

The English also refused to recognize successive Ahanta kings as true rulers of Ahanta and to settle this, the English appointed F.G Growther to tour the whole of Ahanta and study the people and make his recommendations. Growther found the people of Shama to be more Fantis and also found the people of Axim to be more Nzema but failed to recognize that the proximity to these tribes and colonial influence might have caused changes in their language.

In 1912, F.G Growther recommended that Axim, Shama, Sekondi and Dixcove be made paramount chiefs independent of Badu Bonso and so it was made. F. G Growther's report of 1912 eventually disintegrated Ahanta and was the nail that drove Ahanta into its grave.

In spite of all these, some of us remember the sacrifices of people like Oduku Nyanke placed their lives on the edge of sword for Shama and Ahanta.