Kojo NDA And Adom Wars or Wars of Bees 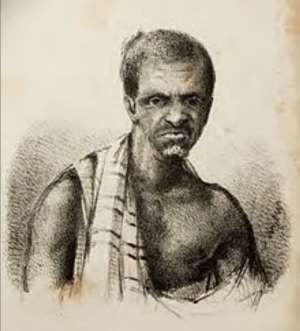 Ahanta has always remained the the envy of the neighbouring tribes. Surrounded by three major rivers - Pra, Ankobra and Bonsa and the Atlantic Ocean in the south, neighbouring tribes have always wondered what is in that enclave and out of curiosity, they tried to cross over to Ahanta but in all occasions, they failed.

To survive as a tribe, you must prevail against wars and Ahanta was no exception. Even though such a small tribe bounded by Pra, Ankobra and Bonsa rivers and the Atlantic Ocean, they have rich experience in military expeditions and strategies. Through military might and expeditions, they were able to clear their border lines particularly along the banks of Pra, Ankobra and Bonsa from the attacks of Akwamu, Ashanti, Fante and other tribes which attempted to go to war with Ahanta.

Knowing very well that their land is smaller in size, they always fought their enemies along the banks of the three bordering rivers - Pra, Ankobra and Bonsa. "Never allow them to cross the rivers" is a military principle and philosophy used by Ahanta kings and warlords to safeguard the territories of Ahanta from offensive tribes till the arrival of the Europeans and then everything started to fall apart in Ahanta.

In all these, there was one tribe that was a pain in the neck of Ahanta people - the Adom tribe but they were later going to be overran by Ahanta and their descendants were going to be dissolved into the Wassa tribe. It was a decisive action for Ahanta as far their rivalry with Adom was concerned.

For many years, Adom and Ahanta were rival states.The Adoms were always at the war fronts with Ahanta. They constantly attacked Ahanta from the Bonsa direction and would invade some Ahanta villages and take hostages and quickly go back to their homes.

The Adoms were engaged in the kind of guerilla warfare as Ahanta was not unify at the time. Each village and town was for itself until the rise of Kojo Nda also known as the mysterious twin. He took the fate of Ahanta into his hands and sealed it completely.

The Kojo Nda wars also known as the war of bees is believed to have fought between 1350 to 1400s. The narrations surrounding the war is so fascinating and intriguing to the extent that some said it's just a myth but whether it is a myth or not, there was a time when a man called Kojo Nda led Ahanta to many wars and prevailed over their enemies and he remains the first person to have brought all Ahantas under one authority at "Owulosua" now called Busua or Owusua.

I mean at the time, we did not have Badu Bonso I, II, III, IV and all that. African kings and chiefs having Roman numerals suffixing their names and titles is a creation of the Europeans and a misconception about kingship and chieftaincy in Africa. The whole stool and throne concept came from Europe and for us Africans, kings are creations of wars and Kojo Nda was one of such kinds in the case of Ahanta.

The story of Kojo Nda is the beginning of Ahanta to accept twins in their communities, especially among the royal families. He was born a twin and per ancient practices and traditions of Ahantas, he was outcast. His father neglected him and his mother so they lived in the sacred forest all their lives.

Years passed and soon the story of the mysterious child in the sacred forest became rife in Ahanta communities. Not much was heard about his mother from then but Kojo Nda became the man of the moment and the one who was going to lay the foundation stone for Ahanta unity and military actions.

It is said that he possessed the powers of the gods and granted the wishes of the gods. Some said he was a god himself because he changes in appearance.Ahanta just like other tribes were living apart until the days of Kojo Nda when he sought to unify them. He was the first to unify all Ahantas and organized Ahanta into formidable military force along the Atlantic coast.

It is said that the Adoms made attempts to invade Ahanta in 1350s so upon several consultations, Kojo Nda told all the Ahanta warriors that they should go home. He will go to the war by himself. It is was said that the enemies have then amassed at the bank of the Pra river and were making all efforts to cross over to Ahanta but Kojo Nda insisted that he would go to the war all by himself.

Reluctantly, the warriors of Ahanta returned to their homes with little trust in Kojo Nda but were rather waiting for their fate as the enemies approach. To their surprise, a swamp of bees from nowhere invaded "Owulosua" and then headed towards the enemies' direction. The enemies fled and for continuous 7 days, beefs hovered over Ahanta and the banks of Pra, Ankobra and Bonsa rivers without a sting to any Ahanta.

In oral Ahanta narrations, he is on record to have used this strategy to have scared away not only Adoms but other tribes which made offensive attacks on Ahanta. For many years neighbouring tribes feared to go to war with Ahanta because of bees.

In his last war with Adom, he mobilised forces from Axim, Sekondi, Takoradi and all the major Ahanta towns and faced off with Adom at the bank of river Bonsa and return to Busua with the head of the king of Adom and for many years Adom was going to stop harassing Ahanta for the fear of Kojo Nda and his bees.

Though a great and warring leader, he lived in solitude all his life. He never had a home and anytime he returned from war fronts, he would go back to the sacred forest where he lived all his life.

No one actually knew where he lived in the sacred forest till today. He never had a wife nor a child of his own. He only came to the rescue of Ahanta in times of need, calamities and crisis. In his last days, he warned Ahanta about the people who would come from the sea and said that they are the ones who will destroy Ahanta but not their neighbors and indeed, the Europeans came from the sea to destroy Ahanta.

He once returned from battlefield and went to the sacrifice forest and that was the last time he was seen. Some say he was a priest and others insist he was actually the first king of Ahanta people. His identity remains skeptical in oral as to whether he was a king or a priest but history hasn't forgotten his deeds though he was initially considered an outcast.

From oral traditions of Ahanta as handed to us by our ancestors and forefathers.