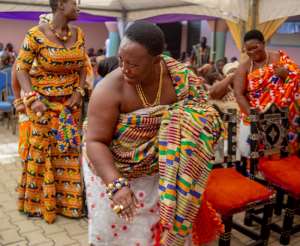 Aku Benya's story is a story of anger, resentments and revenge. She spent all her life avenging the deaths of her relatives and she did that to please her soul to a greater satisfaction.

What is her story and why did she go on killing sprees to avenge her relatives? Aku was a strange being and what made her more strange was the fact that she was a woman but did what men could not do during her time.

Aku has her place in oral Ahanta traditions and she is celebrated as a heroine who did not give her enemies the pleasure to rejoice over her miseries. She is remembered as a woman whose desire for justice made her enemies to plead for mercy and clemence.

Aku said to be a woman with strength and qualities of a man hence name Aku Benya. "Benya" in Ahanta means a man so Aku Benya simply means, Aku who is a man or the woman who is a man.

It is not certain when she lived but narrations showed that she might have lived at the formative years of the Ahanta kingdom and the period between 1300 to 1400s. Those were the times when Ahantas started to organize themselves as a nation due to attacks of enemy tribes, especially the people of Adom.

She is said to have come from a family of hunters who were residing somewhere present day Princess Town area. In fact, her family is described as very tall people with big palms and feet and they were much involved hunting wild games like elephants, lions and other dangerous animals. It said that their statures and heights were above the average man.

Even at a young age, Aku was involved in men games and was winning all competitions she engaged in. In village center boxing arena, Aku was beating men like hell and it got to a time that no man wanted to fight her. Men formed alliances with Aku just so that she would protect them.

She was said to be going for hunting at nights alone. Her popularity soared in Ahanta and other surrounding villages like wild fire when she single handedly brought down an elephant. She became known as the woman who kills elephants and so she had a popular song dedicated to her name - "Aku the fearless woman who killed elephant and call men to come and cut their portions"

Aku was such a popular character in her time but something happened that made Aku to turn all her energies to seek revenge and she did have it in multiples. She stopped all the adventures in hunting and spent the rest of her life avenging her relatives and she was very ferocious at that. She really got ruthless with her attacks on her enemies.

One night, enemy tribes invaded Aku's village and burned it all up. Nobody survived the attack except her. How she survived remains a mystery. Some said she had gone for night hunting when the enemies came to attack her village but whatever that the story was, she was the only one who survived the attack and she lived all her life avenging the attack to please her soul.

It is said that amid tears, she returned to village after the attack and and interred the burnt bodies of her relatives one by one amid loud wailings. Her wailings were so loud that other villages beyond the Pra could hear cry. Every night she would wail and call names of her relatives one after the other. It got to a time, the Ahanta king at the time sent for her to be brought to Owulosua but she refused to go.

Not quite long reports of arson attacks in the surrounding villages started spreading in Ahanta and other villages. After mourning her family members, Aku launched series of attacks on villages and tribes beyond Bonsa, Ankobra and Pra rivers. It was said that it was the Adom tribe who invaded her village to kill her relatives but she would attack villages beyond the borders of Ahanta and burned them completely.

Her attacks were very unpredictable and when you least expected her to attack is when she would come. The attacks went on to the extent surrounding tribes sent delegations to Ahanta king at the time to plead on their behalves but the king himself was finding it difficult to see Aku. All efforts the king made to reach Aku failed so it was said that she became deaf after the death of her relatives.

Villages got exterminated and tribes migrated because of incessant attacks of Aku and she avenged her people till her last breath. Aku was just unstoppable and her death ended the era of "giants" in Ahanta. She was the last of them.

She paid back her enemies in their own coin and gave them a dose of their own medicine. Though she was avenging the death of relatives, she ended up defining the boundaries of Ahanta as she went beyond the borders of Ahanta to launch her attacks.