Trump Has Taken America To Hell And Back! Will He Stop There?

Note: The Following Commentary Was Written 30 Hours Before Cnn Declared That Joe Biden Had Won The Us Presidency.
By Cameron Duodu 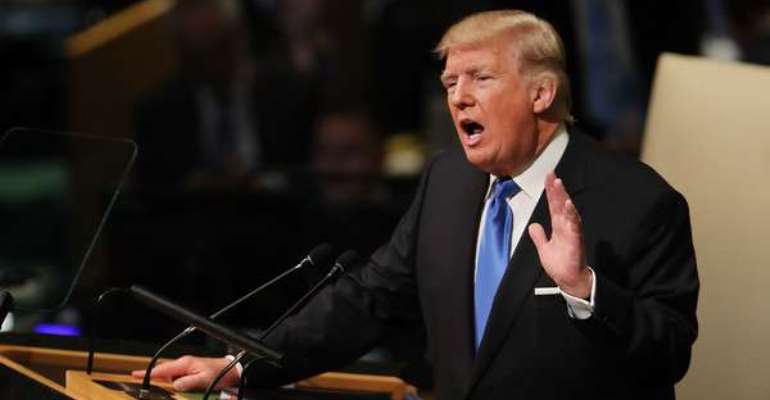 Donald Trump has been behaving like your childhood playground bully. He wants to appoint referee, because the ball is his. But having appointed the referee, he's not satisfied with that. He also wants to be able to nullify the decisions of the referee he has himself appointed. If he's not allowed to do that, he takes his ball home!

That's roughly, the character make-up of Donald Trump. If he had limit the vices of petulance and cheating to his private or business lives, it wouldn't have mattered so much. But he wanted to bring cheating into the American electoral system. He wanted to steal the votes of the American people, placing the country at risk of defending its democracy through a possible armed conflict. He should be tried for treason, no less, for seeking to steal an election in America!

First, he discredited the voting-by-mail system that has been practised in America for many. He told his followers not to use the system, even though during the Covid-19 pandemic, it was sensible to use it in order to prevent catching, or spreading the terrible epidemic. In fact, in some of the states where mail-voting was used, office-seekers from Trump's Republican Party won the election – thus disproving the charges of fraud Trump had made against the voting system.

When Trump couldn't block voting-by-mail, he insisted that the votes cast by mail should be notbe counted until votes done in person had been counted. But by delaying the counting of those votes, Trump was creating a false picture of how the voting had gone – late results were costing him the election. For after initially going into the lead during the vote counting, he began steadily to lose. Tantalisingly close numbers were being delivered by states that were ruled by Republicans – Georgia, Nevada, Arizona and (more importantly) Pennsylvania. As this was being written, it looked as if Trump had lost.

Trump didn't wait for the logical conclusion of his actions to emerge before – he accused his opponent of engaging in a conspiracy to steal the election! He demanded recounts. He initiated court actions to demonstrate that there had been electoral fraud. Trump's old pal, Rudy Giuliani, appeared on TV to announce that he and a team of lawyers were preparing to take their allegations of electoral malpractices all the way to the Supreme Court. So, the country might continue to be tense for some months to come.

But it's becoming evident that the country is already fed up with him. As he ranted for 20 minutes on America's TV stations, TV Anchors and Pundits openly criticised Trump for his “baseless claims” of fraud. Even on Fox News [a Trump sympathiser,the anchor, Chris Wallace said, “This is an extremely flammable situation, and the President [Trump] just threw a match on it.”

Indeed, the Television news networks played out Trump's possible defeat in a meticulous election night reporting, state-by-state results, with what The New York Timesdescribed as “prudence and context. But trust Trump – he had to intervene. “In a wee-hours appearance from the East Room of the White House, Mr. Trump claimed, without evidence, that the election was being taken from him by “a very sad group of people.”

His baseless statements — including an unfounded claim that the election was “a major fraud on our nation” — stirred up anchors at most major networks. Some cut Trump off from his remarks before he was finished.

“This is an extremely flammable situation, and the president just threw a match on it,” the anchor, Chris Wallace told viewers on Fox News. Referring to Mr. Trump’s false claims that he had “clearly won” Georgia and North Carolina, neither of which had finished counting votes, Mr. Wallace said: “He hasn’t won these states. Nobody is saying he’s won the states. The states haven’t said that he’s won.”

According to The New York Times,“Most [other networks] offered a quick fact-check afterwards, although NBC and MSNBCdid not wait for him to conclude before breaking in. “We’ve got to dip in here because there have been several statements that are just frankly not true,” the NBCanchor, Savannah Guthrie, told viewers...

“Trump timed his appearance to air during the networks’ evening newscasts, which draw the biggest collective audience in TV news. But the anchors broke in after a few minutes to correct some of his falsehoods.

“We have to interrupt here, because the president made a number of false statements, including the notion that there has been fraudulent voting,” said Lester Holt, the “NBC Nightly News” anchor. He added, “There has been no evidence of that.”

“On ABC, the anchor, David Muir broke, in and told viewers “There’s a lot to unpack here and fact-check.” The CBS correspondent, Nancy Cordes, spent about 90 seconds ticking through several of Mr. Trump’s baseless statements.

“MSNBC was the first outlet to break away from Mr. Trump’s news conference, after just 35 seconds. (MSNBC, which has a large liberal following, has been more aggressive than other channels in choosing to hold off on airing the president live.) The move “was not done as a stunt, or out of theatrics,” the anchor Brian Williams told viewers, but rather, “we just can’t have it. It was not rooted in reality and, at this point in where our country is, it’s dangerous.”

“On CNN, a caption appeared below Mr. Trump as he spoke reading, “WITHOUT ANY EVIDENCE, TRUMP SAYS HE’S BEING CHEATED.”

It's dangerous to predict American elections, but as the votes in Pennsylvania, in particular, rolled in, it appeared that Trump could NOT win, and that congratulations to PRESIDENT JOE BIDEN, are in order.