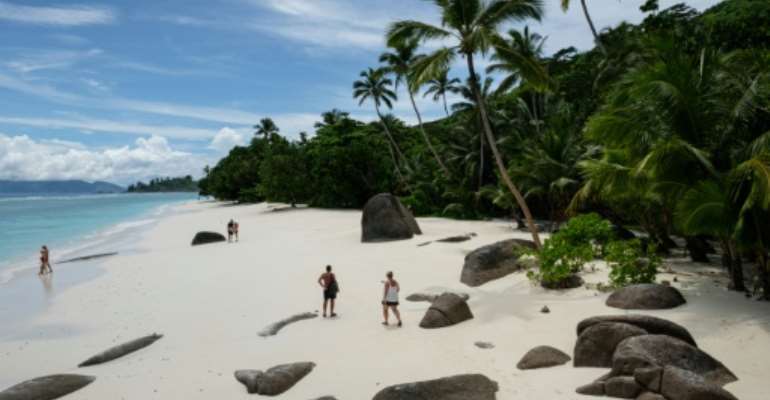 Tourism contributes around 25 percent to the Seychelles GDP. By Yasuyoshi CHIBA (AFP/File)

The Seychelles, with its idyllic white beaches and luxury resorts, has had only 149 cases of Covid-19, but the global crisis caused by the pandemic has ravaged its vital tourism industry.

The Indian Ocean island nation, famed as a honeymoon destination, took swift action against the virus in March, banning cruise ships and international flights and implementing a lockdown.

But even though the archipelago re-opened to tourists on August 1, the global downswing in travel and devastation wrought by the virus in major tourist-providing countries in Europe and elsewhere, has led to little improvement.

"Since the re-opening of the airport we have tried to re-open our establishment, but it is a catastrophe, we are running at a loss because there is no one," said Sybil Cardon, who had to let go of 10 percent of her staff at her hotel on Praslin, the second-largest island.

In Beau Vallon, the most touristy part of the main island Mahe, the Equinox scuba diving centre once did three or four excursions a day, taking tourists to see bountiful fish and marine life around the granite cliffs and coral reefs.

Now, in what is usually peak season to see the world's largest fish, the whale shark, there are "only a few tourists a day," said Manuela Alcaniz, who runs the centre.

She has kept her six staff on board using state assistance, and some of her own money.

Tourism contributes around 25 percent to the Seychelles GDP, according to official statistics, and along with the tuna fishing industry is the main earner of foreign currency.

In 2019, the archipelago welcomed more than 330,000 tourists, two-thirds of them from Europe. This represents more than three times the population of the islands.

In the first three quarters of the year, the country recorded the arrival of only 75,000 tourists.

According to the national statistics agency, the second and third quarter saw an 83 percent drop in numbers from 2019.

And government figures show more than 700 people lost their jobs in the hotel and tourism industry, increasing unemployment from 4.8 percent to 6.3 percent.

Since July 1 the government has put in place the Seychelles Employee Transition Scheme (Sets) to assist workers, paying their salaries in exchange for them following a training course.

"Currently, if I didn't have this help, I don't know what situation I would find myself in to pay back my loans and take care of my children," said Sheila Marie, who used to work as an accountant in a hotel and is now following a course in payroll management.

"It should give me enough credentials to find another job" if tourism doesn't pick up by December 31, when the programme ends.

The government has not said whether the programme will be extended.

Authorities hope tourists will be back in December at high season, but those in the sector are pessimistic.

"The airlines who are coming only have 50 people onboard, I am afraid they will stop coming," said Cardon who is also the president of the Seychelles Hospitality and Tourism Association.

Most tourists to the Seychelles, a high-end destination, come from Europe which is facing a second wave of the virus, prompting new curfews, lockdowns and movement restrictions.

Only travellers from a select list of countries are allowed to enter, with a Covid-19 certificate of less than 72 hours.

However since October 1, travellers from hard-hit countries like France, the United Kingdom and the United Arab Emirates, must now have a test less than 46 hours old, and must spend five days with restricted movement in a government-approved hotel.