Otumfuo couldn’t have said it any better: Mahama must show remorse for his errors in judgement! 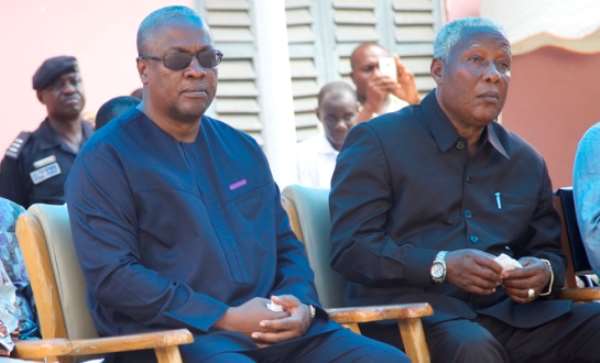 The great Ashanti King, Otumfuo Osei-TuTu II hit the nail on the head when he boldly and poignantly told former President Mahama that Ghanaians voted against him during the 2016 general elections due to ‘hunger and anger’.

But that being said, in as much as the critics have their democratic rights to criticise Ex-President Mahama for deciding to stage a presidential comeback despite his terrible errors in judgement which sent Ghana’s economy deeper and deeper into the mire, he is permitted by the 1992 Constitution to do so.

However, given the unpardonable economic meltdown under his watch (moved economic growth of 14% to 3.4% and a single digit inflation to 15.4%), Ex-President Mahama should do the right thing by eating humble pie and apologise to the good people of Ghana for wilfully messing up the hitherto favourable economy.

Well, if anything at all, former President Mahama should show a little remorse and beg discerning Ghanaians for forgiveness for needlessly raising Ghana’s debt from GH9.5 billion in 2009 to an incredible GH122.4 billion by December 2016 with a little to show for.

Dearest reader, if former President Mahama believes that he owes no one an apology for woefully dragging the 14% economic growth in 2011 to a disappointing 3.4% by December 2016, then what right does he have to come and stand in front of the good people of Ghana to solicit for their votes in 2020?

Some of us do not suffer from chronic amnesia and can recall vividly that Ghana’s Cedi to US Dollar in December 2011 was GH1.65 to $1.

However, due to catastrophic economic decisions, within five years the exchange rate took an unbelievable flight and stood at GH4.20 to $1 by December 2016.

The good people of Ghana cannot so soon forget and forgive former President Mahama for the business crippling dumsor in the last five years of the erstwhile NDC administration.

In fact, former President Mahama should stop taking Ghanaians for granted and ask for forgiveness for terribly collapsing the Agricultural sector by reducing the growth from 7.4% in 2012 to a miserable 2.5% in December 2016.

If former President Mahama really wants to lead the country again, then he should render an unqualified apology to the good people of Ghana for shrinking Ghana’s GDP from $47 billion in 2011 to $40 billion by December 2016.

Who says that discerning Ghanaians have forgotten and forgiven former President Mahama for recklessly giving out large portions of Ghana’s scarce resources to parasitic creatures?

Indeed, former President Mahama should, as a matter of necessity, apologise to discerning Ghanaians for unjustifiably giving apologists like Madam Akua Donkor of Ghana Freedom Party (GFP) two four wheel drive cars and a luxury bungalow (estimated to cost a staggering $470,000) for no work done.

So Ex-President Mahama thinks he does not owe the good people of Ghana any apology for egregiously giving away 58% of Ghana’s bauxite to his sibling Ibrahim Mahama on 29th December 2016, just a little over one week before exiting power?

If anything at all, former President Mahama should do the honest thing by apologising on behalf of his brother Ibrahim Mahama for egregiously evading import taxes to the tune of GH12 million during his tenure in office.

What is more, former President Mahama should acknowledge the concerns of Ghanaians over the purported GH800 million dubious judgment debt payments, including the GH51.2 million to Woyome, $30 million to the Waterville and $375,000 to Isofoton which resulted in the drastic reduction of capital expenditure, and as a consequence, most contractors were not paid by the erstwhile NDC administration.

Is former President Mahama not concerned about the wilful misappropriation of $175 million loan facility secured in 2012 which was meant to provide seven district hospitals but the NDC hierarchy misapplied on the blind side of Ghanaians?

To be quite honest, some of us would be extremely surprised if Ex-President Mahama failed to beg Ghanaians for forgiveness before 2020 general elections for surreptitiously diverting $6 million of a government loan facility of $175 million meant to provide seven district hospitals into researching the then governing NDC party’s chances of winning the 2016 general elections.

Well, former President Mahama should not think that Ghanaians still suffer from chronic memory loss, and therefore cannot recollect the over GH200 million SADA funds invested on trees which were reported to have burnt down, and the guinea fowls which flew to the nearby Burkina Faso without a trace. How bizarre?

Even though a competent court of jurisdiction has convicted and sentenced four former NDC officials over the embezzled GYEEDA and NCA funds meant to provide suitable employment for the youth of Ghana, former President Mahama must apologise to Ghanaians for superintending over such mess.

The last but not least, former President Mahama definitely owes discerning Ghanaians an unconditional apology over the scandalous Bus Branding, the Brazil World Cup, SUBA, amongst others.

From the look of things, unless former President Mahama decides to render an unqualified apology, the good people of Ghana will continue to ventilate their arousing disgust over his calamitous errors in judgement which culminated in harsh socio-economic standards of living.