No Prophet is accepted in his homeland: Why Akufo-Addo deserves a Nobel Prize 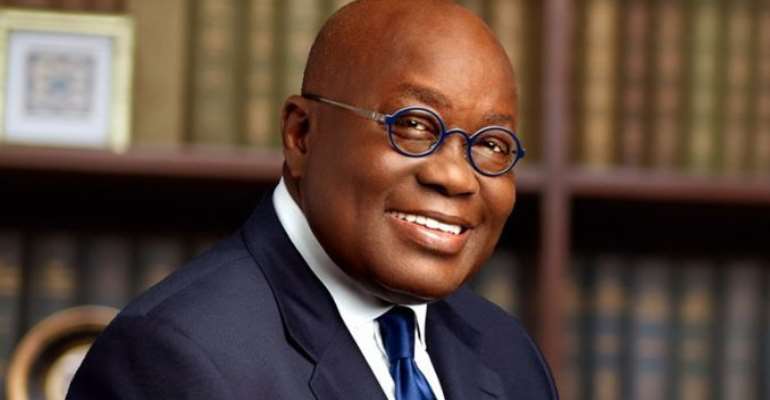 Some of us, in fact, were not the least surprised at all, when somewhere last year, the news spiralled through that President Akufo-Addo has overwhelmingly been adjudged the Africa’s best president by a Canadian-based research organisation-''Leaders of Tomorrow'' and US-based think tank ‘World Vision Forum’ (see: Akufo-Addo named Africa’s best president; yen.com.gh/ghanaweb.com, 14/07/2019).

While the Leaders of Tomorrow’s research placed President Akufo-Addo first amongst the best and outstanding list of 2018 presidents in Africa, the US-based think tank, the World Vision Forum’s research, put President Akufo-Addo 1st on the list in Africa and 3rd in the world of best presidents with vision, ideas, and practitioners of the rule of law.

In fact, the aforesaid research studies gave credence to the pronouncements by the likes of Ghana’s seasoned journalist, Malik Kweku Baako, the Director of the International Monetary Fund (IMF), Ms Christine Lagarde, and the United Nations Special Rapporteur on extreme poverty and human rights, Philip Alston, who before the deadly coronavirus, commended the Akufo-Addo’s government on its excellent economic performance.

But in spite of the reputable organisations and other prominent people’s positive remarks on Ghana’s economy, the naysayers have never been inspired. But are we really surprised? No, after all, hasn’t it written: ‘no prophet is accepted in his homeland’?

A few years ago, the Special Rapporteur on extreme poverty and human rights, Philip Alston, embarked on a mission to Ghana from 9 to 18 April 2018 in accordance with the Human Rights Council resolution 35/19.

The rationale behind the visit was to evaluate and to convey to the Human Rights Council on the extent to which Akufo-Addo’s government policies and programmes geared towards mitigating extreme poverty are in conformity with its human rights obligations, and, to proffer constructive recommendations to the Government and other stakeholders accordingly.

The Special Rapporteur on extreme poverty and human rights, Philip Alston, observes: “Ghana remains a champion of democracy in Africa, with power having regularly changed hands democratically since 1992.

“Ghana has no internal armed conflicts and has avoided the grave security threats faced by its regional neighbours. In development terms, its record of achieving certain Millennium Development Goals is impressive.

“Ghana met the targets for halving extreme poverty and halving the proportion of people without access to safe drinking water, and it achieved the goals relating to universal primary education and gender parity in primary school.

“In addition, Ghana’s achievements in providing free schooling and free meals to students, and its creation of a health insurance scheme for the whole country are considerable accomplishments” (Philip Alston, 2018).

Apparently, the UN Special Rapporteur on extreme poverty and human rights, Philip Alston, was adding to the Director of the International Monetary Fund (IMF), Ms Christine Lagarde’s observation that the Ghanaian economy is in a better place than it was in the previous years under the John Dramani Mahama’s administration.

Ms Lagarde opined that the Akufo-Addo’s government had made important gains towards macroeconomic stability, including inflation, which before the unspeakable coronavirus, declined to a single digit and within the Bank of Ghana’s (BoG’s) tolerance band; buoyant growth, averaging about five per cent between 2015 and 2018, and, over six per cent in 2017-18) and a primary surplus in 2017 for the first time in 15 years (IMF 2018).

Based on the preceding outstanding accomplishments, some of us cannot, therefore, stand accused of harbouring risible proclivity and persistently maintaining that President Akufo-Addo indeed possesses the attributes of a visionary leader.

Suffice it to stress that visionary leaders are noted for their positivism, idealized influence, inspirational motivation, intellectual stimulation and individual consideration (Nemanich and Keller, 2007).

On the other hand, inspirational motivation explains how visionary leaders consistently raise team spirit and encourage their subordinates to be creative (Bass et al., 2003).

If you would recall, during the 2016 electioneering campaign, the then presidential candidate of NPP, Nana Akufo-Addo, insisted: “I am promising you that within 18 months of a new government of the NPP, under my leadership, the face of our country, Ghana, is going to change”.

True to his word, within a short space of time, the Akufo-Addo’s government managed to improve upon the previously asphyxiated economy. Ghana's economic growth, which had slowed from 4.0% in 2014 to 3.7% in 2015 moved to 8.5% by 2018 following consolidation of macroeconomic stability and implementation of measures to resolve the crippling power crisis-‘dumsor’ (ADB).

Suffice it to stress that despite the extent of the economic mess left by the previous NDC government, the Akufo-Addo’s government took pragmatic steps and stabilised the economy within a short space of time.

Within that short period, the Akufo-Addo’s government efficiently raised the economic growth. Ghana’s economy grew provisionally by 8.5 percent in 2017 compared to 3.7 percent in 2016 (Ghana Statistical Service, 2018).

Interestingly, however, in the same year (2017), the Industry sector recorded the highest growth rate of 16.7 percent, followed by Agriculture 8.4 percent and the Services 4.3 percent.

However, two of the subsectors in the services sector recorded double-digit growth rates, including Information and Communication-13.2 percent and Health and Social Work 14.4 percent.

Yes, we, (Ghanaians) took a conscious decision on 7th December 2016 by electing the septuagenarian Akufo-Addo to rescue us from the economic bondage imposed on us by the sexagenarian John Dramani Mahama.