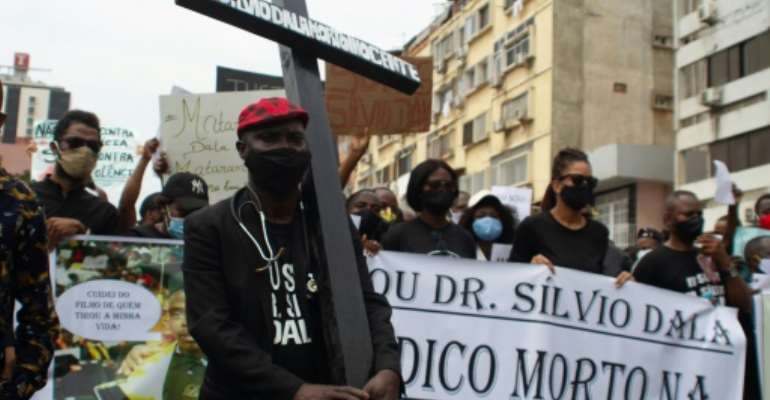 Police claim Silvio Dala, 35, suffered a heart attack after he was arrested for driving without a face mask on September 1. By Osvaldo Silva (AFP)

Hundreds marched in Angola's capital Luanda on Saturday to protest against police brutality after a doctor caught breaching anti-coronavirus rules died in custody.

Police claim Silvio Dala, 35, suffered a heart attack after he was arrested for driving without a face mask on September 1.

But questions were raised after Dala's body was sent to the morgue covered in blood with scarring to his head.

The doctor is believed to be the latest victim of security forces violently enforcing lockdown rules in the impoverished southwest African country.

At least seven young men were shot dead by police and army officers between May and July, according to Amnesty International.

Hundreds of demonstrators chanted and waved face masks over their heads.

Many wore black t-shirts with slogans such as "we want justice" and "don't kill us, the people need us".

They marched through the city centre and hung fake blood-stained medical clothes in front of the doctor's association.

There were calls for Interior Minister Eugenio Laborinho to step down and for government to implement police reforms.

Protesting doctor Rodrigo Joao deplored the death of a fellow healthcare professional who could have "served the nation for many years".

"We need to draw attention to this mistake and correct it so that a citizen will not lose his life next time," Joao told AFP, denouncing the officers' lack of "humanity".

Police at the scene allowed protesters to demonstrate peacefully and no clashes occurred.

At the end of the march, doctors' union president Adriano Manuel reiterated calls for clarity around the circumstances of Dala's death.

"We will pursue our mission," Manuel vowed as he addressed the crowd.

"We will bring (the case) to court next week because we have concrete proof that our colleague did not die of a heart attack."

Angola's government imposed restrictions in March to help curb the spread of coronavirus, with soldiers deployed to help police implement the new rules.

But people have continued to mass at markets and water points -- breaching curfews and gathering bans.

For many, poverty and lack of access to basic services outweighs concerns about catching coronavirus, which has infected over 3,200 people and killed at least 131 to date.