You Are Important With Or Without Awards 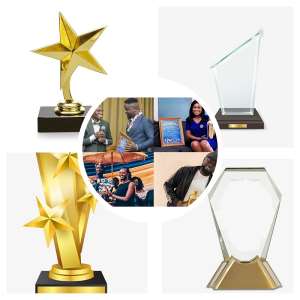 We live in a society where awards have become the attachment symbols and special delicacies for people. It can be likened to the fact that not receiving awards is just like depriving some people the oxygen they need to function and exist. It is nice to win awards but we need to keep moving forward since recognition of function always precedes recognition of being.

Interestingly, I have monitored events surrounding the administering of Global Blueprint Excellence Awards to many Ghanaian personalities and celebrities including Sarkodie, Nathaniel Attoh, Berla Mundi, Chairman Wontumi, John Boadu, Captain Smart, Professor Ebenezer Oduro Owusu of the University among others.

It is understood that a certain Dr. Kwame Owusu Fordjour is the brain behind the fake Award scheme alleged to be in collaboration with the United Nations and Kofi Annan. The awardees have suffered a terrible blow. They're shocked, quiet and pensive. They're being trolled by netizens.

I'm not writing in an attempt to laugh about what happened to those who were scammed with the fake award and recognition recently. This is because, at the heart of the human condition is a need to feel important and it could have happened to any of us. We can all be victims of flattery, sycophancy and fake awards without proper self-awareness and self-control. Even the best of us can be scammed into receiving fake awards, especially when the scammers are brilliant enough to slam a global iconic brand like Kofi Annan on these awards.

In point of fact, whether fake awards are administered as a part of personal vendetta, or for pecuniary gain, we must attempt to tackle the delusions of grandeur that most people in our climes easily fall prey to by integrating mental health studies into the fabric of our educational curricula straight out of the chute.

It is easy to feel validated by awards, recognition and the likes. It tends to become something we long for to constantly elevate our egos and this is the danger. Cunning fellows are now feeding on an apparent weakness ; the insatiable thirst for awards to swindle people of money.

In my opinion, this starts so early in life in schools or growing up. Some kids are given awards and others are not. The issue is this; in the hearts of some who are not awarded, especially those with inferiority and unsecurity complex grow up with a mentality like 'I will prove to them that I am also important'. This desire for honor, which isn't bad in itself, tends to become a tool of enslavement because it wasn't birthed from a desire to be excellent, but a desire to rub shoulders with others.

I hope you now comprehend why some leaders or people of repute are often destroyed or harmed by 'sycophancy'? The strong desire to feel honored, eulogized and celebrated is deeply rooted in the heart of a human being. This is a good thing but the moment it becomes uncontrollable, it becomes a peculiar mental health issue; more like a weapon of mass destruction.

I know that in attempting to offer a panacea for this will be an exercise in futility. However, I am willing to test its feasibility :

(I) Parents must make their children believe and have confidence in themselves. Teachers must make their pupils believe in their capabilities. The rare talents and gifts of a person should be given due recognition as much as possible so that they do not feel unsecure or 'unspecial' early in life.

(II) The institution and duplication of award schemes, especially national ones must be strictly regulated by an authority. Today, in Ghana alone, I can count countless (pun intended) number of awards that attempt to celebrate people in a particular category. I don't want to start citing examples lest I deal a blow to people's cash cow since they're full-blown businesses.

(III) The media, which is the mirror of every society; the agency that shapes thoughts and engenders socialization, must give little credence to awards and award schemes. Languages like "Award-winning", "Multiple award-winning", and the likes are instilling high expectations on people. It’s as though without that preceding your identity, you are nobody! It isn't right.

Today, I know many people who have earned PhDs the hard-way, through academic sweat and toil who rarely use the title Doctor / Dr. But then, some people with honorary doctorate degrees can get angry when you make reference to them without the title. Lemme ask, is this not a mental health issue?

I know I sound really idealistic in all of this, because the real world shows that awards, recognition and the likes will continue to be subjective and a subject of contention everywhere! Almost always, after every award or recognition is given, there're people who are happy and others who are sad. It even happens with global awards like the Ballon D'or, Grammys, Nobel Peace Prize, etc.

Now, let me be real. This will continue to be a problem. The quest for recognition, celebration and honor will continue to remain a trigger for mental health issues. People will go all lengths to obtain awards, including drawing weapons, getting swindled by '419' awards and creating multiple award schemes just to feed their egos.

On this note, if you are lucky to have a friend who is doing well, appreciate him or her. If you know people who are deserving of honor, recognize them. If you notice someone who has an uncanny desire for grandeur, counsel them and most importantly, let us celebrate excellence and give little credence to titles, certificates, awards among others.

I believe that you are also somebody, award or no award, you are special to someone or some people. Don't allow societal expectations and definition of success transmogrify your entire being. Even regardless of how you feel inside, always try to look like a winner. Even if you’re behind, a sustained look of control and confidence can give you a mental edge that results in victory. Eschew comparison by knowing you, doing you and being you. Let's be interested in raising our act and staying alongside the best of the world. Thanks for reading this piece.