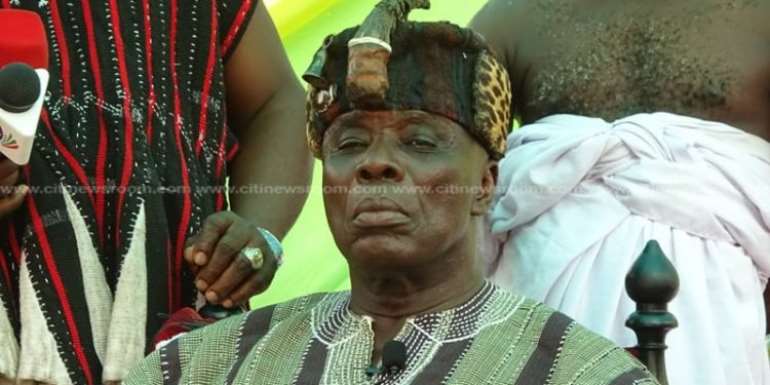 Okyenhene, Osagyefuo Amoatia Ofori Panin has denied claims of his involvement in the recent land boundary dispute at Dome Faase in the Obom Domeabra constituency.

The Secretary of the Akyem Abuakwa State, Daniel Ofori Atta clarified this on behalf of the Okyenhene in a Citi News interview.

He noted that, one of the key figures in the dispute, Bafour Sarpong Kumankuma said to be the Mponuahene of Akyem Apedwa has not been commissioned by Okyenhene to draw a boundary between the Akyem Abuakwa and the Ga States.

“The man who is said to have hired those hoodlums to cause mayhem was not sent to Dome Faase by the Okyenhene. We do not recognise him as chief within the Akyem Abuakwa traditional establishment. He has no authority to invade the township of Dome Faase.”

“We are denying completely the assertion that Bafour Sarpong Kumankuma was dispatched to Dome Faase to draw a boundary between Akyem Abuakwa and the Ga State. We do not want any incident where the relationship between the Ga state and Akyem Abuakwa will be marred by this single incident,” he said.

The coalition of Ga communities had alleged that the Mponuahene of Akyem Apadwa and the Akyem Traditional Council in the Eastern Region were taking their farmlands from them hence the resistance that led to chaos on August 25, 2020.

Hundreds of fear-stricken residents subsequently fled after claiming they were being harassed by military officers.

Over one hundred residents who were arrested by the military over the dispute were later released after a request by the elders of the community. Below is full statement from the office of Okyenhene

It has become necessary and of immediate concern to react to news reports that a certain Bafour Sarpong Kumankuma purporting to be Mponuahene of Akyem Apedwa has attributed his unlawful conduct with regards to the invasion of Dome Faase to the Okyenhene Osagyefuo Amoatia Ofori Panin.

The news as reported by several media outlets represents a grave assault on the dignity of the Ofori Panin Stool.

On Tuesday 25th August, 2020, Bafour Sarpong Kumankuma with the assistance of thugs and hoodlums provoked an unneeded social conflict by unlawfully invading the village of Dome Faase in the Obom- Domeabra Constituency.

The Dome Faase incident has not the knowledge and or acceptance of His Majesty Osagyefuo Amoatia Ofori Panin.

We wish to state unequivocally, that Bafour Sarpong Kumankuma is not the Mponuahene of Akyem Abuakwa. He is not recognized and accepted as a Chief or a holder of any traditional authority in Akyem Abuakwa.

He acted as land guard in furtherance of his illicit and criminal profession related to unlawful sand winning, unauthorised sale of lands and violation of the order and enforcement of the public policy which has been his hall mark. He has time without number disrespected summons to appear before the Kyebi Executive Council to answer queries regarding his nefarious activities.

This point is to the effect that the Osagyefuo dissociates himself from the criminal incident at Dome Faase. Further to this, it must be made clear that there is no authorized associative responsibility to the person of the Okyenhene.

What is of immediate concern to the Ofori Panin Fie, is the resultant effect to disturb the immemorial unity and historic solidarity of Akyem Abuakwa and the Ga State. The Okyenhene wishes to assure the people of Dome Faase and the Ga State of his commitment to peaceful co-existence and harmony which has characterized the relationship between Okyeman and the Ga State.

Further to this point, I am directed to call on the Inspector General of the Ghana Police Service to order for the immediate arrest and prosecution of the perpetrators.

CC: THE INSPECTOR GENERAL OF POLICE