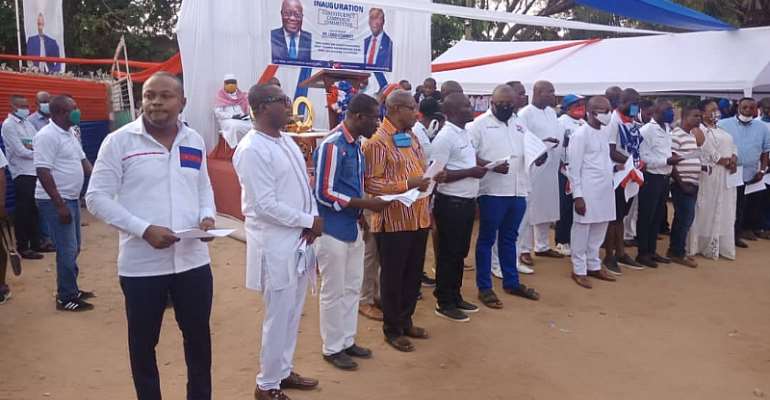 The Ablekuma South constituency of the New Patriotic Party (NPP) has inaugurated a 47 member campaign team.

This was to spearhead the campaign activities for the 2020 Presidential and Parliamentary Elections in December.

The inauguration which was on the theme "Repositioning to Recapture" took place at the Mamprobi Neighborhood Centre in Accra on Sunday, 30th August 2020 and attracted sympathizers and supporters of the ruling party.

The team co-chaired by the Parliamentary Candidate of the party, Hon. Bernard Nii Anyaa Brown popularly known as "Shiatse '' shared his objectives in ensuring that the party wins the seat from the National Democratic Congress (NDC) and retains Nana Addo in power.

Mr. Adu Mantey, a former Member of Parliament for the Korley Klottey constituency, who inaugurated the team urged them to execute their duties efficiently in order to win the seat from the NDC.

The National Secretary of the party, Mr. John Boadu urged all the executives to work hand in hand with all members in order to achieve the set target.

He also presented a brand new pick up van to the Parliamentary Candidate as well as 10,000 cedis the team in addition.

Dr. Lord Oblitey Commey, The Director Of Operations at the Presidency, advised the team and the constituents to deter from the politics of insults but rather focus on the progress and policies of the NPP government.

The CEO of Coastal Development Authority (CODA), Hon. Jerry Ahmed in his speech tasked the members to adopt door to door campaign strategies in order to unseat the incompetence NDC.

Hon. Ahmed, as part of the inauguration program, presented a cash worth 20,000 cedis to the team in order to aid their activities.

In addition, the former 1st Vice Chairman of the Constituency, Mr. Henry Nii Lantey Plange (Okusie) also presented a cheque of 2000 cedis to the team.

Aside the inauguration of the constituency executives, campaign teams of the various electoral areas were also unveiled.