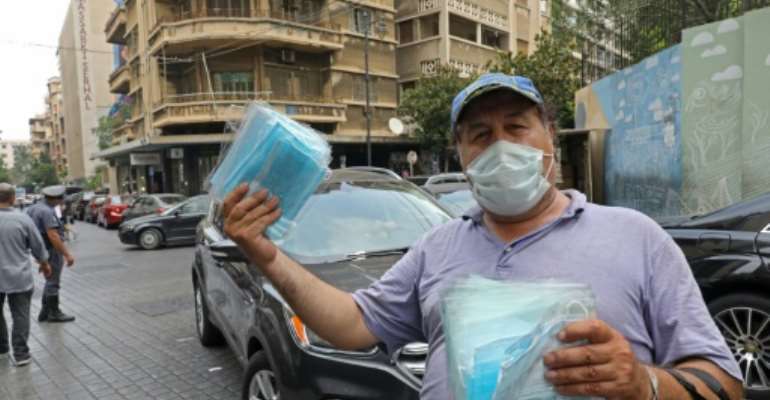 Lebanon's new lockdown measures include a nighttime curfew and a ban on social gatherings. By ANWAR AMRO (AFP/File)

Lebanon was set for a new lockdown Friday after a spike in coronavirus infections while in the United States Joe Biden vowed to act "on day one" of his presidency to battle the pandemic that has killed 170,000 Americans.

Record numbers of cases in recent weeks have piled pressure on Lebanon's health services which are also struggling to cope with thousands injured by a deadly blast at Beirut's port.

The two week closure adds to the woes of a country that was in dire economic crisis even before the coronavirus and the massive August 4 explosion which killed 181 people and left thousands homeless.

"What now? On top of this disaster, a coronavirus catastrophe?" said 55-year-old Roxane Moukarzel in Beirut.

"Economically closing up the country is not good, as people want to sell, but let them lose out a little instead of getting sick and having to be carted off to hospital," said the mother of one, who trained as an architect.

Graphic showing the highest national death tolls around the world since the start of the coronavirus crisis.. By John SAEKI (AFP)

Authorities fear Lebanon's fragile health sector would struggle to cope with a further spike in COVID-19 cases, especially after some hospitals near the port were damaged in the explosion.

They have said the new lockdown measures, which include a nighttime curfew from 6:00 pm to 6:00 am, will not affect the clean-up or aid effort in areas ravaged by the blast.

Lebanon's stay-at-home order from Friday is only the latest such decision after a months-long lockdown from mid-March which exacerbated the economic crisis.

"There's no work. People have no more money. They have nothing to eat," said carpenter Qassem Jaber, determined to keep his business open to help people rebuild their homes in Beirut.

'We lead the world in deaths'

Economies around the globe have been ravaged by the pandemic which has infected more than 22 million and killed nearly 800,000 since the new coronavirus emerged in central China late last year.

The United States has borne the brunt in health terms and is suffering grim economic fallout, with another 1.1 million making new claims for unemployment benefits last week.

Accepting the Democratic nomination for the US presidential election, Biden on Thursday said he would implement a national plan to fight the pandemic on his first day in office if elected in November.

Joe Biden vowed to battle the pandemic from 'day one' in office if he wins the US presidential election. By Olivier DOULIERY (AFP)

"We lead the world in deaths," he said.

"If I'm your president, on day one we'll implement the national strategy I've been laying out since March," he said, adding that President Donald Trump's failure to protect more Americans from the virus was "unforgivable."

"We'll take the muzzle off our experts so the public gets the information they need and deserve -- honest, unvarnished truth," he added.

In further evidence of the economic toll, Britain on Friday said its government debt had passed £2.0 trillion (US$2.6 trillion) for the first time following large state borrowing as the pandemic pushed the economy deep into recession.

Europe has seen worrying spikes in infections this week but health authorities said it should be able to ride out the surge in new cases without reimposing full lockdowns.

The jump in cases reported Thursday in France, Italy, Spain and Germany showed the pandemic was rebounding across the continent -- often due to travel, summer holidays and parties.

Tourists wearing face masks walk by the Trevi fountain in Rome. Italy, France, Spain and Germany have seen a spike in virus cases as the pandemic rebounds across Europe -- often due to travel, summer holidays and parties. By Vincenzo PINTO (AFP/File)

Despite the rise in cases, a top World Health Organization official said additional lockdowns should not be necessary.

"With the basic nationwide and additional targeted measures, we are in a much better position to stamp out these localised virus flare-ups," the head of the WHO's European branch, Hans Kluge, told reporters.

"We can manage the virus and keep the economy running and an education system in operation," he added.

World Bank President David Malpass warned Thursday that the virus may have driven as many as 100 million people back into extreme poverty.

While governments have been injecting massive financial support to help their economies, finding a vaccine is seen as crucial to controlling the pandemic.

Several drugs are approaching the mass-testing phase, and countries around the world have been pre-ordering many millions of doses.