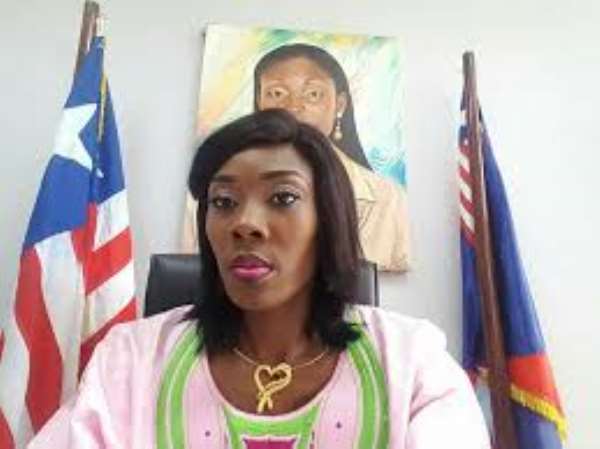 As excerpt of Audrey Assad’s song “It is well with my soul” wasawas being played the start of an interview on the “Ovation Magazine Breaking” with former Nigerian Presidential candidate and Publisher of Ovation International Magazine, Chief Dele Momodu, Liberia’s First female Vice President Chief Dr. Jewel Howard Taylor took several deep breaths and released sighs as she struggled to restrain her emotion for the death of Liberia’s youngest female to be elected to the National Legislature Munah Pelham Youngblood. The deceased was Representative of Montserrado County Electoral District #9 on the ticket of the ruling Coalition for Democratic Change (CDC).

With repeated sighs, Chief Dr. Howard Taylor said the passing of young Liberian female lawmaker is a serious hit to the struggle for gender equality and women empowerment in Liberia. “Munah was bold. She always took a stand on national issues and would provide analytical insights into issues in defense of her position. Unlike the regular politicians who would shift their position on a particular issue, Munah Pelham would stick to her stance,” the Liberian Vice President said.

“Munah touched many lives and everyone is in awe of her passing. She was the youngest female ever to be elected. Everywhere she went, she was a star. She was very outspoken on issues. She believed in women being heard at the decision-making table. She was a strong voice for gender equity that we [women] have been clamoring for over the years,” VP Howard Taylor recounted.

She said it would interest everyone to know that Munah Pelham was so interested in filling the void of low women representation at the national legislature and she was considering a decision to contest for the Montserrado County senatorial seat giving the fact that Liberia has one female senator. “Munah was also interested in ensuring more women are considered to contest on the ruling CDC ticket in the upcoming December 8 midterm senatorial election.

The late lawmaker’s WhatsApp message a few days before her passing:

I will like to inform you that I have an interest in contesting in the upcoming Senatorial election come December 2020.

One Party, one Nation.

I feel it is unfair to the women of the coalition for all 15 seats in the midterm election to have no female from the ruling party.

The County must be gender balance.

To God be all the glory. Let God be God.

Just an update on my activities.”

For his part, former Nigerian Presidential candidate and Chief Executive Officer of Ovation Magazine, Chief Dele Momodu said he met Munah Pelham in Nigeria during the heyday of the war in Liberia when she was seeking refuge. He said Munah Pelham pulled herself by the bootstraps to become a supermodel in Nigeria who performed at many events. “She was a daughter to me, Chief Dr. Momodu said.

The Ovation Special Live Instagram platform is hosted by Chief Momodu and brings on prominent individuals from across Africa to discuss critical issues that affect their respective countries and the continent.

‘Sputnik-V procurement contract must be re-examined’ – Kwaku...
34 minutes ago

Getting Sputnik-V vaccines from black market using middlemen...
34 minutes ago