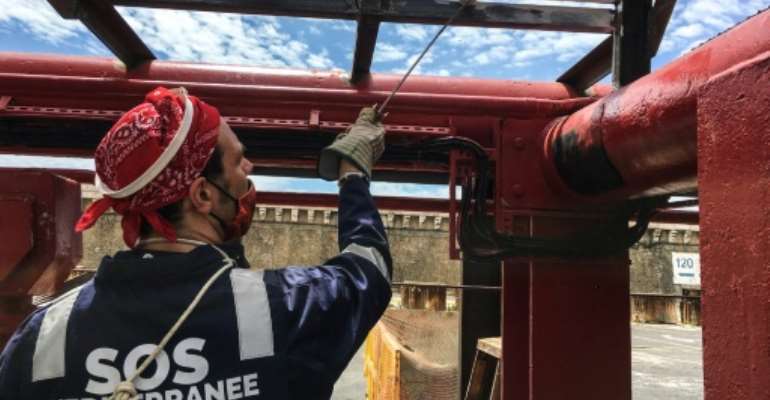 A crew member of French NGO SOS Mediterranee rescue boat Ocean Viking paints parts of the boat moored in the port of Marseille, on the eve of a scheduled departure for a migrants search and rescue mission off the coast of Libya. By Shahzad ABDUL (AFP)

The blazing heat of the sun hitting the Mediterranean Sea makes it an exhausting task to pull stranded migrants on to rescue ships.

But the new heavy equipment the rescue activists have to wear in the 35 degrees Celsius (95 degrees Fahrenheit) heat to limit the risk of contagion from the coronavirus takes the exertion to a whole new level.

The Ocean Viking rescue ship -- charted by French aid group SOS-Mediterranee -- has been heading through the waters towards Libya since Monday in its first mission since a three-month suspension during the health crisis.

On the way, the crew rehearse operations under COVID-19 protection measures.

Aid worker Ludovic is slumped in a corner of the ship's orange inflatable speedboat, panting. He has just pulled Oscar the dummy on board, given him CPR for three minutes, all while wearing a helmet, a visor and a respirator-style face mask. 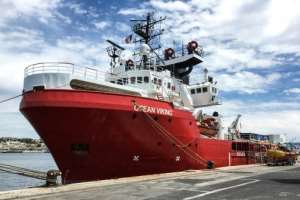 The Ocean Viking rescue ship -- charted by French aid group SOS-Mediterranee -- has been heading through the waters towards Libya in its first mission since a three-month suspension during the health crisis. By Shahzad ABDUL (AFP)

"It's horrendous," he said, mask now dangling on one ear. "I'm sorry, but I can't breathe!"

"It's going to be a lot harder than previously expected," said fellow rescuer Mary, who also had to stop for a breather and drink some water during the two-hour exercise.

"What we can do is swap between the rescuers more often and take it in turns to do the CPR," said the British 23-year-old, who began working SOS-Mediterranee at just 19.

"Because sometimes we're doing CPR for a really long time on the ribs before we get back to the Ocean Viking.

"It's not possible for one person to be going for a very long time with this mask on the face."

Even experienced rescue workers need to be mentally prepared to suffer, said the head of onboard operations Nicholas Romaniuk, "because you quickly get out of breath with all the equipment on". 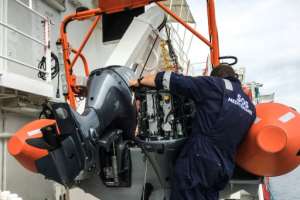 More than 100,000 migrants tried to cross the Mediterranean in 2019 with more than 1,200 dying in the attempt, according to the UN's International Organization for Migration. By Shahzad ABDUL (AFP)

"We already have heavy equipment, with security boots, a huge life jacket and it's so hot," Romaniuk said.

"We're trying to do two contradictory things -- respect safety measures regarding the coronavirus but also limit stress for the rescuers who are already under maximum pressure."

If a rescuer is hyperventilating, the most important thing is that he gets better, even if it means taking off the mask, said Romaniuk.

"You can't save anyone if you're not in a good way," he said.

With their faces fully obscured, Romaniuk is worried that the rescuers might be taken for Libyan coastguards by the migrants at sea, which might provoke panic as the coastguards take them back to the war-torn country and often detain them.

"Put yourself in their shoes, they're going to see us arriving with helmets, masks, visors... I might actually take off my helmet, so that they can see that I don't look Libyan," said the Swiss rescuer.

More than 100,000 migrants tried to cross the Mediterranean last year with more than 1,200 dying in the attempt, according to the UN's International Organization for Migration.