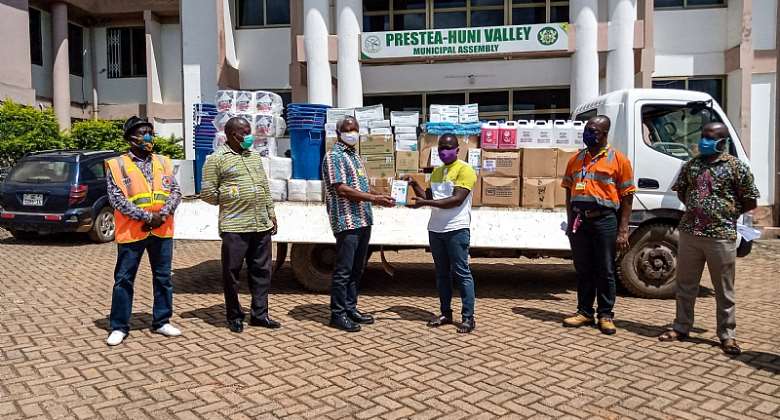 GSBPL Officials handing over the items to the Health Directorate.

The Finance and Administration Manager for Golden Star Bogoso Prestea Limited (GSBPL) has cautioned those who have started stigmatizing against those who have recovered from Covid-19 to desist from such behaviour since nobody is immune to the pandemic.

Mr. Rodney Oddoye stated that, in as much as Ghanaians keep praying for those who are sick to be treated and discharged, all must accept them back into the same society they left.

“Undoubtedly, every person irrespective of the class or level is a potential victim of a carrier of the disease and therefore in as much as we empathize with those already infected with the virus, we must also do well to accept them when they are declared fully treated and recovered from the disease by appropriate Ghana Health Service facility, devoid of any form of stigmatization,” he noted.

Mr. Odoye made this statement on, Friday May 15 when his outfit was donating Personal Protective Equipment (PPE) to the Prestea Huni – Valley Municipal Health Directorate to fight Covid-19 in Golden Star Resources’ operational areas.

In his short speech, he expressed that GSBPL sees the host communities as major stakeholders in the company’s operations therefore “we deem it timely and appropriate in the wake of this coronavirus pandemic situation to galvanize all these resources to support the fight against the disease.”

The Finance and Administration Manager further disclosed the company’s plans, which were far advanced to roll out rigorous media (traditional media and information centres) campaign targeted at the host communities on the do’s and don’ts as well as stigmatisation.

The items included 179 boxes of disposable hand gloves, 62 boxes of N95 nose masks, 9 thermometer flash, 10 boxes of googles, 10 boxes of hair cap, 72 shoe covers, 56 gallons of hand sanitizer and 63 gallons of liquid soap – they were to be distributed to health facilities across the municipality

Expressing happiness at the support GSBPL has provided them, the Prestea Huni- Valley Municipal Health Directorate Mr. Emmanuel Kofi Tamakloe shot down the argument by a section of the public, to show images of those who have been infected for them to believe the disease is real in Ghana.

Speaking bluntly just some few minutes after receiving a call to be told that his jurisdiction had recorded another two cases bringing the total number to four, he quizzed “would you be happy if your picture is put in public and be identified as a Covid-19 patient? If not why do you then want that to be done to your friend for you to believe the disease is real?"

Mr. Tamakloe was hopeful that if citizens would stick to the preventive measures – regular handwashing with soap under running water, use of alcohol based hand sanitizer and wearing of nose mask when stepping out, the municipality would be able to contain the disease.

On his part, the National Disaster Management Organization (NADMO) Director for the Municipality Francis Abeiku Yankah, also thanked Golden star for providing the items and other facilities to help the government fight the pandemic.