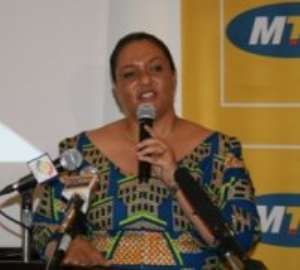 Ms Hannah Tetteh, Minister of Trade and Industry, on Monday launched 'Lift Your Game TV show', in Accra. The TV show aims at sharpening the entrepreneurial skills and creating jobs and wealth for Ghanaians.

She commended producers of the TV reality show and expressed the hope that many Ghanaians especially the youth would learn from the experiences of participants in the show so as to establish and grow their own businesses from a small beginning.

“You cannot get to the top of a tower without having climbed a few steep stairs,” Ms Tetteh said that the youths must learn from the many famous successful individuals who had made it in life through hard work, discipline and modesty.

Ms Hannah Tettehv also said that government was taking steps to restructure the National Board for Small-Scale Business Industries, to inject efficiency in the operations of the corporate entity. She said the efforts were aimed at offering assistance to entrepreneurs to grow their businesses.

The show which was produced by Awesome Ventures Limited (AVL), producers of the popular TV3 “Masem” show, was sponsored by MTN, communications service provider.

The 13-week TV programme, also co-supported by Private Enterprise Foundation (PEF) and Business Development Services (BDS) Fund, a fund under Micro Small and Medium Enterprise Project, of the Ministry of Trade and Industry), was expected to showcase the best of Ghanaian entrepreneurial talents to a wider audience including a 3-week enterprise growth training workshop for participants.

Mr Leslie Boafo, the Training Manager of AVL, said a grand seminar would be held for some 500 selected participants who have been in business for at least a year, after which they would be asked to produce an attractive business plan for sponsorship.

Mr Boafo said “The 15 participants would be selected by a panel of entrepreneurs on the basis of proposals submitted at the end of the 3 week training workshop and presented with cash and other prizes”.

He expressed the hope that the show would inspire at least 50,000 Ghanaians to learn how to start and grow their own businesses through best practices.

Dr Osei Boeh-Ocansey, Director General of PEF, underscored contributions made by SMEs in the national economy and added that it had contributed to the decline of poverty levels the country had seen over the years.

Mr Alexis Aning, Manager of BDS Fund observed support given in the form of access to loans from banks contributed towards helping  Small and Medium Scale Enterprises (SMEs) sustain their business.

Mr Torgbor Mensah, Chairman of the Argon Group, a private Ghanaian business group, said the country was blessed with dedicated and hardworking citizens but they lacked prudent business direction to enable them to create wealth.

He said with the little direction and training many potential entrepreneurs could be catapulted onto the international stage and compete with the other businesses.

Mr Mensah expressed the hope that the TV reality show would engender in Ghanaians the spirit of entrepreneurship, which according to him, was necessary for Ghana's socio-economic development.