How formula could increase breast-feeding rates 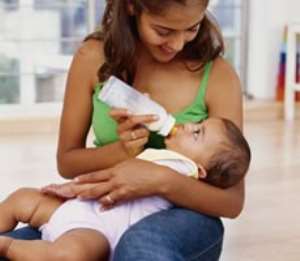 One of the surprising ways to boost breast-feeding rates among new moms may involve formula, according to the latest research.

With a growing body of evidence supporting the benefits of breast-feeding for both mom and baby, public health experts celebrate each time a hospital receives "Baby-Friendly" status, which indicates the facility endorses steps that encourage breast-feeding such as not separating moms and babies after delivery and offering formula only if it's deemed medically necessary.

But a small study published in the journal Pediatrics suggests that giving newborns a little bit of formula actually helps boost breast-feeding rates. The formula primer may give moms the assurance they need to keep pursuing breast-feeding, say the study's authors.

Not surprisingly, many breast-feeding experts are taking issue with the findings, worried the results may undermine public health messages that breast milk alone is best for babies.

The study, from University of California, San Francisco (UCSF), followed 40 newborn babies who had lost at least 5% of their birth weight by the time they were 36 hours old. The American Academy of Pediatrics (AAP) notes that weight loss in an infant's first days is typical as they become accustomed to feeding; average weight loss is about 7%.

But lead author Dr. Valerie Flaherman, an assistant professor of pediatrics and epidemiology and biostatistics at UCSF, focused on this group since other data suggests that infants who lose this much are more likely to lose more weight; when babies drop 10% of their birth weight, pediatricians become concerned that the infants may be at risk of other health problems.

For the trial, Flaherman and her colleagues assigned half the babies a couple days of birth to receive two teaspoons of formula after each breast-feeding, via a syringe so as not to encourage "nipple confusion" in which a baby has trouble transitioning between breast and bottle. Mothers were instructed to discontinue the formula supplementation once their milk supply appeared, which generally takes two to five days. The other half were exclusively breast-fed unless the doctor ordered formula.

TIME.com: Breast-milk donors come to the rescue of a new mom with breast cancer

Though it might seem counterintuitive, Flaherman suspects that introducing a small amount of formula early on, then withdrawing it, helped moms feel secure that their babies weren't hungry and losing weight in their first days of life. That likely gave them confidence to go on breast-feeding exclusively.

"Using that little bit of formula earlier really seems to have had a big effect on whether babies are getting formula at one week," she says. "We wanted to try to find an early intervention we could do with these babies and moms to help them continue breast-feeding. I was surprised the effect was this big."

In the U.S., most moms start off breast-feeding, but only 40% are still doing so at six months and just 20% make it to one year, which is the milestone that the AAP recommends at a minimum.

Not everyone is convinced that using formula in this way, however briefly, is going to increase that percentage.

"This study goes against everything that's been published for several years now from very reliable clinicians and researchers about the potential hazards of supplementing exclusively breast-feeding babies with formula," says Dr. Kathleen Marinelli, an associate professor of pediatrics at the University of Connecticut School of Medicine and the chair-elect of the U.S. Breastfeeding Committee.

"They're flying in the face of years of research here and doing so rather glibly, stating that this is the new way to look at things."

Tanya Lieberman, a lactation consultant who writes about scientific research for breast-feeding advocacy organization Best for Babes, says she's "a little confused" by the results. "We know what works to increase breast-feeding exclusivity and duration and we've known it for 20 years. That includes no supplementation unless medically necessary."

Lieberman says that the findings may have been affected by the attitude of the women themselves, who said they wanted to exclusively breast-feed but were also open to using formula. Mothers may also be under some misperceptions about how much milk newborns need. "Babies don't need large volumes of milk in the first few days," she says. "They are fine until their mother's milk comes in."

Flaherman says the study's results are not necessarily applicable to all babies. "This isn't something we think all people should do," she says. "It is just a potential tool for moms to consider using if they think it might be helpful."

She also says that the ultimate goal of the study was to find a way to help more mothers breast-feed, and to do so for as long as possible to help their babies. "It's kind of crazy that only 20% of people reach the recommended duration of breast-feeding," says Flaherman. "Different approaches to supporting breast-feeding may work better for different people." And for some mothers, that may even include a little bit of formula.