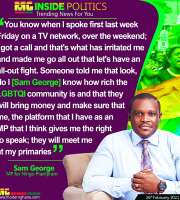 Division of Labor by Gender. Gender division varies across different ethnic groups. Among the Akan, women assume the basic domestic and childcare roles. Both genders assume responsibility for basic agriculture production, although men undertake the more laborious tasks and women the more repetitive ones. Women will work on their husbands' farms but will also farm on their own. Traditional craft production is divided according to gender. Men are weavers, carvers, and metalworkers. Women make pottery and engage in food processing. Petty trade, which is a pervasive economic activity, is almost exclusively a woman's occupation. Women independently control any money that they receive from their own endeavors, even though their husbands normally provide the capital funding. Wives, however, assume the main work and financial responsibility for feeding their husbands and children and for other child-care expenses.

Akan women also assume important social, political, and ritual roles. Within the lineage and extended family, female elders assume authority, predominantly over other women. The oldest women are considered to be the ablest advisers and the repositories of family histories.

Among the Ga and Adangme, women are similarly responsible for domestic chores. They do not do any farmwork, however, and are heavily engaged in petty trade. Ga women are especially prominent traders as they control a major portion of the domestic fish industry and the general wholesale trade for Accra, a Ga homeland. Northern and Ewe women, on the other hand, have fewer commercial opportunities and assume heavier agricultural responsibilities in addition to their housekeeping chores.

The Relative Status of Women and Men. In traditional society, women had considerable economic and political powers which derived in part from their ability to control their own income and property without male oversight. Among the matrilineal Akan they also regularly assumed high statuses within the lineage and the kingdom, even though their authority was often confined to women's affairs. Colonialism and modernization has changed women's position in complex ways. Women have retained and expanded their trading opportunities and can sometimes acquire great wealth through their businesses. Men have received wider educational opportunities, however, and are better represented in government and formal sector employment. A modest women's movement has developed to address gender differences and advance women's causes.