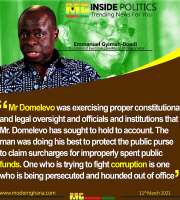 THE ARTS AND THE HUMANITIES

Support for the Arts. The arts are primarily self supporting, but there are some avenues of government financing and sponsorship. The publically funded University of Ghana, through the Institute for African Studies, provides a training ground for artists, especially in traditional music and dance, and hosts an annual series of public performances. The government also regularly hosts pan-African arts festivals, such as PANAFEST, and sends Ghanaian artists and performers to similar celebrations in other African countries.

Literature. While there is a small body of written literature in indigenous languages, Ghanaians maintain a rich oral tradition, both through glorification of past chiefs and folktales enjoyed by popular audiences. Kwaku Ananse, the spider, is an especially well-known folk character, and his clever and sometimes self-defeating exploits have been sources of delight across generations. Literature in English is well developed and at least three authors, Ayi Kwei Armah, and Efua Sutherland, and Ama Ata Aiddo, have reached international audiences.

Graphic Arts. Ghana is known for a rich tradition of graphic arts. Wood carving is perhaps the most important. The focus of the craft is on the production of stools that are carved whole from large logs to assume the form of abstract designs or animals. These motifs generally represent proverbial sayings. The stools are not merely mundane items, but become the repositories of the souls of their owners after death and objects of family veneration. Carving is also applied to the production of staves of traditional office, drums, dolls, and game boards. Sculpting in metal is also important and bronze and iron casting techniques are used to produce gold weights and ceremonial swords. Ghanaians do not make or use masks, but there are some funerary effigies in clay. Pottery is otherwise devoted to producing simple domestic items. Textiles are well developed, especially handwoven kente, and stamped adinkra cloths.

Most of the traditional crafts involve artists who work according to standardized motifs to produce practical or ceremonial items. Purely aesthetic art is a modern development and there is only a small community of sculptors and painters who follow Western models of artistic production.

Performance Arts. Most performances occur in the context of traditional religious and political rites, which involve intricate drumming and dancing. While these are organized by trained performers, a strong emphasis on audience participation prevails. Modern developments have encouraged the formation of professional troupes, who perform on public occasions, at international festivals, and in theaters and hotel lounges. The University of Ghana houses the Ghana Dance Ensemble, a national institution with an international reputation. More popular modern forms focus on high life music, a samba-like dance style, which is played in most urban nightclubs.