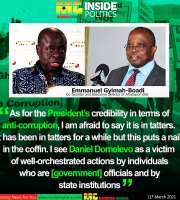 Ghana has a modern medical system funded and administered by the government with some participation by church groups, international agencies, and NGOs. Facilities are scarce and are predominantly located in the cities and large towns. Some dispensaries staffed by nurses or pharmacists have been established in rural areas and have been effective in treating common diseases such as malaria.

Traditional medicine and medical practitioners remain important because of the dearth of public facilities and the tendency for Ghanaians to patronize indigenous and modern systems simultaneously. Customary treatments for disease focus equally on supernatural causes, the psychosociological environment, and medicinal plants. Abosom priests and priestesses deal with illness through prayer, sacrifice, divination, and herbal cures. Keepers of fetish shrines focus more heavily on magical charms and herbs, which are cultivated in a garden adjoining the god's inclosure. More secularly oriented herbalists focus primarily on medicinal plants that they grow, gather from the forest, or purchase in the marketplace. Some members of this profession specialize in a narrow range of conditions, for example, bonesetters, who make casts and medicines for broken limbs.

Some interconnections between the modern and traditional systems have developed. Western trained doctors generally adopt a preference for injections in response to the local belief that medicines for the most serious diseases must be introduced into the blood. They have also been investigating the possible curative efficacy of indigenous herbs, and several projects for developing new drugs from these sources have been initiated.