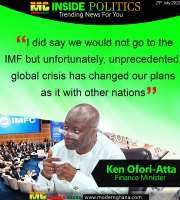 History of the Ashanti People

Asante (Ashanti) History Much of the modern nation of Ghana was dominated from the late 17th through the late 19th century by a state known as Asante. Asante was the largest and most powerful of a series of states formed in the forest region of southern Ghana by people known as the Akan. Among the factors leading the Akan to form states, perhaps the most important was that they were rich in gold.

In the 15th and 16th centuries, gold-seeking traders came to Akan country not only from the great Songhay empire (in the modern Republic of Mali) and the Hausa cities of northern Nigeria, but also from Europe. After the Portuguese built the first European fort in tropical Africa at El Mina in 1482, the stretch of the Atlantic coast now in Ghana

became known in Europe as the Gold Coast. Akan entrepreneurs used gold to purchase slaves from both African and European traders. Indeed, while Europeans would eventually ship at least twelve million slaves to the Americas (the estimates vary between 20 - 40 million people who were sent to the Americas as slaves from West Africa by European slave traders), they initially became involved in slave trading by selling African slaves to African purchasers. The Portuguese supplied perhaps 12,000 slaves to Akan country between 1500 and 1535, and continued selling slaves from Sao Tome and
Nigeria to the Gold Coast throughout the 16th century. Before Benin imposed a ban on slave exports, a Portuguese slave trader reported that at Benin they purchased, "a great number of slaves who were bartered very profitably at El Mina. The labour of these slaves enabled the Akan to expand gold production by developing deep-level mining in addition to panning alluvial soils. Even more importantly, slave labor enabled the Akan to undertake the immensely laborious task of clearing the dense forests of southern Ghana for farming. The most prominent historian of Asante, Ivor Wilks, suggests that while some farming on a very limited scale had probably been practiced in the Ghanaian forests for millennia, only when the Akan began importing slaves in the 15th and 16th centuries were they able to shift from an economy which relied primarily on hunting and gathering to one which became primarily agricultural. As this transition to agriculture took place, Akan communities not only planted more of their traditional crops - plantains, yams, and rice - but also adopted a wide variety of new crops from the Americas, including maize (corn) and cassava, which were brought to Africa by Europeans.

Farming led to rapid increase of population in the forest region. As the population grew, small groups migrated across the Ghanaian forest, searching for good farm land. Often these groups were led, believes Wilks, by entrepreneurs who used slave labor to do the initial work of clearing forest. Later, these entrepreneurs would invite free settlers to join them, and in this way new communities were created throughout the forest. These developments set the stage for state-building in the 17th and 18th centuries. Politically ambitious groups sought not only to establish control over gold production and trading, but also to impose their authority on the new farming communities in the forest. Consequently, formerly independent villages combined together in growing states. Whereas in the late 1500s Akan country contained at least 38 small states, by the mid-1600s it had only a handful, and by 1700 only one state ­ Asante ­ reigned supreme. The events which led to the foundation of Asante began with the rise of Denkyira, a state which waged wars to gain control of the Akan gold trade between 1650 and 1670. These wars led many refugees to flee into uninhabited forest regions. Among the refugees were the clan of Oyoko, who settled at Kumasi, the town which would later become famous as the Asante capital. Initially the small town of Kumasi had no choice but to become a vassal of powerful Denkyira, a situation which required not only that it pay tribute, but also that it send a hostage to live in the court of the Denkyira ruler as his servant. The chief of Kumasi chose a nephew, Osei Tutu, to become this hostage. According to Akan traditions, after becoming a distinguished general in the Denkyira army, Osei Tutu rebelled against the Denkyira king by refusing to hand over gold booty which he had captured in war. Then Osei Tutu fled home to Kumasi. His action must have marked him as a man of exceptional courage and leadership, for when the Kumasi chief died, probably in the early 1680s, the people of Kumasi selected Nana Osei Tutu as his successor. Osei Tutu soon expanded his authority, initially by placing the communities within a radius of about fifty miles of Kumasi under his control, and eventually by challenging Denkyira itself. In wars from 1699 to 1701, he defeated the Denkyira king and forced numerous Denkyira sub-chiefs to transfer their allegiance to Kumasi. In the remaining years before his death in 1717, Osei Tutu consolidated the power of his state. Osei Tutu was succeeded by Opoku Ware, who increased Asante¹s gold trade, tried to reduce dependence on European imports by establishing local distilling and weaving industries, and greatly increased the size of Asante. At his death in 1750, his realm stretched from the immediate hinterland of the Gold Coast to the savannahs of present-day northern Ghana. By this time it controlled an area of about 100,000 square miles and a population about 100,000 sq. miles and a population of two to three million.

As Asante(Ashanti) grew, it developed an administrative structure modeled on that of its predecessor Denkyira. Historians sometimes speak about Asante's "metropolitan" and "provincial" spheres. "Metropolitan" Asante consisted primarily of the towns in a fifty-mile radius around Kumasi. The rulers of these towns, many of whom shared membership in the Oyoko clan, participated in the enthronement of Asante kings, served on the king's advisory council, and retained considerable autonomy. By contrast, outlying Akan regions were more clearly subordinate and were forced to pay tribute to the Asante rulers. The most distant districts of the state which were populated by non-Akan people annually sent thousands of slaves to Kumasi." "Opoku Ware and his successors tried to centralize power in the hands of the king, or Asantehene. They placed all trade under state agencies controlled by the Asantehene, and created a complex bureaucracy to govern and collect taxes. They curbed the power of the military by creating a palace guard whose commanders were chosen by the Asantehene(Ashanti King) himself. Asante achieved a high degree of administrative efficiency (its well-maintained roads, for example, were famous) and the ability to implement sophisticated fiscal policies. Nevertheless, the Asantehene(Ashanti King) and his state always had many opponents. Opoku Ware himself barely survived a revolt by military leaders in 1748, while towns around Kumasi resisted interference by the Asantehene bureaucracy. Much of the opposition to the king came from a class of wealthy traders. The nineteenth century brought new adversaries: British traders and colonial officials who wished to end Asante control of coastal towns and trade routes. Between 1801 and 1824, Asantehene Osei Bonsu resisted the spread of British influence, and led the defense of Kumasi when the British attacked in 1824. Although Asante had exported slaves to the Americas throughout its history, when Europe gradually ended its slave trade in the 19th century Asante was able to compensate for the decline in slave exports by increasing sales of kola nuts to savannah regions to the north. Like virtually all African societies, however, Asante was unable to prevent European colonization. Its independence ended in 1874, when a British force, retaliating for an Asante attack on El Mina two years earlier, sacked Kumasi and confiscated much of its wealth, including its artistic treasures. Kumasi was captured by the British Army in 1873 (as a result of which much of the magnificent Asante gold regalia can be seen in London in the British Museum). After a final uprising in 1901, led by the Queen Mother of Ejisu (Nana Yaa Asantewaa) Nana Yaa Asantewaa Asante came into British Protection and finally became a region of the Gold Coast colony.

Asantehene = Means "The King of Ashant"i