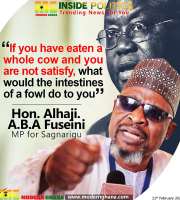 Government. Although Ghana's national government was originally founded on a British parliamentary model, the current constitution follows an American tricameral system. The country is a multiparty democracy organized under an elected president, a legislature, and an independent judiciary. It is divided into ten administrative regions, exclusively staffed from the central government. Regions are further subdivided into local districts, organized under district assemblies. The majority of assembly members are elected, but some seats are allocated to traditional hereditary rulers. Chiefs also assume the major responsibility for traditional affairs, including stool land transfers, and are significant actors in local political rituals. They are also represented in the National House of Chiefs, which formulates general policies on traditional issues.

Leadership and Political Officials. Indigenous leaders assume hereditary positions but still must cultivate family and popular support, since several candidates within a descent line normally compete for leadership positions. Chiefs can also be deposed. On the national level, Ghana has been under military rule for a good part of its history, and army leadership has been determined by both rank and internal politics. Civilian leaders have drawn support from a variety of fronts. The first president, Nkrumah, developed a dramatic charisma and gave voice to many unrepresented groups in colonial society. K. A. Busia, who followed him after a military interregnum, represented the old guard and also appealed to Ashanti nationalism. Hillal Limann, the third president, identified himself as an Nkrumahist, acquiring power mainly through the application of his professional diplomatic skills. Jerry Rawlings, who led Ghana for 19 years, acquired power initially through the military and was able to capitalize on his position to prevail in civil elections in 1992 and 1996. He stepped down in 2000, and his party was defeated by the opposition, led by John Kufuor.

Ghana has seven political parties. Rawlings National Democratic Party is philosophically leftist and advocates strong central government, nationalism and pan-Africanism. However, during the major portion of its rule it followed a cautious economic approach and initiated a World Bank structural adjustment, liberalization, and privatization program. The current ruling party (as of 2001) is the New Patriotic Party. It has assumed the mantle of the Busia regime and intends to pursue a more conservative political and economic agenda than the previous regime.

Secular politicians are dependent upon the electorate and are easily approachable without elaborate ceremony. Administrators in the public service, however, can be quite aloof. Traditional Akan chiefs and kings are formally invested with quasi-religious status. Their subjects must greet them by prostrating themselves and may talk to them only indirectly through the chief's "linguist."

Social Problems and Control. The Ghanaian legal system is a mixture of British law, applicable to criminal cases, and indigenous custom for civil cases. The formal system is organized under an independent judiciary headed by a supreme court. Its independence, however, has sometimes been compromised by political interference, and, during Rawling's military rule, by the establishment of separate public tribunals for special cases involving political figures. These excesses have since been moderated, although the tribunal system remains in place under the control of the Chief Justice. Civil cases that concern customary matters, such as land, inheritance, and marriage, are usually heard by a traditional chief. Both criminal and civil laws are enforced by a national police force.

People are generally wary of the judicial system, which can involve substantial costs and unpredictable outcomes. They usually attempt to handle infractions and resolve disputes informally through personal appeal and mediation. Strong extended family ties tend to exercise a restraint on deviant behavior, and family meetings are often called to settle problems before they become public. Marital disputes are normally resolved by having the couple meet with the wife's uncle or father, who will take on the role of a marriage counselor and reunite the parties.

Partially because of the effective informal controls, the level of violent crime is low. Theft is the most common infraction. Smuggling is also rampant, but is not often prosecuted since smugglers regularly bribe police or customs agents.

Military Activity. Ghana's military, composed of about eight thousand members, includes an army and a subordinate navy and air force. There is also the People's Militia, responsible for controlling civil disturbances, and a presidential guard. Government support for these services is maintained at approximately 1 percent of GDP. The army leadership has demonstrated a consistent history of coups and formed the national government for approximately half of the time that the country has been independent. Ghana has not been involved in any wars since World War II and has not suffered any civil violence except for a few localized ethnic and sectarian skirmishes. It has participated in peacekeeping operations, though the United Nations, the Organization of African Unity, and the West African Community. The most recent interventions have been in Liberia and Sierra Leone.