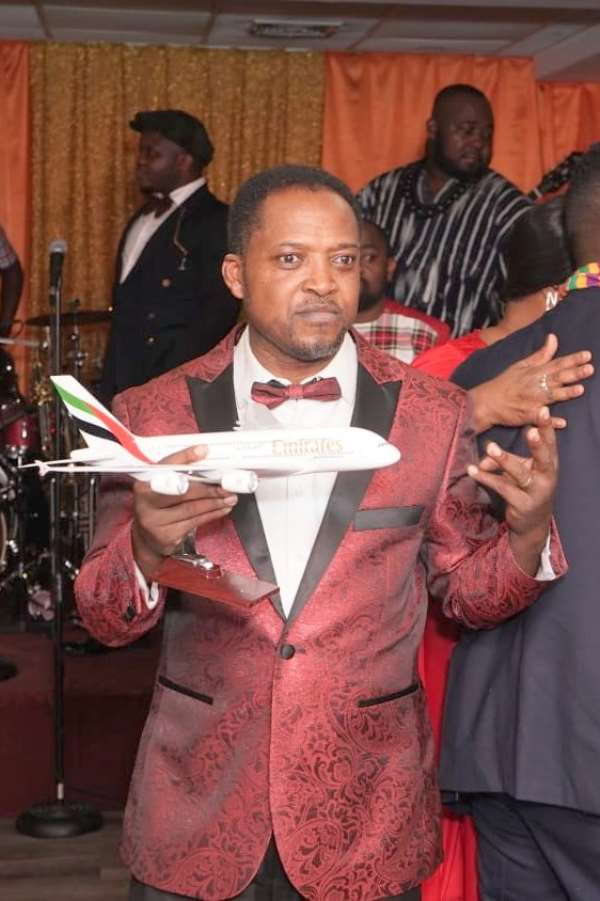 The year 2020 marks his 20th anniversary in the media industry as it calls for a grand celebration. The code name represents his 20 years of service in the Media Industry and Showbiz respectively, service to humanity, 12 years of publishing the 3G Magazine and the 10th Edition of the 3G Awards honoring unsung heroes. Further information would be available in due course.

The First of the activities marking the triple anniversaries is; 3G Media Presents Code 20:12:10 -Thanksgiving and Gospel Show will be in Bronx, NY on June 6th, 2020. The show will showcase many top Gospel Stars, Government Officials, Pastors, Nananom, family, friends, fans, his colleagues in Media & Showbiz and many Ghana celebrities. They are joining the Media Guru to thank God for how far he has brought him in the last 2 decades. The festivities would be crowned with the 10th Anniversary of 3G Awards/10th Edition in November 2020.

Mr. CNN was ushered into the media industry 20 years ago when his Pastor at the United Ghanaian Community Church in Philadelphia, Rev. Dr. Kobina Ofosu-Donkoh offered his camera to voluntarily take some pictures at the church during an event. It then developed into a hobby which translated to a profession in photojournalism. Mr. Francis Akoto of Ghanaweb spotted his potential and engaged his services for Ghanaweb He gained fame worldwide over a short period of time with his featured events and was invited to cover events all over the United States. A pivotal moment in his career was covering President Kufuor’s State visit to the White House in 2008 and President Bush’s and Obama’s state visit to Ghana. He then covered many events on Africa at the US Capitol. He has met and interacted with Presidents, royalty, crème de la crème in the entertainment industry and famous politicians. He captured the best of events before the emergence of social media. He established the quarterly 3G magazine in 2008, which he showcased his interviews and collection of pictures.

The pride of Mr. CNN is the success of his company, 3G Media, Inc ( www.3gmediaonline.com). True to its meaning “God, Global and Giving”, the Annual 3G Awards has become a mega event for Ghana’s best in entertainment, culture, sports, business, and churches. He serves as a role model to many young and upcoming Media prospects both in Ghana and in the diaspora

Mr. CNN is a Media Ambassador who has lifted the flag of Ghana in United States. He has also carved a niche for himself as being the International manager of renowned and upcoming artists in the music industry. He is on record to have promoted, covered and produced many shows in the United States for including that of Daughters of Glorious Jesus, Esther Smith, Stella Seal, Yaw Sarpong, Daddy Lumba, Kojo Antwi, Gyedu B. Ambolley, the late C. K. Man, Pat Thomas, the late Papa Yankson, the late Jewel Ackah, Nana Tuffour, Ernest Opoku Jr, Shatta Wale, Sarkodie and many more!!

Mr. Charles Nimmo Ntiamoah-Mensah has not only been recognized by many for his humanitarian work he has received several international awards and recognitions including a Universal Peace Federation (UPF.org) - Ambassador For Peace citation. UPF is An NGO in general consultative status with the Economic and Social Council of the United Nations, UPF supports the work of the United Nations, particularly in the areas of interfaith peacebuilding, peace education, and the strengthening of marriage and family.

He has also promoted many churches and Pastors who appreciate his vision to promote the work of God through the lens, online and 3G magazine.

Mr. CNN recently turned 51. He was born on December 24, 1968 in London, UK to Charles and Elizabeth Ntiamoah-Mensah. He holds a Master’s degree from Drexel University in Philadelphia (2000), and a BA from the University of West London (1995). He had graduated from Osei Kyeretwie Secondary School (1987) in Kumasi and grew up at Ayigya Zongo, Bompata and Patasi Estate respectively in Kumasi, Ghana.

He has been dutifully present at so many events in New York City that most people believe that he resides in New York and not in Philadelphia, where he lives with his wife; Rosemond and children. The family runs a one Stop Shop/Food Market in North-East Philly under the company name; Rosette Multi-Service(Parent Company of 3G Media)

Mr. CNN is also credited with being a co-founder and Chief Operating Officer of the New York City-based Ghana Chamber of Commerce-USA Inc.

He offers his thanks to his mentors, colleagues, partners, family and long loving fans over the years for their prayers and support. TO GOD BE THE GLORY!!