Three Things to expect at ‘Accra Movie in the Park’. 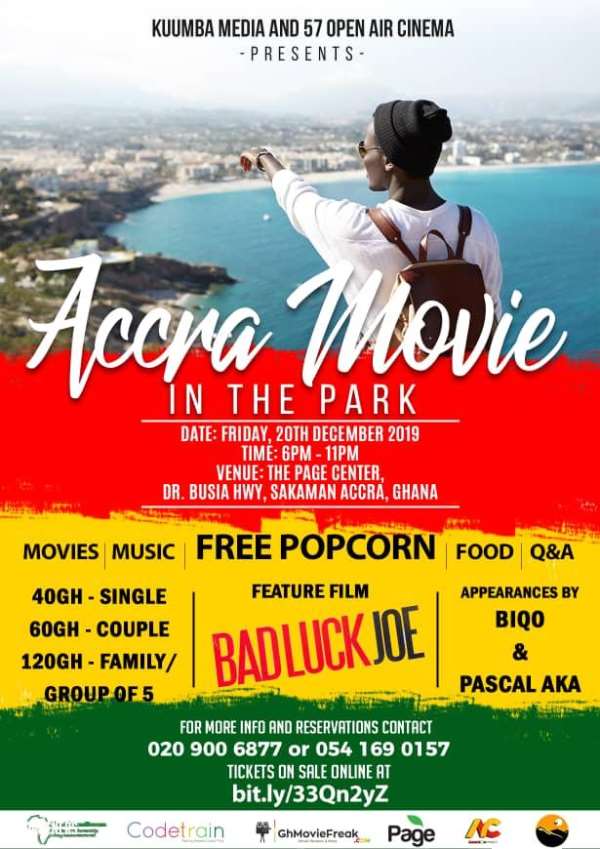 We are less than one week away from the BIGGEST movie event in Accra, Ghana. Here are three

things to expect at The Page Center in Sakaman, Accra on Friday Dec 20th, 2019.

Musical genius BiQo Music joins 57 Open Air Cinema and KUUMBA Media at Accra Movie in the Park with an amazing live performance. Some of his hits include soulful songs like ‘Hewale’ and pop fusion melody ‘For You’. You can miss his live performance. Follow his Sound cloud for more music: https://soundcloud.com/biqomusic/toptracks

2)The Stars Will Be There.

‘Bad Luck Joe’, by Ramesh Jai, is one of the biggest films of 2019. The film has been distributed by KUUMBA Media in American cinemas and it is making a return to its Ghanaian roots with this event.

The stars of the film are confirmed to make a special appearance at Accra Movie in the Park . Meet songstress, Adomaa and many more stars from the film. Follow KUUMBA Media as they announce the stars attending on Facebook, https://www.facebook.com/kuumbamedia.

3) Breakout Actor from Netflix’s ‘The Burial of Kojo’ will be hosting.

Award-wining Ghanaian film, ‘The Burial of Kojo’, blew our minds this year. The film’s outstanding performance by Joseph Otsiman has been recognized by many, including the African Academy Movie Awards and resulted in his nomination for Best Actor in a feature film. Joseph has earned his status as a breakout actor in African cinema, and he is bringing his talent to host Accra Movie in the Park.

Accra Movie in the Park is hosted by KUUMBA Media, in partnership with 57 Open Air Cinema. The event kicks off on Friday, December 20th, 2019. Our media partners are Gh Movie Freak, Accra Connect, Codetrain, The African Dream LLC and Sunset Multimedia.