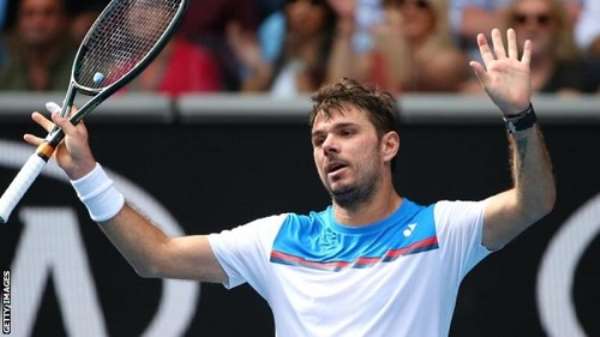 Stan Wawrinka produced some of his best tennis to battle past fourth seed Daniil Medvedev and reach the Australian Open quarter-finals.

The Austrian did not face a single breakpoint in a 6-2 6-4 6-4 win over the French 10th seed that took him to the last eight for the first time at Melbourne Park.

He will now face the winner of Monday's highly anticipated match between world number one Rafael Nadal and Australia's Nick Kyrgios.

Thiem, who was beaten by Nadal in the past two French Open finals, was in ruthless form against Monfils on Rod Laver Arena.

The Austrian controlled the match from early on, breaking in the third game. He then consistently put pressure on the Frenchman's serve, creating 14 breakpoints while giving away very little on his own serve.

The 26-year-old dropped just four points on his serve in the third set, serving out the victory to love.

His celebrations had been briefly put on hold when he thought he had sealed the win with an ace, only for the replay to show it was out.

But he took it on his second serve when Monfils netted a forehand, summing up an erratic performance by the 33-year-old Frenchman, who made 32 unforced errors and has now lost six out of six meetings with the Austrian.

"I think that I played my best match so far of this Australian Open. A very, very good feeling," Thiem said.

"The score looks way easier than the match was. I think I was lucky to make an early break in each set and then was managing to hold my serve well. I'm so happy because I'm for the first time in the quarter-finals here."