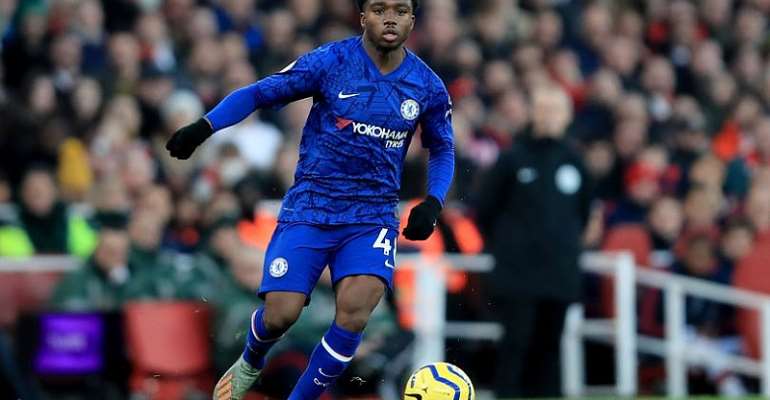 When Tariq Lamptey stepped on to the Emirates pitch in the 59th minute yesterday, becoming the seventh Chelsea academy product to be given a debut by Frank Lampard, the right-back was greeted by a predictable chant of "who are ya?" from the Arsenal fans.

Within seven minutes the 19-year-old had shown them a glimpse of just what he is all about and in many ways, his introduction, a performance full of zest, helped to turn the tide in a remarkable late comeback win.

Receiving the ball on the right, he cut inside and dribbled forward at pace. In front of him Tammy Abraham was peeling away from David Luiz Spotting the run, Lamptey slid in a delightful through ball that Abraham controlled before having his shot blocked by a diving Luiz.

It was Chelsea's clearest sign of intent yet and from there the visitors became increasingly dominant, preying on Arsenal's defensive insecurities.

"When he drove inside and slipped Tammy in I thought it was a great example of someone coming on and being fearless," Lampard said afterwards. "Sometimes that's what you get with youth."

For Lamptey it was the realisation of a dream. "My heart was racing," he told the club's in-house media channel. "

"I was thinking that this is the moment that me and my family have been waiting for, for a long time. Ever since I joined the club at the age of eight. Frank just said to me, be you, play your normal game and go out and enjoy it."

The teenager had been thrust into the matchday squad because of Reece James's ankle injury and concerns over Cesar Azpilicueta's hamstring. He was actually enjoying a Christmas break at home because Andy Myers's development squad do not play again until early January.

Beforehand Lampard had sought assurances from his assistants Jody Morris and Joe Edwards, who both played key roles in his development, that Lamptey would be capable of stepping in if required.

They were certain so a call was made and Lamptey headed straight for Cobham, where he took part in a light training session on Saturday.

The head coach asked Morris to again confirm the full back's capabilities - although it was more a question of character than talent - before telling him to get ready. Morris's reaction was unequivocal.

"My question to Jody when he came on was whether he had got the confidence and personality to deal with this, a tough game with responsibility to try and turn it," Lampard added. "Jody said 'yeah, no problem.'"

Now there is an expectation from many supporters that he will feature in the FA Cup game at home to Nottingham Forest next Sunday, if not in the New Year's Day trip to Brighton & Hove Albion.

That will be dependent on the fitness of James and Azpilicueta but there can be little doubt that he is up to such a challenge.

Lampard had been familiar with Lamptey, who has played for England at under-20 level but also eligible for Ghana through his father when he was doing a stint of coaching in the club's academy as part of his badges.

"I knew he has a different dimension as a right-sided wing-back," Lampard added. "He has pace, low centre of gravity and can go by people. Of course, he wants to work on his end product and all the last bits."

Yet Lamptey is out of contract in June and there are no guarantees that he will be signing a new deal. He is very keen to stay but, ultimately, it is a decision that rests on whether he can get regular game time.

Being given first-team minutes will make him feel more wanted but the exposure and the subsequent admiration will also strengthen his hand in those contract talks.

However, despite such a promising cameo, James is viewed as the future first-choice right-back and Azpilicueta, whose versatility is a major strength, still remains the go-to for big games.

Discussions have taken place and more are expected, while Lampard, along with Morris and Edwards, are convinced that he has what it takes to develop into a regular part of first-team squads going forward.

"We'll see," Lampard said of the contract situation. "He's talking with the club and hopefully he feels a bit of love from today as we've parachuted him in."

Yet this also throws up a problem for Lampard and his staff. No one can dispute how impressive it is to give seven academy players debuts in just over half a season but it will be impossible to keep everyone happy.

Not all are destined for big careers at Stamford Bridge and filtering them may perhaps be one of Lampard's greatest challenges going forward.