Messi, Argentina In Danger Of Missing Out On World Cup 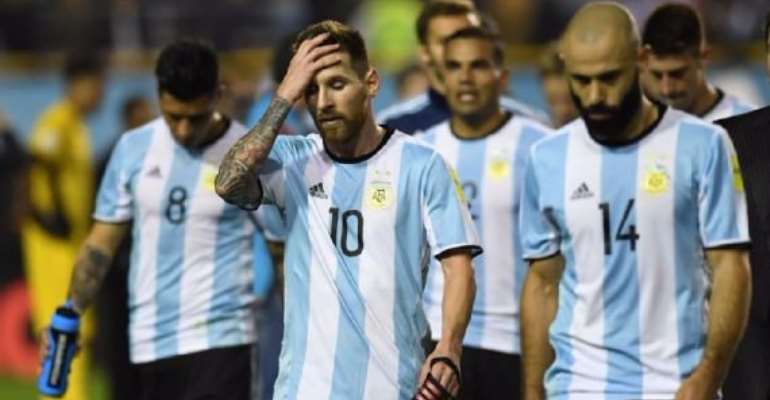 Lionel Messi and Argentina are in danger of missing out on the 2018 World Cup after a 0-0 draw against Peru in their penultimate qualifying match Thursday in the CONMEBOL region.

Argentina had multiple chances to score throughout the 90 minutes -- with Messi hitting the post from point-blank range and curling a first-half shot just wide of the post.

The result leaves them in sixth place in the South American table, outside of the top four spots that guarantee automatic qualification and the fifth-place spot that forces a playoff against New Zealand for a berth in Russia.

Messi, who would likely be playing in his last World Cup should the team qualify, has yet to deliver a major trophy for Argentina, but his manager, Jorge Sampaoli, is still confident they will find a way.

"Our situation is not very comfortable," Sampaoli said. "But it depends on us."

Argentina has scored just one goal in their last three qualifying matches under new coach Sampaoli after he took over for Edgardo Bauza before the summer, drawing all three under the former Sevilla manager.

"I remain confident we'll be in the World Cup," said an upbeat Sampaoli after the match. "It would really be unfair if a group that put it all out there -- like they did -- does not advance.

"Throughout the game, we had a marked advantage against them, but we could not break through."

Argentina, the runner-up to Germany three years ago in Brazil, plays their final match on Tuesday against Ecuador in the thin air of Quito in the Andes and can guarantee at least a spot in the playoff with a win.

However, Argentina has won just once in World Cup qualifying away to Ecuador since 1996 and would become the first country not to qualify for the World Cup after reaching the final since Czechoslovakia in 1962 and 1966.